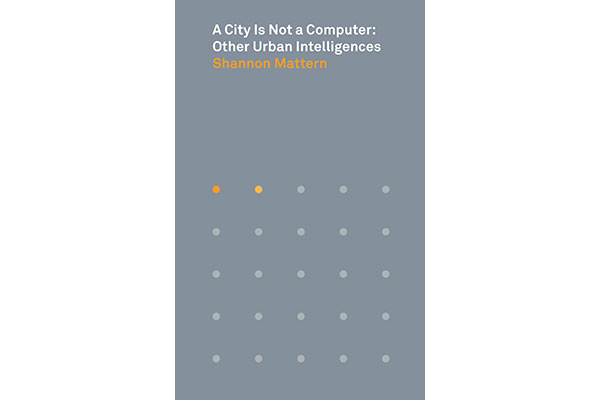 As we know, the world is in the thick of a data explosion that is affecting all facets of society and all disciplines. Urban planning and design are no exception. For several years now, a growing number of advocates, caught up in our technological ethos, have been rallying for data to drive urban decision-making processes at all levels. This has manifested itself in many ways—from the seemingly harmless creation of open-data catalogues accessible by the public to the development of urban dashboards used to visualize a diversity of data (real-time and otherwise) to determine the “health” of the cities. Amidst the frenzy are ‘smart city’ proponents who see a future where a growing number of electronic sensors of all sorts are used to monitor and manage city resources and services, ultimately supporting all facets of the urban world.

But as powerful as this image of the future is, many questions remain around what is left out of this computational mode of thinking? Cities evolved for thousands of years prior to our digital explosion—embedding the knowledge and wisdom of their creators within their physical structure—and too frequently those publicizing the data-driven city fail to acknowledge the intelligence embodied in cities past and present. Fortunately, Professor of Anthropology at the Professor of Anthropology at the New School for Social Research and prolific Place Journal writer Shannon Mattern has published The City Is Not A Computer as an attempt to balance the scales—critically arguing for the integration of different ways of knowing that prioritize racial, digital and environmental justice (and other forms of information difficult to datafy) into the computational thinking dominating city halls around the world.

For those who follow Mattern’s excellent work, The City Is Not A Computer is an elaboration of her piece of the same name published on Places Journal. More broadly, however, the book is the culmination to date of various themes she’s explored since her earliest works published over the past two decades. These have been capture across her three previous books—The New Downtown Library: Designing with Communities (2006), Deep Mapping the Media City (2015), and Code and Clay, Data and Dirt: Five Thousand Years of Urban Media (2017)—fragments of which her most recent publication draws upon towards affirming her argument around the limitations of a data-driven approach.

Divided into six succinct chapters, the Introduction—Cities, Trees & Algorithms—sets the stage for the rest of the book, opening with Christopher Alexander’s pioneering essay The City Is Not A Tree that contrasts two conceptual structures to describe cities, the (hierarchical) tree, and the ‘organic’ semi-lattice. Alexander argues for the latter, not the former, and Mattern uses the discussion to draw connections between the tree approach and “computational models of urbanism…”smart cities”, data-driven planning and algorithmic administration…that “impose their own restrictive logics…” and filter out any aspects that don’t fit that approach.

Consideration of the “tree” leads to an examination of ‘grafting’ as an urban practice—one where different layers accrete over time. In doing so, she describes the contemporary practice of grafting ’smartness’ onto historical urban layers, but more importantly, how this act of grafting as a form of urban intelligence that has been practiced for thousands of years encompassing “…countless other forms of local, place-based, indigenous intelligence and knowledge institutions…” that are often overlooked by the prevalent computational mode of thinking but are necessary correctives for the latter.

City Console builds from this foundation examining the urban dashboard as a recent phenomenon, and as a material object that embodies the “politics of data-driven urbanism.” This covers a brief history of the dashboard, its focus on control, its migration into urban governance, and its impoverished view of the rich dynamics of cities that cannot be represented within its algorithmic gaze.

The third chapter, after which the book is named, expands on this initial “tree” analysis and looks at the key urban metaphors past and present, with a focus on the more recent city-as-computer and its limitations. Within this context, she discussed Toronto’s Sidewalk Labs experience and what led to this data-driven project’s failure, highlighting the importance of other forms of urban intelligence that don’t lend themselves to datafication.

The discussion of libraries as important, unique forms of contemporary “not-purely-computational” urban intelligence enters the conversation at this time and is elaborated on in the fourth chapter—Public Knowledge. Drawing from the research that she began looking at at the beginning of the millennium, Mattern describes the pros and cons of the library-as-platform metaphor and proposes a more robust understanding of the library as a distributed “network of integrated, mutually reinforcing and evolving infrastructures”.

To this end, she convincingly goes into more depth about how libraries act as knowledge and social infrastructures—and that they can and should act as productively adversarial “spaces of exception” to  the “surveillant, extractive smart city.” However, despite her high praise, Mattern rightfully concludes that while libraries have the potential to be even more than the incredible public institutions that currently are, they cannot be called upon to be the only such places in society. More is required to counter the ill effects of the computational model of urbanism.

Maintenance Code gives readers a taste of one such counter-position, focusing on the hidden knowledge around the maintenance and care of urban material at the different scales…knowledge that is critical for the proper function of the contemporary city. Four scales specifically are discussed in descending scalar order moving from the repair of urban infrastructure (“Rust”) through architectural maintenance (“Rust”) to objects (“Cracks”) and ending on the humans who “clean and maintain data” for all types of applications, software platforms and portals used by society (“Corruption”). As with the other chapters, her narrative incorporates a number of strong examples and initiatives.

The concluding chapter—Platforms, Grafts & Arboreal Intelligence—uses a brief discussion of the high profile ‘tabula rasa’ Hudson Yards redevelopment in New York’s and its shortcomings as a springboard to reinforce the importance of incorporating different ways of knowing into transforming the urban landscape. In a clever thematic loop, this leads to the final analysis of the book focusing on trees—not in the metaphorical Alexandrian sense of the Introduction, but in real physical and ecological terms.

With this in mind, she examines a number of interesting projects, writings and initiatives—such as Anna Tsing, Jennifer Deger, Alder Keleman Saxena and Feifei Zhou’s interactive Feral Atlas and Sam Bloch’s excellent Places Journal piece “Shade”—that point in the direction of the power of ‘grafting… computational approaches onto other ways of knowing other modes of mapping, other metaphors…”. A strong ending that does well to tie various strands of thought described throughout the book.

Overall, The City Is Not A Computer puts forth a much needed, audacious argument about the limitations of data-driven, computational thinking currently supported by countless municipalities and ‘smart city’ advocates. Accessible and provocative, Mattern is at her best, succinctly weaving constructively critical insights with wide ranging examples towards an urbanism of wisdom that tempers its focus on efficiencies with environmental justice, social sensitivity, and indigenous knowledge. Truer words have not been spoken when she describes such a city being “smarter than any supercomputer.”

For more information on The City Is Not A Computer  visit the Princeton University Press website.