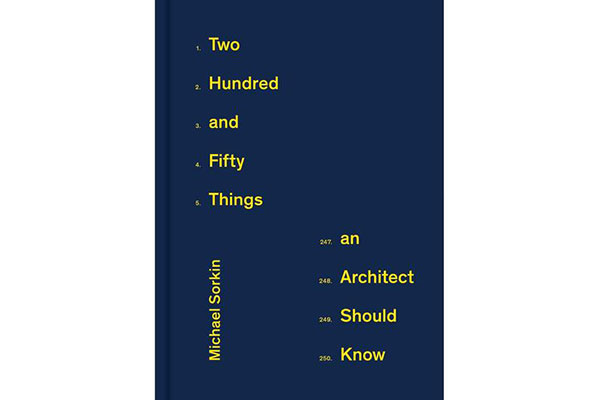 Equal parts poetic, practical, playful, and wise, Two Hundred and Fifty Things an Architect Should Know presents a compelling and perceptive list of essential knowledge that Michael Sorkin composed during his renowned career as an architect, urbanist, critic, and force for justice and equity in design. In this first posthumous collection of Sorkin’s work, entries are paired with 100 poignant and elegant color and black-and-white photographs, illustrations, and archival images.

In this all too brief yet enjoyable book by the late Michael Sorkin, the architect and urbanist has provided us with his greatest hits list, released posthumously as a 144-page publication from Princeton Architectural Press, and accompanied by 100 photos and illustrations. Originally published in Sorkin’s What Goes Up in 2018, the list has circulated online since then on various architecture and planning websites, where one can instantly see all 250 items by simply scrolling through them. The book is then the act of grouping them in various aphoristic clusters, ranging from a half dozen to a single ‘thing’ to give it added emphasis.

More than just the author’s literal bucket list, the book is also incredibly personal—featuring several experiences of his daily existence, like finding three nearby lunch spots within walking distance of his office (#138). As well, included here are several abbreviated observations from such books as Twenty Minutes in Manhattan (2009) and All Over the Map (2011). Sorkin wrote twelve books in his lifetime – including my favourite, Exquisite Corpse (1994) – edited even more, and was published and lectured all over the world, so his list of influences and life experiences are invaluable to any architect and designer’s education, here now all able to fit in the palm of one’s hand.

Ultimately, the book is the collection of life lessons Michael learned over the course of his too-brief 71 years on the planet—the thinkers and urbanists that influenced him, places he had visited, invaluable skills he learned during his architectural training, and concepts and qualities that have informed his experience, both as a design professional and a human being. I found the most poignant of Sorkin’s observations at the centre point of the book, #124 – How to Listen Closely, as the ultimate lesson for how an architect should work with their client.

The question of whether the items are ranked in order of importance is never answered as there is no introduction from the author, perhaps as he wished it to be to keep us guessing. One is reminded throughout of Michael’s particular sense of humour, and there are several whimsical moments like #169 -What makes you Happy, and #96 – How to get Lost. My sense of the book’s agenda is that it provides a general collection of architecture and planning tropes, sometimes collected in groups, like #176-178 – the Nolli Plan, the Cerda Plan, and the Haussmann Plan – and other times playing on words, like with #161-164, Geodesic, Geodetics, Geomorphology, and Geography.

All of Sorkin’s heroes are here, including Jane Jacobs (#34), Vitruvius (#58), Walter Benjamin (#59), Aristotle (#112-113), Archigram (#186), and Rachel Carson (#234). And much like Vitruvius himself did in his canonical de Architectura, Sorkin lists some things that would be helpful to an architect’s education, like #160 – A bit of chemistry and physics, along with #146 – A smattering of naval architecture, with my personal favourite being #202 – How to play a musical instrument.

And not unlike the wildly popular book and series 101 Things I Learned in Architecture School (2007), Sorkin here provides some gems of his own, like #201 – Good model-making Techniques in Wood and Cardboard, and #246 – How to draw an Elegant Section. His architectural lessons touch on both the past and the present, noting the importance of BIM in #17, followed closely by how to clean a rapidograph pen. He waxes nostalgically for the days of drawing perspectives by hand (#91), and reminds us to continue to learn the lessons of the past, as in #15 – What Victor Hugo really meant by “this will kill that.”

As one would expect, the list of places here that Sorkin has visited is extensive, with the most influential to him clearly being the ones where he describes the experience of being there rather than just a place-name. Examples of this include #67 – What it’s like to walk the Ramblas, and #171 – The view from the Acropolis. Other honourable mentions include the Pyramids and Duomo, along with understanding how they were constructed. And without a doubt it is #133 which does the heaviest lifting here, providing a list of 12 cities in one single entry that Sorkin has visited and found his way around.

And while much of the material here is attuned to the education of a design professional, often with inside jokes—like #47 – What the Brick Really Wants—there is at its most fundamental level a shortlist of things that make life worth living, like #128 and #129, Good Bordeaux and Good Beer respectively. This along with his particular observations of the human qualities we all share, like #1 – The feel of cool marble on Bare Feet, and #85 – The smell of Concrete after Rain, gives us an insight into what the author felt were fundamental to being a good global citizen, respectful of other cultures and ideas, always challenging outdated conventions where he saw them to continue the process of urban evolution.

When history looks back at 2021, there will be much said about why western civilization failed to learn from recent catastrophes, whether financial or environmental, in preparation for the current pandemic. Much has already been said about its impacts on our cities and the effects of mental illness as well as other epidemics it has created.

What is indisputable is that to have had such a vital voice who could speak for us taken when we needed him most is a compounded tragedy. Now more than ever we need voices like his to speak out against the silos of corporate consumerism that the forces of globalization have enabled, which along with the fallout from social media would all but shut down society’s innate kindness and conscientiousness.

For this reason, Two Hundred and Fifty Things an Architect Should Know is more than just a collection, it is a palimpsest, as its author would have each of us add to the list, rewriting lessons he himself would admit need to be updated for the next generation of urban designers to come. It is also a celebration of Michael Sorkin himself, and will certainly be a source of inspiration for many architects, planners, and educators for many years to come.

For more information on Two Hundred and Fifty Things an Architect Should Know, visit the Princeton Architectural Press website.