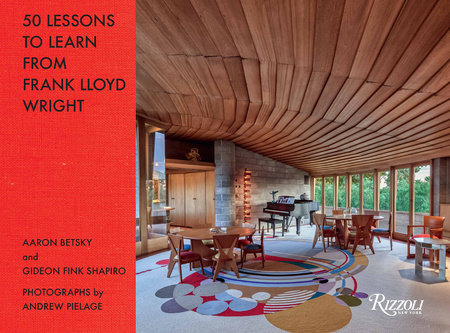 This book presents the work and imaginings of this iconic architect in an accessible and compelling form, including color photographs, drawings, quotations from his writings, as well as newly commissioned diagrams and thoughtful analysis. Each lesson is accompanied by pearls of wisdom gleaned from the master’s writings on architecture and design.

As noted by ADFF founder Kyle Bergman at last year’s Vancouver screening of Unity Temple: Frank Lloyd Wright’s Modern Masterpiece, there is not too much left to say about Frank Lloyd Wright that hasn’t been said already. Many will know that in 2019, UNESCO declared eight of his buildings as World Heritage Sites, and there has been perhaps no other architect with as many publications released as him. But as that movie made abundantly clear—along with this new handsome book from Rizzoli New York—the master-builder continues to be relevant to both the education of young architects, as well as the stuff of inspiration for professional architects, historians, and educators alike.

In this new book from editors Aaron Betsky and Gideon Fink Shapiro, we are presented with 50 modern sound bytes of Frank Lloyd Wright, each a beautiful and evocative visual aphorism, shaped by the wisdom of Betsky, who for a number of years was Dean of the Frank Lloyd Wright School of Architecture at Taliesen West. The unfortunate events that led to the school’s closure in 2020 are the reason Betsky is now Director of Architecture at Virginia Tech, and is perhaps the reason there is very little meta-text accompanying the 50 lessons.

For one could not ask for a better guide to lead us through the work of FLW than Betsky, whose voice currently continues to be one of the most poignant in the ever-shrinking world of architectural criticism. His all too brief time as Dean at the school would’ve meant breathing the great architect’s wisdom daily like oxygen, so to have so much of it summed up in this 248-page treasure of a book is an exceptional treat, to say the least.

Along with the editorial assistance of Shapiro, Betsky has raised the bar by having Andrew Pileage shoot all-new photography of FLW’s work for the book, including some never before seen buildings. And as an added bonus, Betsky has also commissioned Metis artist Richard Quittenton to come up with twelve new visualizations for the book, including an exploded axonometric of the Robie House entitled  “Break the Box” in the book’s opening pages.

Each lesson has been carefully formatted to be accompanied by a rich visual armature, including photos and drawings, the latter of which would’ve had much at the FLW school to draw upon, with individual lessons organized into small thematic clusters such as “Site and Landscape,” “Design and Society,” and “Building and Body.” Each of these groupings provides the book’s structure, with the book’s first stand-alone lesson being “Break the Box,” which Betksy notes in the book’s brief Preface is one lesson that is present in all the others.

For as Betsky notes, “the first and most important lesson of the book is “Break the box,” which is not only about physical form, but also the possibility of freeing ourselves from social and mental constraints.” Whether it is discussing the lesson of “Open the Corner” or “Reach out Beyond,” the lesson of the boundaries of the box pervades all others, as similarly Betsky often returns to it in the book’s narrative.

The book also provides an opportunity to show many esteemed projects along with many lesser-known Usonian structures, alongside numerous shots of both Taliesins. His most famous structures are here—Fallingwater, the Guggenheim, Unity Temple, and the Robie House—with new photography and drawings of his concrete textile houses in LA, including new shots of both the Hollyhock and Ennis Houses. And yet other lessons feature non-building examples, including his furniture, stained glass windows, and textile designs.

The book’s opening visual salvo includes a new photograph of Fallingwater, taken at a perfect perpendicular plane to the balconies cantilevering over the waterfall, as well as photos of the newly restored Unity Temple. Also included with the photography are stunning reproductions of FLW’s drawings, including many from the Wasmuth portfolio, along with new drawings Betsky would’ve had access to while Dean of the school.

Perhaps one of the most famous drawings from the Wasmuth series on display here is the perspective drawing of the Robie House, featured in the book’s opening pages, with one of my favourite drawings much later in the book on pages 164-65, featuring a wonderful red-ink two-page perspective of the Johnson Wax administration building.

With something here for everyone – and especially so for FLW enthusiasts – this book is an inspiration and wonder to behold, a much-needed beacon of creativity in a time of otherwise banal reproductions. All said and told, Betsky and Shapiro have accomplished here what they set out to do and some, that is to make Wright’s work relevant to our new digital hyper-information age, demonstrating how ideas from over a century ago remain timeless and applicable to our complex modern world.

Not to be missed, 50 Lessons should be on every architect’s bookshelf as a handy reference to this influential architect’s core design principles, with its stunning collection of new photography and drawings transcending all we have previously seen of the architect’s visual vocabulary.

For more information on 50 Lessons, visit the Rizzoli website.