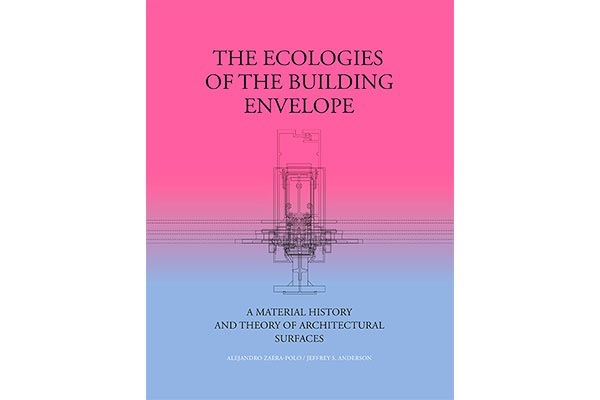 Given the number of books I read and review every year, it is rare to be surprised by a book. Like all cultural products, patterns in the themes, content, and structure of books readily appear with enough exposure. So, I feel fortunate to have had the opportunity to read The Ecologies of The Building Envelope: A Material History and Theory of Architectural Surfaces.

As most students and academics know, typical theory books—especially those on architecture—are often challenging to wade through, no matter how meaningful the narrative. So, admittedly, I was very hesitant upon receiving the book, given the blatant reference to theory in its title. But my interest was piqued almost immediately upon flipping its first numberless page open: where Alejandro Zaera-Polo gives the most memorable, pointed dedications I’ve read to date—a sharp blade strike to the jugular of the academy, and scholarly protectionism and pettiness. To my mind, this dedication alone is worth picking up The Ecologies of The Building Envelope and it’s a shame that Actar kept it out of the pages accessible through its website.

Given such a spirited opening, I was compelled to see if the book would deliver on its promise of breaking the standard academic mold, and giving readers something truly worthwhile. Or whether it would follow in the tracks of so many architectural theory books, fertilizing vast tracts of landfills the world over.

Did it live up to expectations?

If giving an architecture bibliophile and design theory teacher an enhanced appreciation of the complex systems that service a seemingly mundane architectural feature—the building envelope—is any indication, then the answer must be a definitive yes! Let’s be clear, however: the focus of the book is building envelopes, so this will naturally limit the audience to those who enjoy the more technical side of architecture.

So, readers are thankfully neither slapped in the face with an over-conceptualized theory of building envelopes or facades nor blinded by jargon-filled technical manuals about the minutia of building envelope construction and detailing. Yes, these books have their place, but as squarely stated in Zaera-Polo’s dedication, most of these are done by  “puppets who think themselves authors, only capable to repeat what they have heard.” To the point of oversaturation.

In contrast, The Ecologies of The Building Envelope rides a fine line: grounding a “theory of architectural surfaces” within socio-cultural and economic realities of particular time frames. As such, the book’s motley crew of architectural characters—from mullions to caulking, membranes to joints, acrylic to mirrored glass, mortar to titanium, insulation to tar paper—unfold, not as the heroes and heroines that have evolved to a current “perfect” state based on merit. Instead, they are seen as emerging out of chance, as much as anything else. Right place, right time.

And so we see our many precious, beautiful architectural achievements alongside their not-so-pretty lineage, much of which lies well outside of the architectural discipline inside the messy trenches of industry—a dirty secret often held close to the chest of refined design practitioners. A strange maze of narratives filled with glorious triumphs as well as exploratory dead-ends…..some potentially waiting for rediscovery!

Although some jargon must necessarily slip into such a targeted book, the ultimate result is a very accessible piece of work as precisely detailed and rich as the building envelopes and systems described within. As such, I do not hesitate to say that The Ecologies of The Building Envelope: A Material History and Theory of Architectural Surfaces will give its fortunate readers a refreshing take on a seemingly mundane subject in dire need of a new story.

For more information on The Ecologies of The Building Envelope, visit the Actar Publishers website, where you will even be able to access 88 pages of the book via Issuu.