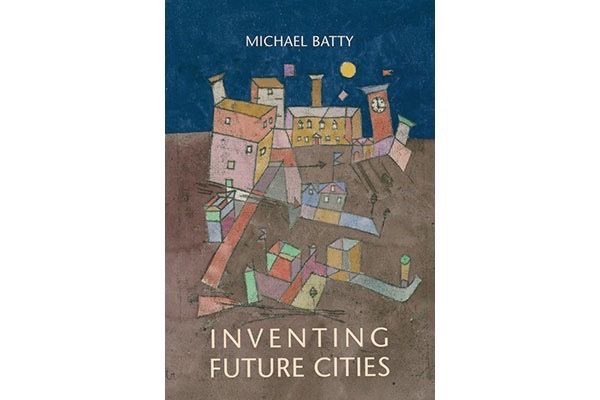 Given the state of the world, it is fair to say that the future of cities is intimately intertwined with the future of the planet. The distinctions between the built and natural environments have quickly melted away, with our settlements—and the complex systems that support them—affecting the globe in ways beyond our comprehension. This awareness has developed as a result of the exponential growth in data about the world around us and, given the complexity of the issue, few credible people are currently willing to seriously forecast what the future of the city will be. Enter Michael Batty, whose recent Inventing Future Cities embraces the unpredictability of cities and instead investigates what we need to know about cities past and present, in order to invent them in the future.

As the current Chair of the UCL’s Centre for Advanced Spatial Analysis and the award-winning author of Cities and Complexity and The New Science of Cities, Batty’s work around the nature and workings of cities speaks for itself. Mentored by the renowned Sir Peter Hall, he is of a tradition of great thinkers—including Constantinos Doxiadis, Nikos Salingaros and, more recently, Geoffrey West—whose work focuses on a rigorous, scientific approach to the understanding and planning of cities. Batty’s specific interests connect complexity theory, networks, flows, and their relationship to the functioning of cities.

Those who follow Batty’s body of work know that his previous books were not for the faint of heart and well beyond the general reader interested in learning about cities, despite the allure of their titles. Inventing Future Cities deviates from this expert-focused pattern, providing an engaging, accessible read on urban complexity, key principles underlying the creation of cities, contemporary urban research and their implications on how cities can be “invented” in the coming decades. This is done across 8 succinct, interconnected chapters that weave together to form a compelling argument.

The first chapter—Predictability, Complexity and Inventing the Future—acts as an introduction, laying the foundation and overarching argument for the book: that the complex nature of cities and urban systems makes them ultimately unpredictable and that cities are acts of dynamic invention. To do so, Batty concisely discusses the uncertain nature of both short- and long-term predictions as it pertains to complex systems, followed by a brief summary of the emergence of complexity theory (connecting it to the wonderful insights of Jane Jacobs) and the notion of gradual, bottom-up adaptations. This serves to hone Batty’s approach to focus on processes over artifacts, invention over prediction…or, in his words,  “inventive processes….’inventing’ rather than inventions per se.”

This chapter also importantly introduces the 5 principles Batty believes apply to all cities across time: ones that are further examined and reappear a number of times over the course of the book:

Although it is easy to get into the minutia of proving these principles, Batty does so very casually, shying away from his more common mathematical approach. These, in turn, provide the framework from which future speculations on the city must spring, Batty argues. The rest of the book explores each in more detail and their implications on thinking about the city.

The journey begins with a necessary speculation on the growth and transformation of the world population over the course of the next century, particularly in light of the progression from a non-urban to urban living we are witnessing currently. This is the focus of the second chapter—The Great Transition—where Batty highlights issues such as demographic shifts and the ongoing rapid globalization, as well as the distribution and the potential number of cities. Naturally, Zipf’s Law is discussed as a “convenient approximation” for the distribution of city sizes. Given the nature of the content, this chapter is the most data- and graph-heavy of the book, but not overwhelmingly so.

Defining Cities speaks to the challenges in attempting to define the city as a physical entity and describes cities as hierarchical clusters that exist across scales. In doing so, he quickly touches upon Christopher Alexander’s critical insights of the ‘semi-lattice’ structure of a city outlined in his seminal essay “The City is Not A Tree”,  the transition from ancient ‘polis’ to the modern ‘megalopolis’ as well as the Glaeser’s paradox, outlined above. Also important in this chapter is his explanation of the 3 standard criteria for defining cities, since one in particular—the measure of interactions (material and people flows and linkages) between populations—is critical to his greater argument.

As the title of the next chapter suggests, Form Follows Function—Or Does It? delves into the physical form of cities, arguing that the growth of new communications technologies has led to a sharp divorce between urban form and function. To do so, he quickly charts the evolutionary form patterns of cities from pre-history to present. Johann Heinrich von Thünen’s Standard Model is described within this context, as is more in-depth focus on the impacts of flows introduced in the previous chapter. The chapter ends with an interesting analysis of the how people have defined the ’optimal city’ over time.

The latter discussion around flows builds up to The Pulse of the City that more thoroughly explores of different ‘pulses’ that define the modern city—that is, temporal cycles and flows that have come to light as a result of new digital information. Although the influence of social media is described briefly, Batty focuses on transportation and mobility dynamics. This leads to a brief speculation on how flows will affect the future city and the importance of understanding urban networks as we move forward.

Outward, Inward, and Upward: Suburbs to Skyscrapers is named after the 3 types of urban growth and development outlined within the chapter. Beginning with an important elaboration of  H.G. Wells’ proposition on urban growth and the distribution of populations in response to transportation type. The rest of the chapter is dedicated to an interesting examination of the dynamics behind the 3 types of growth—outward (sprawl), inward (urban renewal) and upward (skyscrapers)—in more detail. It ends with Batty reinforcing the limitations of focusing on physical form as indicative of the many forces shaping cities: stating that many invisible processes (for example, new communication technologies) are greatly influencing our current urban environments and will continue to do so in the future.

The Sixth Kondratieff: The Age of the Smart City refers to theory of economic/technological cycles put forth by Russian economist Nikolai Kondratieff whereby waves of technological innovation get shorter and more intense over time. So much so that they are now beginning to coalesce and force cities to evolve accordingly. Tobler’s first law of geography is detailed within this context, as Batty describes the change in space and time driven by changing technologies across history. Naturally, the chapter includes discussion around the rise of Smart Cities and the “Information Revolution”.

More importantly, however, this chapter also marks the point where all the principles begin to consolidate and readers start getting a clearer picture of the implications of their interaction: something that is more fully explored in the final chapter, The Inventive Century, within which Batty argues for the city as a product of human inventiveness, describing how the 5 principles can be used to speculate on how we might invent future cities. As described earlier in the book, the focus is on process: away from the explicitly physical towards invisible patterns. The implication on social structure and inequality is touched upon, as is a brief look at the implication of climate change and population migration. Purposefully, and in keeping with Batty’s larger argument, he shies away from proclaiming a general theory or explicit solutions.

Overall, Inventing Future Cities was a thoroughly enjoyable, wonderfully accessible deviation from Michael Batty’s typical form. This is not to take away from the validity and importance of his prior works. However, by distilling his vast knowledge and expertise to the point where general readers can easily engage it, he has drastically increased the range of his important voice—something many intelligent and worth scholars on the urban environment fail to achieve. As such, I would dare to say it is his most important book to-date…a must-read for anybody and everybody invested in the future of our cities.