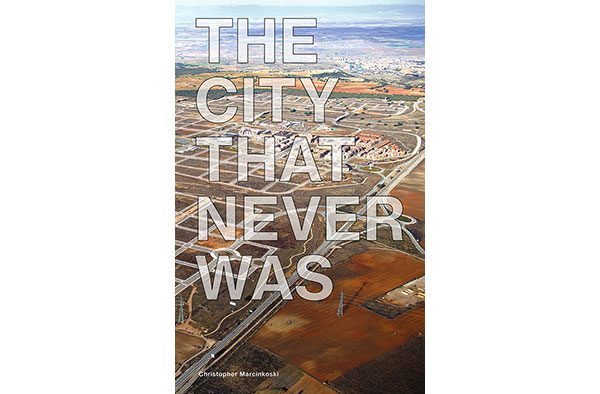 The world captured within The City That Never Was by Christopher Marcinkoski reminds me very much of a JG Ballard novel titled Millenium Peopl —whom I am now realizing seriously had his finger on the pulse of urban life when writing his novels in the late 60’s. Residential super-complexes, mega masterplanned communities with all the possible amenities your heart could dream of, all of the most incredible promises made by politicians and developers (no matter the country) to push a dream that may or may not be true. Through gripping and insightful writing and even more stunning photography, Marcinkoski paints a bleak picture of the past, present, and future of speculative urbanization: an act that he feels doesn’t get as much focus as it should.

The book is structured in a very easy to comprehend way, with each section reading like it’s own essay or set of essays (depending on the topic he sometimes writes about multiple places in deferent pieces). There is a lot of jumping back and forth between striking visual images and dense pages of rich text, which make his arguments exceptionally stronger. Marcinkoski utilizes this powerful form of storytelling/exposition at every possible point. The book begins with the essay mentioned above about speculative urbanizations history, and then dives in to case studies of cities around the world, followed by a brief and concise conclusion. Marcinkoski allows the ghost towns of cities tell the bulk of the story without much interference.

While Marcinkoski states in his introduction that many works have been written on the financial crisis that gripped the world in 2008 and the effects that rippled around the world, he feels that not enough focus has been placed on speculative urbanization beyond that brief window within which it was starkly illuminated for many people. The term ‘Speculative Urbanization’ refers to “the construction of new urban infrastructure or settlement for primarily political or economic purposes rather than to meet real (as opposed to artificially projected) demographic or market demand.”

In his first section, A Brief History of Speculative Urbanization, Marcinkoski points to several accounts of speculative urbanization (as far back as ancient Rome), proving that this is not a new phenomenon. Through misguided hype about something like a new metro line opening, lofty goals and promises are made that have no hope of being realized and these places are left to dissolve back into the earth, forgotten. This is a far deeper reaching problem than solely the 2008 financial crisis and Marcinkoski wants to show us other places that have been affected by this way of planning an developing.

One of the most engaging parts of the book—titled Products of the Boom and Bust: Case Studies from the Madrid Metropolitan Region—focuses on the Madrid region of Spain, and all of the odd and sometimes downright depressing issues that have arisen there. The most gripping section revolves around Ciudad Valdeluz, “sixty-five kilometres northeast of the centre of Madrid…characterized by questionable land transactions, possibly motivated by backroom political machinations and unrealistic development projections predicated on the potential transformative effects of newly installed mobility infrastructures.”

Ciudad Valdeluz is a veritable ghost town, a series of interconnect roads and traffic circles that lead to more and more empty space; overgrown lots that have been reclaimed by the earth, with a scattered array of housing units sprinkled throughout. The photography of these areas is breathtaking, insofar that it is downright chilling to see something so discarded and utterly forgotten. The aerial photography leaves no questioning about the massive scale of failure, as the landscape looks part post-apocalyptic, and part dystopian future……yet, as the book so poignantly makes explicit, this is not science fiction. Places such asCiudad Valdeluz are very real, they continue to be built as a result of speculative urbanization.

This being the case, The City That Never Was portrays a cautionary tale about what happens when situations are rushed into with lofty ideas but no feasible plan; when greed overrules proper planning and the drive to make something out of nothing is allowed to take its toll. Sure, this process will sometimes pay off, but far-reaching effects of their failures are significant, as they have huge impacts on their surrounding neighbourhoods, on the economies of the cities that house them, and on their natural environments. As Marcinkoski states, “the phenomenon demands that design and planning develop new tools and techniques capable of limiting the potential social, environmental, or fiscal consequences that accompany the pursuit of these speculative endeavours while also looking to inflect the root logic of their pursuit.”

What seems clear after reading this powerful book is that as projects continue to get bigger and bigger, the industries, politicians, and trades that make these projects a reality need to stay progressive and be critical of their work—at all scales—to ensure that our future cities will work and make sense in the context within which they are situated.

For more information on The City That Never Was, please visit the Princeton Architectural Press website.