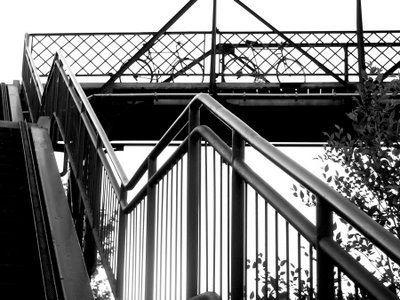 So, what is the West Toronto Railpath? It’s going to be a beautiful linear park in a neglected part of the city’s west end. (More background available in a previous post.) But, the Railpath is not going to be a bike trail. It is not a bike path, and, it is most certainly not a cyclist commuter “highway.”

On Monday night, the plans for the Railpath were presented to the public. I asked Councillor Adam Giambrone (Ward 18-Davenport) why the WTR is considered part of the bike plan. He conceded that the current plans provides “little value” to cyclists, but said that eventually the Railpath would serve as a “bike highway” for cyclist commuters.

This is where he and I differ — and here’s why: GO will be expanding service in this CN corridor (even if the Airport Rail Link never happens) and there is no logical reason why CN would ever sell the land to the City as CN generates revenue by renting rail time to other train services. I believe the “rest of” the WTR will never be built, and if anyone has any evidence that it might some day be built, please do pass it on to restore my hope.

It really should not be a surprise to anyone that cyclists have been pretty excited about the potential for a sweet, car-free 6.5 km ride from the west end to downtown since the Railpath plans came to life in the late 90s.

A Globe and Mail story in July of 2005 titled, “Proposed trail could be an expressway for cyclists” hailed the WTR as a cyclist’s dream. But the March 2006 NOW article titled, “Pedestrian speedway cut off at pass” presented a more realistic analysis of the conflicting plans of the WTR and the airport link.

After years of waiting, the plans were laid out for all to see on Monday night. And, as gorgeous and green as those plans are (courtesy of Steve Torrance and Brown + Storey), I simply do not see how anyone can call the WTR park a bike path.

The WTR park itself is between 10 and 15 metres wide. The strip of asphalt (the “multi-use” path) will be 3.5 metres wide (1.75 in each direction) with a granulated shoulder. The length of the path is 2.1 kms.

There are great examples of multi-use trails everywhere. One obvious example is the Seawall in Vancouver. It is truly multi-use as there are two paths, one for walkers and one for roller bladers and bicycles. The Route Verte is possibly the gold standard for off-road multi-use trails in Canada. (See the picture at the bottom for “off-road” paths.) A multi-use trail is designed to permit more than one user group at a time, creating a two-way shared use area. The paved portion of the WTR is simply too narrow to accommodate multiple users safely. There was some discussion about the City’s new way-finding signage (to be used in the Don Valley trails first) that could be used in the Railpath to help direct user etiquette. It was also mentioned that the path will only be plowed in winter if the City deems there is “need.”

In an article yesterday, the National Post quotes Giambrone: “It is the first part of a network in the west end of bike paths that will allow people to get around the city without having to go on the street.”

Network implies connectivity. So what other cycling infrastructure does the path connect to?

There are no existing bike lanes on any of the residential streets that conect direcdtly to the park. There is a new bike lane on Annette that the City envisions eventually connecting to the Railpath. The south end of the park connects to the street via a ramp that brings the trail right to the Sterling-Dundas intersection, but a little more to the Sterling frontage. There are bike lanes painted on Dundas over the bridge. The north end of the park is very close to Dupont, where a 1-km stretch from Dundas to Lansdowne of bike lane is to be installed this year.

At the north end, steps will be installed at both Dupont (north side only) and Bloor with bike gutters. The steps connect to the sidewalks. Capital project co-ordinator for the Railpath, Dave Nosella, said there is no way around this, and that the City recognizes that this is not ideal for cyclists. He added:

“This was the preferred option of Cycling Infrastructure staff for the grade separated connections, but it was agreed that the on-street connections make the most sense. In the short term, cyclists can connect to the trail by either turning south on Edwin Ave, and connecting at Ruskin Ave, or north on Osler, connecting to the trail from the path just north of the fish warehouse. Longer term, when the Viceroy site is redeveloped, Parks will be looking for a ramp access to the trail on the south side of Dupont, and another street connection at either Alpine Ave or Clark Cres.”

The on-street connections will be signed, once the WTR is completed.

While we’re on the topic of the network, I think it is relevant to mention here that the monetary allotment for the Bikeway Network (via Trails and Pathways), within the Parks, Forestry and Recreation budget, is seriously under-funded. There is no staff person within PF&R dedicated to trail construction and stewardship. Please note, the funding for the WTR does not come from the bike budget. The funding is from the PF&R Park Development capital budget andhas been ear-marked for this project for some time.
I know this seems like a lot of griping in one post, but, I was definitely not the only cyclist feeling let down following Monday’s meeting.

The path itself is nice. Nice for pedestrians and dogs at least. What made me sick is the way they’re spinning this….implying that this will somehow be part of the bike network in the city. It doesn’t make any sense at all. There is only one path, and it will be full of joggers, dogs, dog-walkers, kids, seniors, etc… Riding a bike on this path will actually be dangerous, unless you’re going really slow.

It blows my mind that the city could be so adamant about bikes on sidewalks being dangerous and putting thousands of stickers on every ring+post saying “don’t ride on the sidewalk” and now they’re trying to sell this new sidewalk as a bike route? And encouraging us to ride on it?

It’s a beautiful path, and nice park, but this is not cycling infrastructure and we can’t let any politician, journalist or city staff pretend otherwise.

I had to bite my tongue last night. It’s kinda like a consolation prize. Cyclists get another swift kick in the ass which comes with a side order of play-handling and spin. I think we should name the train tracks bridge at Dupont ‘Galen Kuellmer Memorial Crossing’.

Galen Kuellmer was run over and killed in May 2004 while riding his bicycle on Dupont near Dundas. Dave Nosella at PF&R says, “We’ll take this suggestion under serious consideration, review internally and let you know. I think there is opportunity for a memorial of some kind, not sure of what form it could take.”

Photo courtesy of bikelanediary.blogspot.com as part of City of Bicycles photography show during Bike Week last year. The photo is of the Wallace street bridge which currently goes over the WTR site. Meeting photo by Dougal Bichan. WTR map from NOW.