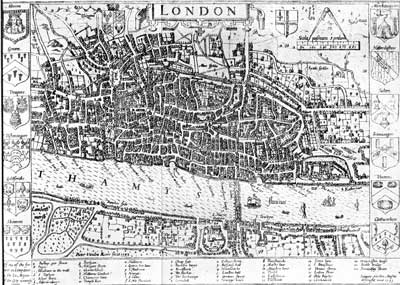 I recently read an article by the English historian Paul Slack about perceptions of London, England in the seventeenth century. During this century, the city grew from 5% to over 10% of England’s population — over half a million people — becoming the largest in western Europe.

The article opens with two quotes that use anatomical metaphors to describe this growing metropolis. They neatly summarize the two contrasting attitudes towards the dominant city of the kingdom.

Great towns in the body of the state are like the spleen … in the body natural: the monstrous growth of which impoverisheth all the members, by drawing to it all the animal and vital spirits, which should give nourishment unto them. (Peter Heylyn, 1652)

The metropolis is the heart of a nation, through which the trade and commodities of it circulate, like the blood through the heart, which by its motion giveth life and growth to the rest of the body; and if that declines, or be obstructed in its growth, the whole body falls into consumption. (Nicholas Barbon, 1685)

I had a “the more things change, the more they remain the same” feeling when I read these quotes. These basic attitudes — that the metropolis sucks up money, energy and talent from the rest of the nation, or, by contrast, that the metropolis is the engine of the national economy — are still common attitudes expressed about big cities, including Toronto in relation to Ontario or Canada as a whole.

It’s particularly relevant to me after reading Alan Broadbent’s insight in Urban Nation that in the last two decades, the Greater Toronto Area’s growth has accelerated while that of Canada’s medium-sized cities has largely stagnated. Toronto is becoming the metropolis of Canada in a much more pronounced way than used to be the case. The GTA already includes more than 10% of Canada’s population, similar to London’s position in England in 1700.

This position translates into a similar set of contrasting attitudes, in the way that people outside the city seem to agree on hating and resenting the city, and equally in the way Torontonians complain that they play a vital role the nation’s economy but get no respect for it. In the rest of the article, Slack explores other seventeenth-century attitudes to the metropolis that also resonate in modern opinions — that London is dirty and polluted, a place of excessive luxury and consumption, a breeding ground of vice, or, by contrast, that London is the epicentre of culture, vitality and innovation.

As Toronto becomes more of a metropolis, these contrasting attitudes seem to be becoming stronger and translating into politics. The contrast between Toronto’s provincial and federal politics, which are now completely dominated by centrist and left parties, and that of rural areas, which are increasingly dominated by conservative parties, has become stronger and stronger over the last 20 years, and now appears set in stone (with smaller cities and suburbs serving as the swing vote).

I also hear echoes of these contrasting attitudes to the metropolis among people I know who have moved to Toronto. Some love being in the big city, while others have had to come here because it’s where the opportunities are, but don’t really enjoy it — its pollution, its crowdedness, its lack of nature — and long for smaller cities or the country. It’s by no means a result of narrow-mindedness — I have one friend who moved here a couple of years ago after living in a largely rural area, who has made strong and sincere efforts to come to terms with the city, exploring all of its ravines and other natural areas and delving into its character and history. But he simply does not feel at home, and plans to move back to a smaller town soon.

No doubt some of this is based on the environment we grew up in — I have lived in city centres since I was four years old — but I think some of it must be based on personal factors. For example, I don’t like driving, and I seem to have a stronger negative physical reaction to molds and pollens than I do to smog. So it makes sense that I like living in the city (I certainly enjoy spending time in the country too, I find it beautiful and refreshing, I just can’t imagine living there for long).

I am curious about how our readers, especially those who have moved here from elsewhere, feel about the metropolis. I’m not interested in a political discussion about the benefits of cities — as you can see from the quotes above, it’s been going on for hundreds, perhaps thousands, of years — but rather in the range of personal feelings about the metropolis. How did you feel about Toronto before coming here? Did you share some of the negative or positive attitudes noted above? How do you feel about living in a big city now that you are here?