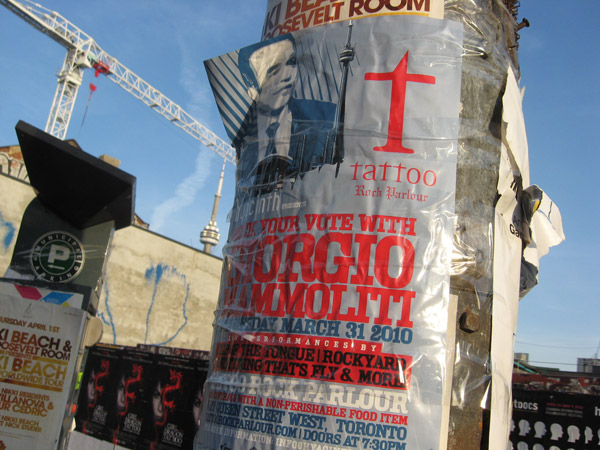 “Fascist” is not a word I throw around lightly. But it does tend to be the best one to describe Giorgio Mammoliti’s brand of big-government conservatism, which involves arming the state to crack down on citizen expression. He loves billboards and hates posters and graffiti.

Parts of our city look atrocious because of all the graffiti and signs, he told the Toronto Sun on Sunday. Ours is becoming a city filled with illegal posters….We have to expand the number of enforcement officers and give them some teeth.

He suggested the penalty should be as high as $5000 per infraction because “people will stop painting graffiti or putting up posters if the fine is high enough. Both “young offenders” and their parents should be subject to community service, and fines should also be exacted from the “shows or events being listed on the illegal signs.” 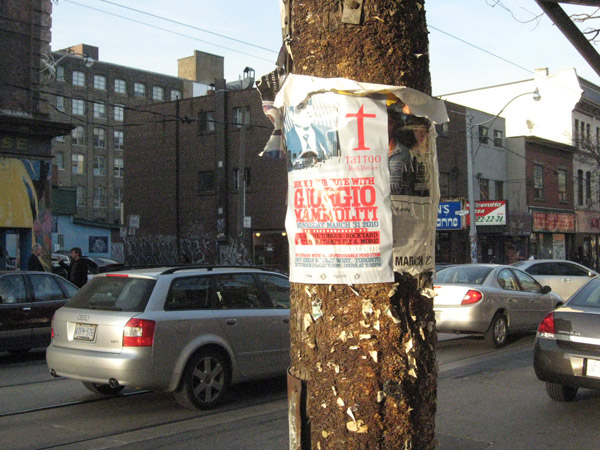 On Wednesday, March 31, Mammoliti held his ill-starred, infamous Rock Your Vote fundraiser at Tattoo Rock Parlour (567 Queen West, just east of Portland). A few days before, I had been tipped off to these posters for the event, and I finally got around to photographing them on the afternoon of April 1st. All five that I found were on the south side of Queen between Spadina and Bathurst, in the vicinity of Tattoo Rock (though my radius of exploration didn’t extend far beyond that area). 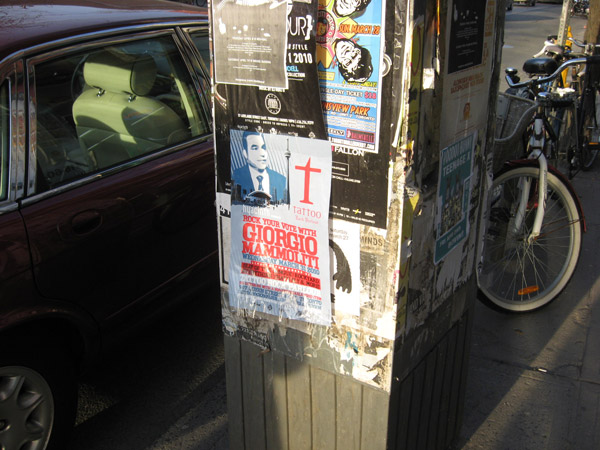 Under the circa-1997 postering bylaw adopted by the former City of Toronto, all of these posters would be legal, except for the one on the mail box. In the summer of 2006, however, the Council of the amalgamated city adopted, with amendments, a new harmonized postering bylaw [PDF] that has still yet to be enacted due to Astral Media’s foot-dragging on the installation of postering kiosks.

Under the new bylaw, all or some of Mammoliti’s posters would be illegal for the following reasons: 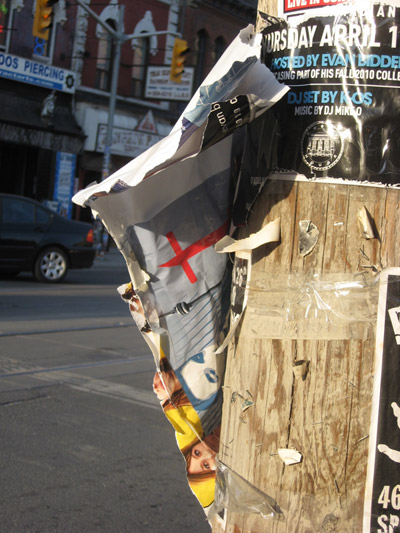 These are arguably ridiculous restrictions, and so general enforcement of the new bylaw will be unlikely rather, and perhaps more problematically, action will probably be taken on the basis of complaints, leading to some posters and messages being dealt with more harshly than others. The fine for each poster found to be in noncompliance will be $60. 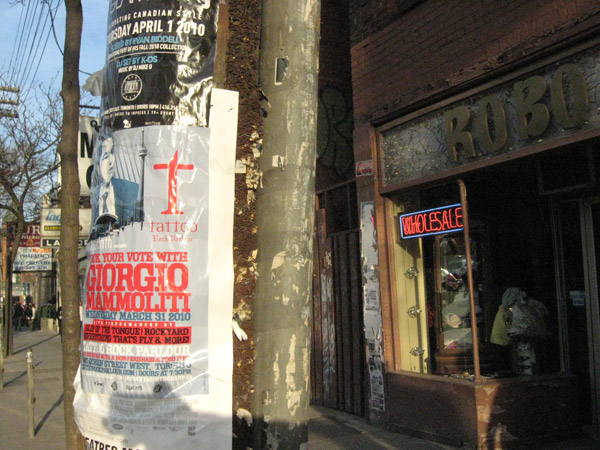 “We need to get tougher with people who do the little things as well,” Mammoliti told Matt Galloway on Monday morning. “You put up a poster in this city our city is full of illegal posters, everywhere, and we don’t have the mechanisms to be able to deal with it. Enforcement officers should be able to get out there and fine people that put up illicit posters.”

Jonathan Goldsbie became involved with the Toronto Public Space Committee (and municipal politics more generally) during the debate over the bylaw that would have banned public postering.