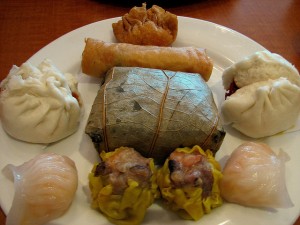 With so much of Midnight at the Dragon Café taking place in the kitchen and around the tables of the Chou family’s restaurant, it’s hard to read Bates’s debut novel without getting hungry. Su-Jen’s mother, desperately homesick for Hong Kong, throws herself into cooking, the preparation of elaborate means  “the only thing that [gives] her real pleasure” in Canada.

While the family dines on such mouthwatering dishes as “sliced white chicken, beef hot-pot with dried bean curd…plump glistening scallops fried with greens and mushrooms, a whole fish steamed with ginger and scallions,” their restaurant serves mostly greasy spoon favourites, and what the family jokingly refer to as “fool the lo-fon food”; American Chinese food preferred by the white residents of Irvine, Ontario.

The difference between the two definitions of Chinese food is marked: even after years of living above the restaurant, Su-Jen finds chicken balls foreign, and remarks that she’s never seen anyone in her family eat an egg roll. While the family eats well at home, with favourite dishes seeming to carry hidden messages across the formica table, their most sumptuous meals take place around the white-clothed tables of dim sum restaurants on weekend visits to Toronto. Here her parents, who speak little English and rarely get the chance to leave their restaurant, can wander freely in the shops, buying their favourite products from home and chatting easily with the other customers. But after years of English schooling in Irvine, Su-Jen finds Toronto’s Chinatown overwhelming, and is eager to get away: “the clanging from the streetcar, from people’s voices, from the heavy traffic, relentless and inescapable…it jarred my senses.”

In an article in Gastronomica, “Roadtrip to Chinatown: Tasting Your Heritage, One Bite at a Time,” Eve M. Tai recalls how she and her siblings were regularly forced to make a five-drive drive to Toronto in order to “eat at as many Chinese restaurants as possible within forty-eight hours.” As a child Tai, like Su-Jen, felt uncomfortable in Chinatowns, “a world away from our suburban house in Detroit with its clipped and coddled lawn, living room furniture from New Englander, and cars tucked tidily in a double garage.” Never the less, Tai’s parents who, like Su-Jen’s, were some of the few in their extended family to escape China after the Second World War, drag their children to Canada often: “Toronto. The very word sinks my already moody adolescent constitution. Not again!” Up and down Spadina, Tai’s family not only travels in search of delicious meals, but also packaged and dried foods to take home with them: “Toronto is for the serious foodie. Toronto is the epicenter. If you can’t be in China, you can be in Toronto on Yonge Street with its double-parked cars, shouting vendors, and streams of pedestrians.”

Both Eve M. Tai and Su-Jen Chou talk of Toronto’s Chinatown as we understand it now, with the Dragon City Mall looming at the epicenter, barbequed duck hanging in the windows on bustling Spadina next to markets with overflowing, stacked crates of produce. By the time Su-Jen arrives in 1957, her aunt and uncle own a house on D’Arcy Street and eat at restaurants on Chestnut Street, and a few years later her brother’s somber, awkward wedding ceremony takes place at the likely familiar Chinese Presbytryian church at 177 Beverly. But until the 1950s, Toronto’s Chinese community was centred further east, along Queen around what is now Nathan Phillips Square. After approval of the new City Hall in 1947, many shops and restaurants owned by Chinese-Canadians were expropriated, and the community moved north and west. A brief history of old Chinatown, along with some very cool photographs of early Elizabeth Street buildings, is available through the City archives here.

The comfort of food “just like at home” is not limited to new immigrants, and this tension between parents longing for the old world and children much more comfortable in the new is not distinct to either Torontonians or Chinese immigrants. Food, so often entwined with memories of childhood, family, and history, is always emotional. This is true for no one more than Su-Jen, whose dark family secrets seem to work their way in to the dumplings, fried noodles, and soups her mother and brother prepare across from each other in the Dragon Café kitchen.

Foodies, history buffs, and readers should be sure to stop by the Pape/Danforth branch of the TPL this Wednesday, where Arlene Chan will be presenting “From Chop Suey to Peking Duck: The Evolution of Chinese Food in Toronto.” There will be samples! More information is available here.