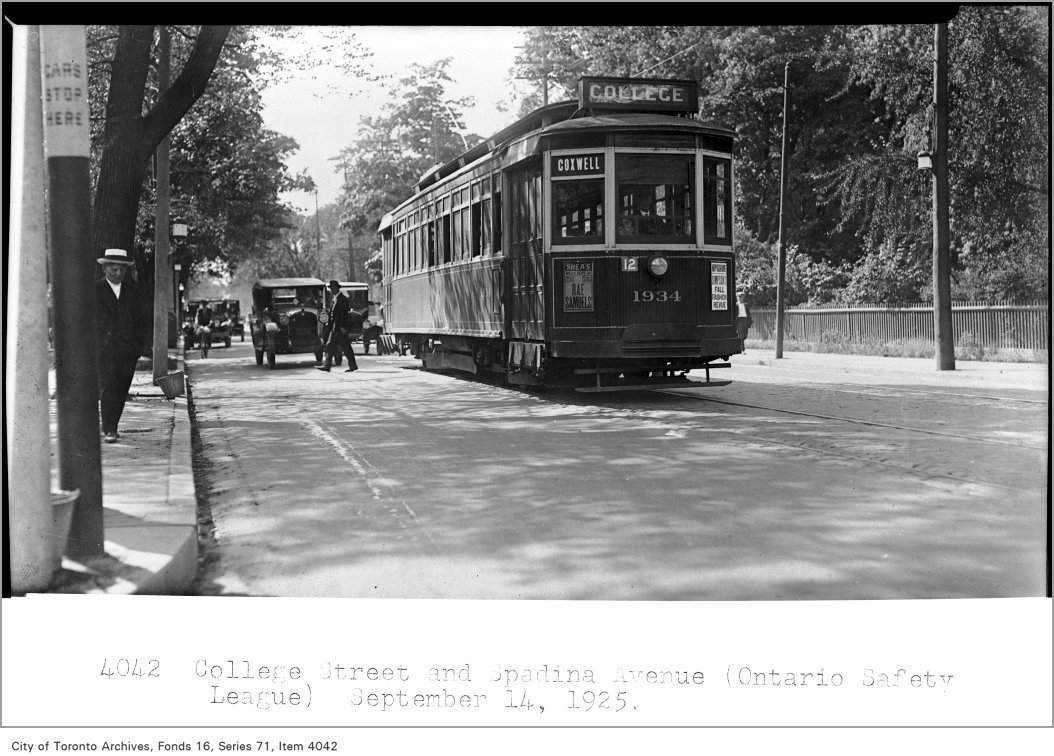 TTC car stop, College Street and Spadina (from the City of Toronto Archives)

Quick. What’s red and white and found all over Toronto?

It’s Canada Day, so perhaps our national flag, introduced in 1965, comes immediately to mind. But the lowly TTC streetcar/bus stop sign, the simplest and cheapest piece of transit infrastructure, is about as common — and has had the same colour scheme since 1933, 32 years before our flag. Yet despite its humble nature, the TTC stop sign has a surprisingly interesting history.

The first streetcar stops were marked, usually at street corners, between 1891 and 1921. These were the early days of the electric Toronto Railway Company, the principal transit company (three other companies operated streetcars on the fringes of Toronto’s city limits until the creation of the public TTC in 1921) .

Previously, horse-powered cars could be boarded anywhere, so stop signs were not required, but faster electric vehicles necessitated defined stops. In Toronto, the first car stops were long bands of white paint on adjacent metal or wooden poles with the text “CARS STOP HERE” (see above).

In the 1930s, the TTC adopted a new standard for car and bus stops by adding red bands above and below the white paint to add visibility to the signs. The red colour suited several purposes: it was close to the TTC’s own maroon paint; and the red indicated “stop” and increased the stops’ visibility to motormen (operating faster cars), passengers, and motorists — who then, as now, were required to stop when streetcar doors are open. Eventually, the text was simplified to vertical black lettering reading “CAR STOP” or “BUS STOP”, and remained the standard sign used across Toronto (and along TTC routes outside the city) for three decades. Until the 1950s, when the TTC expanded service into the suburbs, street-side poles were plentiful and close to the curb; stand-alone poles, common today, were unusual. 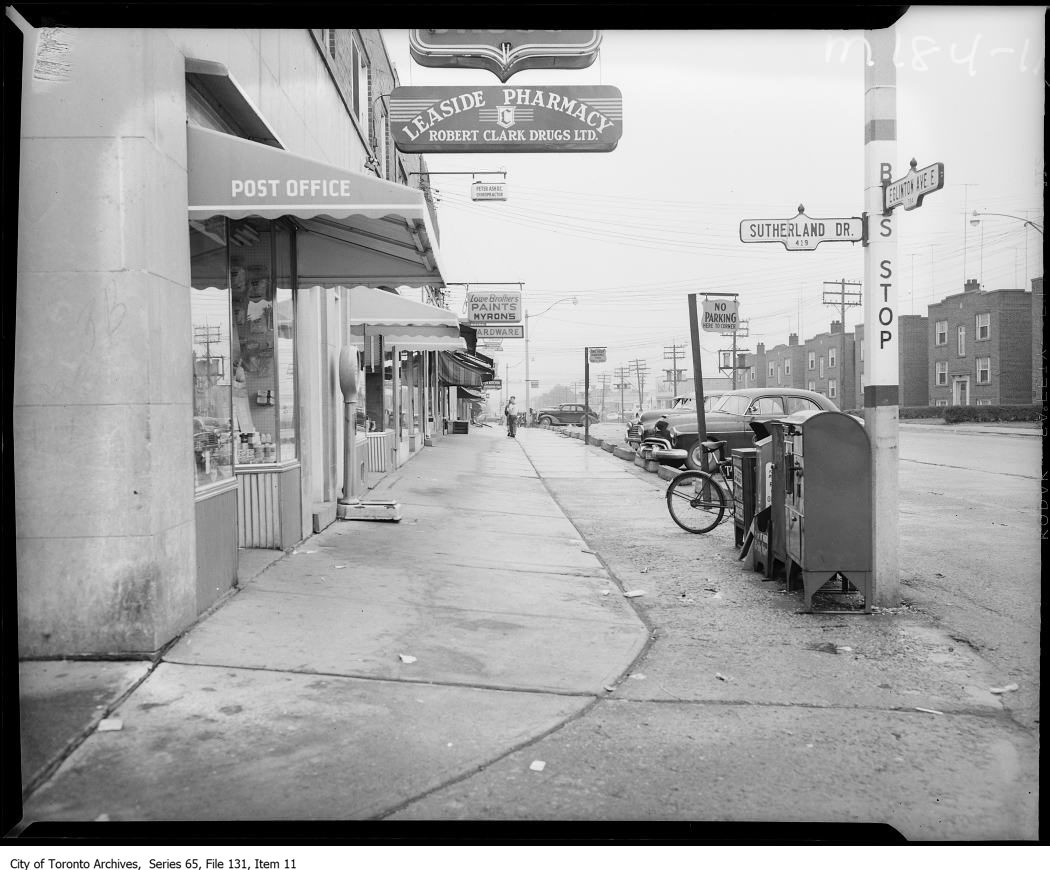 The best-preserved example of a second-generation painted TTC bus stop is not in Toronto, but on Ann Street in Port Credit. It’s a remnant of the old 74 Port Credit bus, which ran from 1935 to 1976 between Long Branch loop and the old town that is now part of the City of Mississauga. The most-intact second-generation bus stop sign I’ve seen, on Ann Street in Port Credit. The red and white paint is very much visible, and some of the old vertical ‘BUS STOP’ text is barely legible. Click the image for a closer view.

New third-generation signs, introduced in the 1950s, were a response to the TTC’s expansion of service into the suburbs. Utility poles were not as convenient; if they were present, they were not necessarily along the streetside, but set back from the road. The solution was a stand-alone signpost, a green-painted stake with the familiar painted white-and-red sign at the top. Later, by the late 1960s, a separate plastic surface was used for the sign’s white background and red tape at the top and bottom, with black sticky lettering. By the 1970s, the common “CAR STOP” or “BUS STOP” text was replaced by icons of the front of a PCC streetcar or a GM “New Look” bus, giving the signs a simple, clean look. Paint was abandoned for good, with vinyl boards now affixed to both sides of a utility pole, often on top of the faded paint.

But the simple red-and-white look didn’t last forever. Blue bands were added in 1987 when the old night bus system was revamped, implemented city-wide, and given unique 300-series numbers as part of the newly branded “Blue Night Network.” These new blue bands represent night service, and replaced wordy night bus signs such as the one remaining at Dufferin and Bloor. Yellow stickers attached to the white sign came about to indicate times when no service was provided (which made a big comeback with the recent service cuts). More information on the stops was added with the then-innovative Timeline telephone scheduling service numbers, and with the introduction of low-floor accessible routes, blue universal wheelchair accessible logos were added. More stickers were added when Timeline was discontinued in 1999; “Request Stop” or “Streetcar Safety” decals conveniently covered the Timeline information. So while the form remains, the simplicity is lost.

Today, there are still two types of TTC bus/streetcar stop signs, which are now in their fourth generation; standalone and utility pole–mounted. They are made in-house at the TTC’s shops. New signs are shorter than those made in the 1960s through the 1980s, and they are no longer made with stand-alone wooden poles. Sunday stops, unique to Toronto, are one of those things this city never got around to removing (sort of like the street railway system, threatened with abandonment only after most North American cities already dismantled their networks). Sunday stops are mostly found in the Old City of Toronto, more often than not on streetcar routes. They were originally provided for churchgoers, dressed in their Sunday best. Today the Sunday stops are little more than an anachronism of the old “Toronto the Good” era, yet they persist. Sunday stops were painted yellow to distinguish them from full service stops. Thanks to the message archives in the Transit-Toronto mailing group, I found out how TTC stops are produced. Unlike many other systems, which use metal signage for bus stops and use modern in-house design shops or outside contractors, modern TTC signs are still are made on-site using basic plumbing and print shop materials.  For stand-alone stops, white (or in the odd case, yellow for Sunday routes) heavy-duty plastic pipes are used as the base. Red and/or blue Scotchlite bands and the various decals are added at the TTC’s shops, affixed to four-foot-high metal poles and then bolted to a concrete base where needed. The flat utility-pole signs are made from vinyl boards similar to that of house siding. All these supplies are available at your local hardware and printing stores. Now that you know, you can make your very own authentic TTC stop! A modern pipe TTC stop, with the generic bus logo, at Dundas and Aukland Road near Kipling Station. Next to it is one of the brand new Miway (the re-branded Mississauga Transit) stops, one of the most elegant and distinctive in Ontario.

Acknowledgements: Thanks to James Bow, Steve Munro and Pete Coulman for their assistance in completing this post.