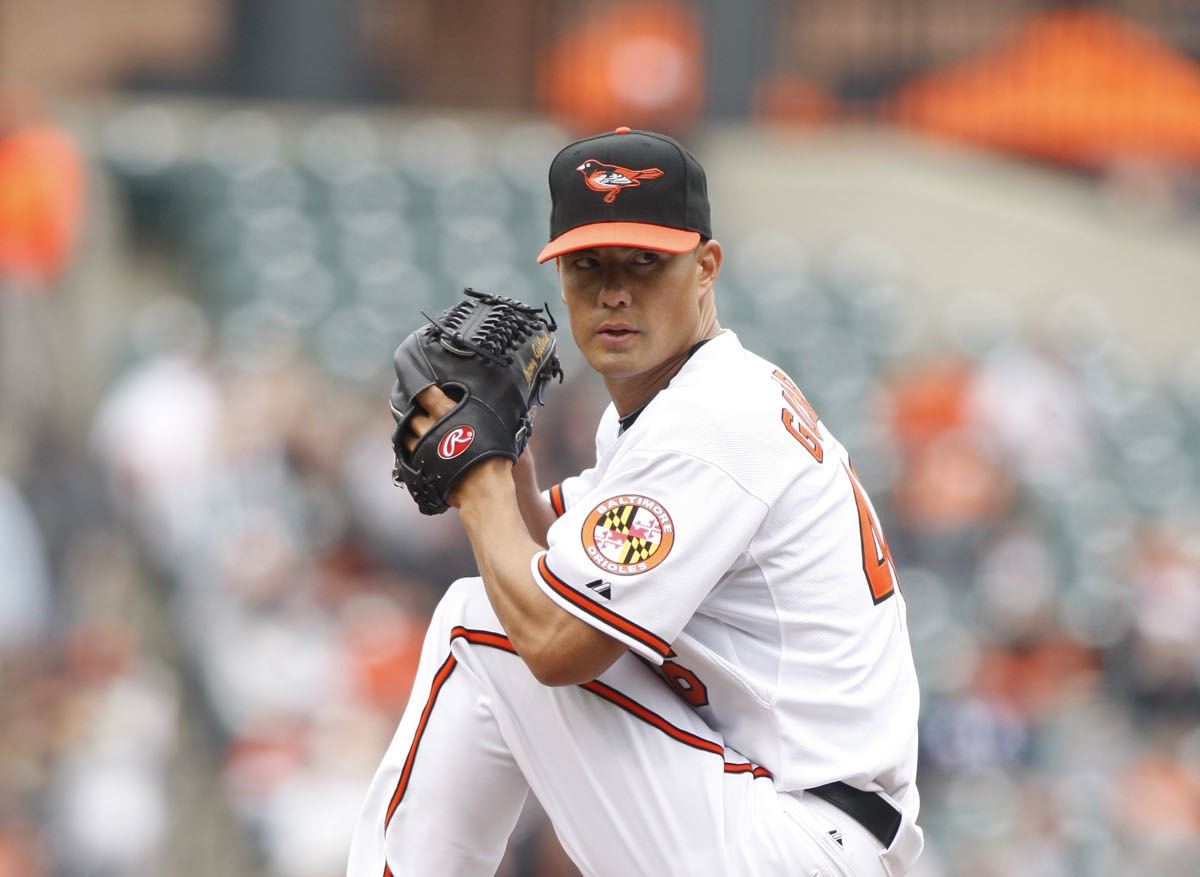 Jeremy Guthrie is a pitcher for Major League Baseball’s Baltimore Orioles. An avid urban cyclist, Jeremy is a mainstay on Baltimore’s busy streets. On July 27th, the Orioles played the Blue Jays in Toronto, providing Jeremy an opportunity to cycle through T.O.’s streets. Spacing caught up with him at the Rogers Centre and discussed his thoughts on cycling, the city, and what inspires him to bike everywhere.

Spacing: You went bike riding around Toronto today.  What did you think of the city?

Guthrie: Toronto is my favourite city that we travel to. It’s open, has great weather most of time and there are a lot of cyclists on the road so I never feel alone. It feels like you have partners watching your back: When I was riding, I saw one cyclist helping out another cyclist who got clipped by a taxi. That’s great. I also love seeing different parts of Toronto like Yorkville and Queen Street. This city has a lot to offer.

Spacing: Where did you go on your bike ride?

Guthrie: I went east on Queen Street trying to make it out to Woodbine Beach but I didn’t quite get there. I got pretty far out but eventually had to turn back. Then I went up to Yorkville.

Guthrie: I’ve been here 20 times or so. I’ve done a lot of exploring. I used to take the subway to get everywhere and now that Toronto has Bixi, I just bike.

Spacing: What did you think of Bixi?

Guthrie: It’s great! The first time I saw anything like it was in Paris. I think it’s perfect for a commuter city and I’d love to see more cities have them. The bike is very heavy, very durable, and rides really well. Three gears is perfect. Whenever I needed to go fast, I could definitely turn it on and get going. I would even take advantage of the little basket in front with the bungee chord. It seems like it would be safe at night too with all the built-in lights.

Spacing: How does Toronto compare to Baltimore in terms of cycling friendliness?

Guthrie: I think Toronto is more cycle-friendly. Baltimore is a little bit congested inside the city and there are not a ton of bike lanes. They’re trying to do better by building lanes because commuter cycling is growing in Baltimore. Toronto has a better set-up and I think it’s a safer scenario for cyclists.

Spacing: Have you cycled in many other Major League Baseball cities?

Guthrie: I’ve biked a bit in New York City. New York can be a little bit rough and you really have to be aware of what’s going on around you. There aren’t as many cyclists in New York either. Another problem is that cyclists seem to defer to drivers instead of the other way around. As a cyclist, you have to be overly defensive to make sure you’re safe.

Spacing: Do you think drivers defer to cyclists in Toronto?

Guthrie: I found that to be more the case. There are certainly some that don’t but overall I think you’re going to find more defer here than in other cities.

Spacing: So, is your bike your main mode of transportation all the time?

Guthrie: It is during the baseball season when I’m in Baltimore. I live about three miles from the ballpark and get to the field about five days out of the week on a bike. During the winter when I’m in Utah, my bike is my main mode for the first month or so, then weather turns cold and snowy.

Spacing: What kind of bike do you ride?

Guthrie: I ride a Cannondale. I also have a Gary Fisher back home in Utah. I’ve ridden BMX bikes, Haro’s, etc…I would ride anything. If its got two wheels, I’ll ride it.

Spacing: How did you get into cycling?

Guthrie: When I was young that’s how I got around. I would ride miles to get to the baseball game, to the mall, to the baseball card shop. If I needed to go somewhere within reason, I would ride my bike. I got used to freedoms of riding a bicycle. It starts with doing it and enjoying it. The more you ride the more you enjoy it and the better you feel physically. Then you start to gain an appreciation for all that biking offers. As you get older you understand the environmental benefits and why it’s important to avoid driving as much as you can.

Spacing: I heard you convinced some of your teammates to commute by bike. How did you do that?

Guthrie: They saw that gas prices were going up and were able to see a certain advantage to cycling. But it also made sense because so many of the Oriole players live downtown and it’s a short ride. They saw the traffic after work and how long it took to drive four miles home after the game. It can take you 30 minutes by car. I think some of the practical reasons drew them into it. They have fun with it as well. This year, there are as many as nine or ten different guys riding their bike to the field.

Spacing: What do you do when you travel to different cities for road games and you want to go cycling?

Guthrie: Toronto, New York and Boston are the only cities where I’ve had an opportunity to cycle. I’ve borrowed bikes, but I usually wind up walking or taking transit to get to the field or places I want to see in other cities. In the future, my goal is to get a coupler bike. It comes apart in two pieces and allows you to travel with your bike more easily. It’s becoming more and more popular from what I’ve seen within the cycling community. It’s a pretty large financial investment but I think it would be worthwhile if I want to ride in more cities.

Spacing: Do you have a goal to cycle in all 30 Major League cities?

Guthrie: It’s not a goal but I would like to. I’d love to ride anywhere I can.