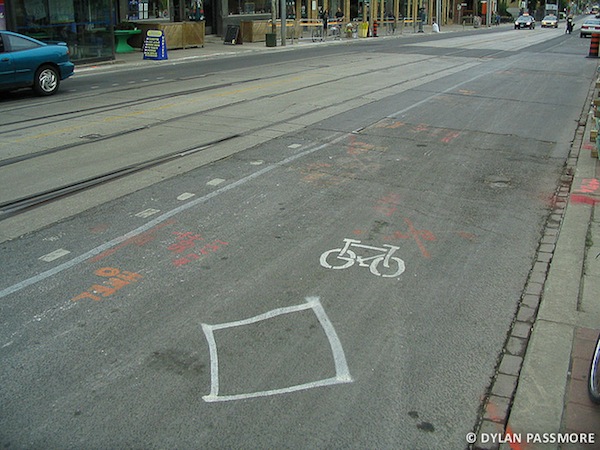 Installing a bike lane takes money, but uninstalling it can take even more. And sometimes, as with the case of the removal of the Jarvis bike lane, a lot more.

The Toronto Cyclists Union, through a request to City transportation staff, has obtained numbers related to the cost of implementing the Jarvis bike lane versus returning the street to its former state. They noted that the installation of the bike lanes cost the City a total of $86,000, with $21,000 for removal of overhead wiring and signal hardware, and $65,000 for the lane markings. The reinstallation of the overhead wiring and signal hardware for the bi-directional fifth lane is pegged at approximately $200,000, while the lane markings will cost approximately $72,000. This adds up to a total cost of $272,000.

Originally, the City had estimated the cost at only $200,000; the Toronto Cyclists Union says that the “increased cost is due to the installation of new overhead wiring hardware to comply with current electrical safety standards.”

These costs stem from a decision back in July 2011 when City Council voted, without public consultation of any kind, to pull the plug on the bike lanes on Jarvis Street and return the road to its former state as four lanes plus a bi-directional centre lane. This, despite a report from city staff [PDF] detailing minimal increases in travel time on Jarvis post-bike lane installation.

But, alas, no amount of sane reporting from city staff could stem the desire of Rob Ford to see the Jarvis bike lane perish. And so it was to be.

So, at a time when City Council is mired in debates over which social programs and grants to cut, at a time when we’re all but drowning in a sea of wasteful spending rhetoric, the City will be spending more than a quarter of a million dollars to reverse a bike lane that works for cyclists and drivers. Andrea Garcia, Director of Advocacy for the Toronto Cyclists Union, referred to the reinstallation of the bi-directional fifth lane on Jarvis as Ford’s “gravy lane”.

There are a thousand things plus one that this money could go towards right now, but instead we are going to spend $272,000 to make this city just a little bit less safe.