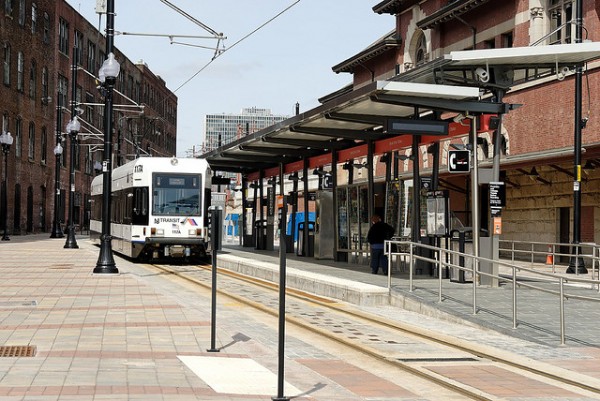 In the wake of city council’s decision to continue to build-out Toronto’s LRT plans — and since Mayor Rob Ford continues to mistakenly call any LRT project a streetcar line — Spacing will profile a handful of LRT projects from around the world that will give readers a little better understanding of this transit option.

The State of New Jersey is a busy place.  While it lacks a top-tier city of its own (that role being taken by New York in the north and Philadelphia in the South), the state is filled with smaller cities and towns and dense suburbs — in fact, the average density of the entire state is 20% higher than that of Peel or York, two large regions to the west and north of Toronto, and far greater than densities in Halton or Durham in the eastern GTA.

While the state boasts an impressive commuter rail network that is more than double the size of GO Transit, this system, along with two bi-state subway lines, is geared almost entirely to getting commuters into New York and Philly.  This had left a gap in more localized rail transit to serve north-south traffic along the cities on the Jersey side of the river opposite both the Big Apple and the City of Brotherly Love.  Newark, the Hamilton to New York’s Toronto, had a small streetcar line of its own that, having been lost in a time-warp, was long in the tooth and in need of upgrading.

To improve rail transit across the state in these areas where it was neither physically or fiscally appropriate to build new commuter trains or subways, New Jersey turned to LRT.  Three modern systems were opened in 2000 and 2006 that covered a variety of configurations, demonstrating the flexibility and adaptability of this mode of transit across urban, suburban, and even intercity districts.

Historically, the rail lines in the northern part of the state ran east-west, ending in piers for transfers to ferries over to New York, or after 1910, in the tunnel to Penn Station.  The rail lines and their yards dominated the landscape, leaving few road connections between towns in Hudson County.  In 2000, the Hudson Bergen Light Rail  system began service to better tie together this waterfront region, and today it runs from North Bergen through Hoboken and Jersey City into Bayonne, carrying 41,000 riders per day (about the same as Toronto’s St. Clair route). The vehicles are modern Light Rail Vehicles, 90 ft long and can hold up to 190 passengers [PDF]. Fare payment is off-vehicle.

The route encompasses the gamut of LRT possibilities.  One segment runs in a long tunnel, while another segment is completely elevated above traffic on a viaduct.  The remainder of the system is at grade, but this is divided into sections that switch rapidly back and forth between railroad-like corridors off the street, dedicated lanes in streets, and mixed traffic just like a true urban streetcar.  Station spacing varies accordingly.

When riding the trains one cannot help but notice these different alignments and see them as a product of the flexibility of LRT.  Despite the different site-specific conditions along a sinuous route, a unifying steel ribbon was created as cost-efficiently as possible using whatever land was available from each set of municipalities and landowners.

The old “Newark City Subway” used a downtown tunnel as a trunk line for streetcar service that emerged onto the surface to serve the inner suburbs.  This was very similar to the evolution of streetcar lines in Boston, Philadelphia, Rochester, and San Francisco.

In 2001, the venerable PCC cars were finally upgraded with the same Light Rail Vehicles  and fare system used on the HBLRT, and the lines were soon extended both farther out to the suburbs and, as a development tool, along one of the main downtown streets (Broad Street).  The system today carries 18,800 passengers per day.

As it exists now, the two-line system runs in a mix of tunnel, off-street railroad-like tracks and on-street right-of-ways.  As with the HBLRT, the flexibility of LRT has been used to adapt to the existing conditions, making the ride something of a train-tram hybrid experience.

A century of declining railroads and industry also left poor north-south connections on the NJ side of the Delaware River between the small state capitol city of Trenton and Camden, the “Windsor” of Philadelphia.  Applying the multiple capabilities of modern LRT, a 55 km route was installed in 2004 to act as a high-speed intercity rail connection between these cities and also serve as an urban-friendly streetcar on city streets within them.  Service is every 15 minutes during peak hours and every 30 minutes at other times, again with off-vehicle fare payment.

Given the enormous length of the route, and the fact that most of it would lie along a disused railroad, the unusual choice of diesel-powered LRT was selected.  Similar to the O-Train in Ottawa, this LRV requires no poles or wires since all electricity is generated by a diesel unit on-board.

At 9,000 riders per day, the RiverLINE is a small LRT system despite its length, but it again demonstrates the flexibility of LRT to shape itself for city, suburb and beyond.

As it pertains to the GTA, the state of New Jersey offers a number of interesting LRT case studies.  The Hudson Bergen LRT is, in places, not unlike a converted Scarborough RT or the surface sections of proposed LRTs along Eglinton, Sheppard or Finch.  The Eglinton tunnel will be but a modern version of a century old concept, similar to the upgraded Newark City Subway.  Should future LRT be desired along more inter-regional routes, the RiverLINE provides for a viable way to expand rail service where full GO trains cannot be justified.   And all three systems have urban segments that show how to upgrade Toronto’s legacy streetcar routes for bigger vehicles, faster boarding, more decorative pavements and better operations even within traditional streetcar configurations.

All reality show stereotypes aside, Torontonians studying LRT have much to learn from Jersey’s shores.