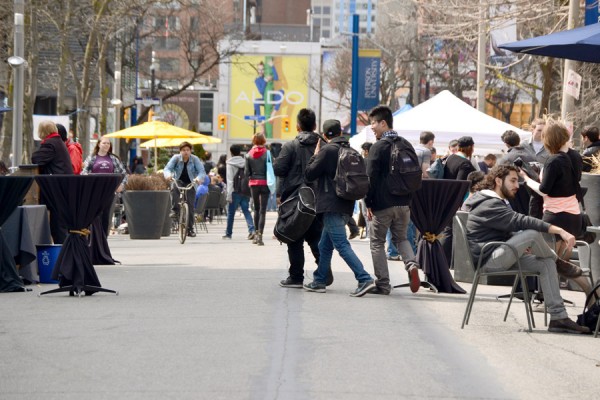 Ryerson University community members and city staff took to the streets this past Wednesday — or more specifically, to Gould Street — to celebrate its official closure to cars and the creation of a permanent pedestrian zone.

The pedestrian area, now named Ryerson Square, runs along Gould, which is the main throughfare of Ryerson’s campus. It extends from O’Keefe Lane to Bond Street, and also included a portion of Victoria Street (Google Maps has already updated the street to show its new designation). This space experiences an abundance of foot traffic (Ryerson has more than 35,000 full and part-time student), features a weekly summer farmers’ market, and a number of chairs and patio tables.

The campaign for Gould’s closure has long been a vocal project of the Ryerson Students’ Union (RSU). After years of campaigning, a one-year pilot program was approved in 2010, which was later extended by six months. On February 6, 2012, Toronto City Council voted to permanently close the streets — as well as parts of Willcocks Street at the University of Toronto — to car traffic, with a new term for the agreement every five years.

But despite this victory, the calls for improved zones for foot traffic continue.

But Diverlus stated that changes won’t be happening over night. “We acknowledge that to close a street is a logistical nightmare, especially a street north of Dundas,” he said. “But we still have perseverance.”

Councillor Kristyn Wong-Tam, who represents the ward containing Ryerson, also attended the rally. She called Ryerson a significant city-builder in the downtown community, and joined calls for the extension of the pedestrian zone to intersect with Yonge Street.

“Having people come and experience this street [Gould] is important,” she said. “They’ve actually been able to determine that closing down a street or widening a sidewalk is not going to end the world, and the city will continue to operate. And we see that the businesses on Yonge Street are supportive of having more pedestrian activity. I think that this will just be a natural extension of what can happen to Yonge Street.”