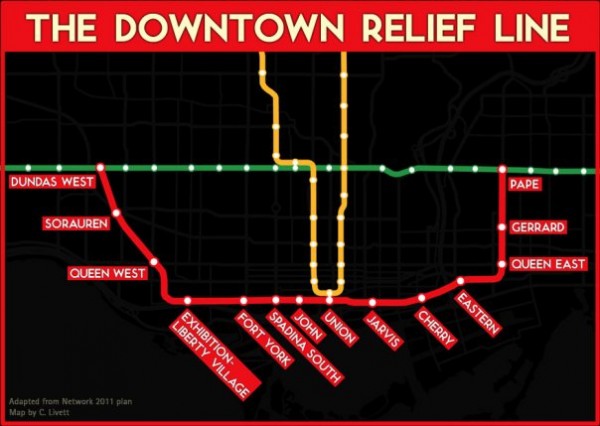 Since the Sheppard East subway line idea has been nixed (for now), attention has turned to where the next — and most logical — subway line should be built. While extending the current subway lines by a station or two seems appropriate (such as taking the Bloor line west to Sherway Gardens or the Yonge line north Steeles), the densely populated areas in most need for subway expansion are east and west of the Yonge-University lines. Transit advocates refer to this future route as the Downtown Relief Line.

The DRL has many believers, including TTC Chair Karen Stintz, transit planners at Metrolinx, and close to 2,000 rail fans on Facebook. The Toronto Star had an article today outlining the benefits of the DRL including a few ideas about its potential alignment. Both Eric Miller, the chair of the Sheppard East expert panel, and Spacing columnist Steve Munro suggest that the DRL is not just about downtown and has many benefits for suburban transit riders. Miller said that the line could eventually expand out into Scarborough and Etobicoke to become the transit backbone of those communities, while Munro noted that Flemingdon Park and Thorncliffe Park are prime candidates of where the line could start in the east.

But in hyper-sensitive Toronto, using the word “downtown” in a future subway line’s name — so soon after Scarborough residents felt they were giving the shaft by councillors (many from downtown) who favour the more affordable LRT technology — has it’s drawbacks.

So, in the spirit of not adding fuel to any urban-suburban feud that may or may not exist, Spacing is challenging readers to come up with a list of better names that “Downtown Relief Line.”