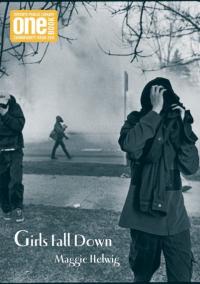 In Girls Fall Down, “bodies in space” is one of the main character’s frequent refrains. As a medical photographer, Alex is often charged with documenting horrific injuries. “Just bodies in space,” he reminds himself.

What kinds of bodies are allowed in which spaces is a central theme of Girls Fall Down. Last Thursday, author Maggie Helwig was joined by Anglican Archbishop Colin Johnson to discuss the politics of bodies in the novel, and beyond, in a talk entitled “Occupying the Page: Literature, Public Space, and Social Justice.” The discussion, held at Toronto Public Library’s Beaches branch, is part of the Keep Toronto Reading Festival.

When the novel opens, Alex has seen a girl collapse on the Yonge subway, vomiting, claiming she’s been poisoned. While most of the passengers on the train look the other way, Alex steps forward, curious. The train empties out, the hazmat squad is called, suspicion and fear spread through the city. Soon other girls are falling down, claiming they have been poisoned, rashes on their faces. Subways are suddenly too public, a dangerous meeting place. Masks are worn, and no one will look each other in the eye.

In Thursday night’s discussion, the panicked, cloistering divisiveness in Girls Fall Down was contrasted with the Occupy movement’s use of space. Helwig and Johnson both drew links between the characters’ restless searching and the development of an alternative community outside St. James Cathedral last fall. Here was a space where some of the city’s most vulnerable populations came together to model an alternative form of decisions making, a different mode of sharing space. Helwig and Johnson spoke of the promise of such modeling, and drew links between it and the hopeful imagination necessary in a writer: Girls Fall Down offers, as all novels should, a space to consider a different way of being.

When we meet Alex, he seems to be everywhere without actually occupying anywhere. As a hobbyist urban photographer, he slip effortlessly between public and private spaces, wandering through Parkdale as the sun sets, hanging out in the Path system after the shops have closed,  then heading home to his darkroom to develop far into the night. Alex strikes us, first and foremost, as an observer of bodies moving through space, although he is himself in constant motion.

As a diabetic, Alex requires regime. He is all too aware of what it means to feel the body’s functions seize up, and must monitor his blood sugar carefully. This is something he finds almost impossible to do once Susie-Paul comes back into his life on the same day the first girl falls. The complicated relationship between Alex and Susie is, in a very literal sense, an exploration of the threats and possibilities of bodies in space together. The messy, paper covered floors, the vomit, a contaminated body, the fear of being violated: after Susie’s return this scene repeats for Alex, and to us, in a tent on a hillside under the Don Valley, in a space that has become too private.

CBC’s Nil Koksal will moderate a panel entitled “One Book: Toronto’s Invisible Community” on April 19. Check out all One Book events, including a live chat with author Maggie Helwig, a graffii tour, a ravine walk, and lectures on subterranean Toronto and post-9/11 anxiety here.