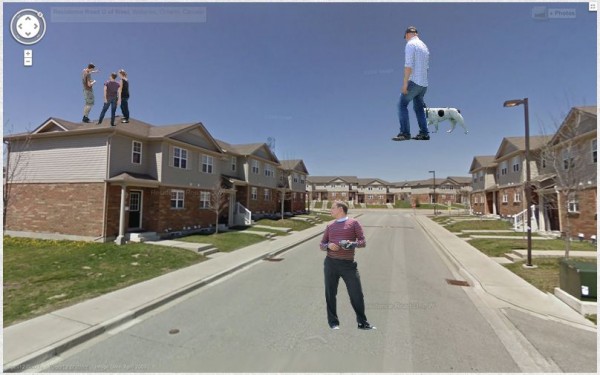 A couple of months ago, I posted about the habit of architecture firms randomly Photoshopping people into their designs, without necessarily any relation to how the design was likely to be used.

Now anyone can have fun adding people randomly to street images, without even needing Photoshop, thanks to a thesis project by Scott Kobewka, a recent University of Waterloo graduate. His “Department of Civic Images” project includes a tool to add people randomly to a couple of Kitchener-Waterloo streetscapes, with the potential to make it much more far-ranging.

The feature is part of a larger project with a variety of other tools, including a collage tool. Explains Kobewka,

My goal here was to create a web app that would allow people to design street-scapes based on the elements that were provided for them. I had in mind that this tool could be used in public consultation to generate interest in a project and get people thinking about new ways that a street could be used. In this sense, the tool is meant to generate a discussion about a space.

Once it was designed, though, I realized that if I could take the visualizations that are often presented to the public and make them interactive, it would be easier for people to understand the reasoning behind some of the design choices. So in this sense, the tool could be used as a platform for educating people about a new development.

My own experience tells me this could indeed be a valuable tool. In a lot of urban projects, local residents will have a good idea of what is needed, and being able to sketch it out clearly can provide useful guidance to the designers in creating a final project that responds to local needs.