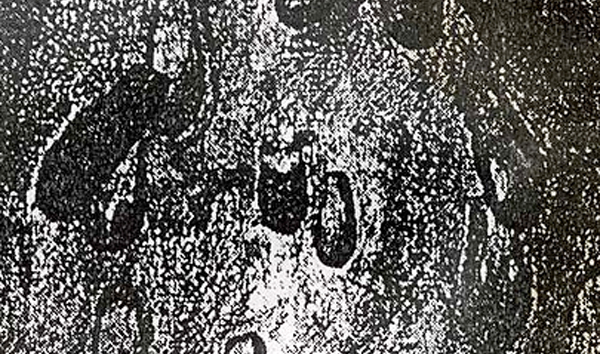 During the last ice age, a really, really, really, really big glacier covered pretty much all of Canada and the northern United States, including the Toronto area. When the ice age ended, about 12,500 years ago, the ice sheet gradually melted, receding north until it became nothing more than the remnants that are still hanging out around Baffin Island today.

In our neck of the woods, the water that melted off the glacier formed a giant lake called Lake Iroquois. It filled the basin where Lake Ontario is now all the way up to Davenport Road. The big hill running along the north side of the street is the shoreline of the ancient lake.

Now, the reason Lake Iroquois was so big was that for a while the St. Lawrence River was still blocked by the retreating glacier. The water flowing out of the lake had to go south instead, down the Mohawk River, eventually hooking up with the Hudson before flowing out into the ocean. So when the ice dam blocking the St. Lawrence finally broke, much of the water in Lake Iroquois suddenly rushed out, and what was left was a lake that was way smaller than Lake Ontario. Science-y folks call it Lake Admiralty, and its shoreline was five kilometers south of where our waterfront is now.

That meant that about 11,000 years ago the entire Toronto area was a vast plain of tundra and spruce forest. With the glacier gone, animals moved in. There were mammoths and mastodons, ancient caribou, musk ox and bison, bears and wolves. And with them came the Paleoamericans, who are believed to be the very first humans to ever set foot on this land. They were nomadic hunters with stoned-tipped spears and small settlements throughout the region.

At one point, it seems a family of them walked north up from Lake Admiralty toward what’s now downtown Toronto. They were wearing moccasins, and for at least a few steps, they walked through clay, leaving their footprints behind.

Over the next few thousand years, Lake Admiralty gradually grew, filling with water until it became the Lake Ontario we know today. And those 100 footprints, frozen in that clay, were hidden from view. That is, at least, until 1908 when workers installing a waterpipe on the lake bed just east of Hanlan’s Point discovered them.

It was easily one of the most spectacular archeological finds in Toronto’s history, probably the earliest evidence of humans living here. “It looked like a trail,” a city inspector told the Toronto Evening Telegram. “You could follow one man the whole way. Some footprints were on top of the others, partly obliterating them. There were footprints of all sizes, and a single print of a child’s foot…”

But the city was in a rush. They wanted to build a tunnel and they didn’t want to slow down. So they just poured concrete over the prints and kept going.