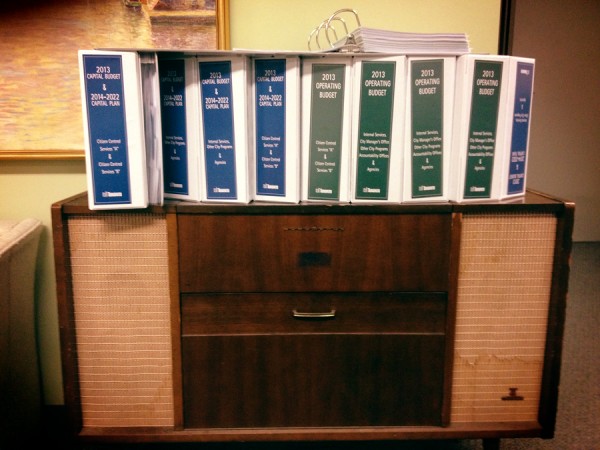 I’ve been a business reporter longer than I’ve covered politics, and I can say without fear of contradiction that the City of Toronto’s budget documents — which are squarely in the public eye as the annual spending fight commences — are the most impenetrable financial reports I’ve ever had the pleasure of decoding.

Each year about this time, they land with a (real or virtual) thud in the press gallery, the second floor of City Hall, and online, providing a textbook example of how some organizations use information to obscure, rather than enhance, understanding.

As council begins its annual budget consultations today, I’d argue that these voluminous, impenetrable doorstops, more than any other single factor, serve to prevent effective public engagement in the critical process of figuring out how the City should spend the funds entrusted to it by the residents of the city.

Over the years, 2012 being no exception, critics have bemoaned the lack of an effective budget consultation process. We talk endlessly about better online engagement (e.g. Naheed Nenshi), and approaches that are not designed to weed out all but the most determined or bloody-minded deputants. The participatory budget processes used by a few Latin American municipalities are cited as inclusive models to emulate, yet the comparisons to our own system are at best far-fetched.

Despite the hand-wringing, the City and Council makes no systematic attempt to present the information in an accessible format that allows residents to respond to the data, and, most importantly, understand it in a meaningful context. Instead, the city does its annual data dump, featuring reams of partially undigested numbers and perplexing calculations that smother careful consideration. The budget reports may be public documents, but they are most assuredly not public-spirited.

For the Toronto communications staffers who may be listening on the line, I should say here that I’m NOT advocating snazzier print and virtual PR materials, like the little charts that go into the tax bills. Rather, I’d like to see the entire thing scrapped and re-imagined, using the sorts of novel data visualization techniques that are radically re-shaping the way some organizations connect with audiences.

Great examples abound, and here are some of the better ones: RSA’s use of white board animation in “knowledge visualization”; and the amazing “data journalism” on news sites like The Guardian or the New York Times’ Fivethirtyeight blog. Ian Chalmers, of Pivot Design Group, says a growing number of consulting firms now specialize in helping organizations present data in highly imaginative ways, such as Visual.ly, Infostethics and Fathom. London has its own “Data Store.”

There are lots of people in the corporate world who get this point, by the way. The Canadian Institute for Chartered Accountants (CICA) hands out annual awards for excellence in financial disclosure and reporting, lauding companies like Potash Corp. for the clarity with which they connect with their investors and other stakeholders. (Disclosure: I write for CA Magazine, which is published by the CICA.)

A municipality, of course, has very different goals than a publicly traded company. But they both have a vested interest in effectively communicating financial information to their respective audiences. Indeed, there’s a growing body of academic literature showing that clear financial reporting is connected to share performance. Put simply, the better the disclosure, the happier the investors.

This topic came up at last week’s lively #topoliWTF event, at the Tranzac Club. One participant wondered why, for example, we can’t look to the budget documents to find out the per capita spending on libraries. Excellent question.

Unlike many annual reports, the city’s budget documents also suffer from chronic amnesia. Case in point: not only would it be useful to know the per capita spend on libraries; it would be helpful for citizens to see how that ratio changes over time, whether or not it is linked to changes in traffic in the libraries, and how the ratio of library users to the general population evolves from year to year.

If voters could see that per capita spending was growing faster than actual usage, they might interpret that data point as a warning sign of mismanagement. But if they noticed that increases in library traffic had exceeded the budgetary allocation per resident, they might say to councillors that more investment is needed.

Here’s another example of unhelpful budget information: inevitably, the city each year trots out a bar graph showing what a typical homeowner pays for various services. But wait! This is for someone who owns a nearly half million-dollar home. Last I checked, about 50% of the city’s residents are tenants, so this break down is literally meaningless because they never see a property tax bill. Imagine if a firm like Bombardier only sent investor packages to half its shareholders. They’d sell, fast.

There are surely thousands of ideas for recasting and improving the annual budget numbers in ways that provide greater analytical clarity for ordinary people.

So how to get from dark to light? Obviously, it’s not an overnight fix.

My suggestion: council should pass a motion establishing a working group of councillors, city staff, and citizens to begin a consultation on what sorts of information should be in the budget, in what form the data can be better presented, and some overarching principles on how the city should be presenting information.

Armed with that kind of framework, the city should then issue an RFP asking data visualization companies to propose solutions that incorporate the ideas collected through the consultation. Lastly, get it done by the next term of council. (By the way, the expenditure belongs in the capital budget column because the investment can be amortized over many years.)

Why spend money on something like this when there are roads to fix and child care workers to pay? For similar reasons that public companies invest in their annual reports: if shareholders have a clearer sense of what firms are doing, they’re better positioned to make good investment decisions.

As we embark on yet another parade of three-minute pleas that mostly fall on deaf ears, it’s hard to imagine why anyone could be satisfied with the status quo.