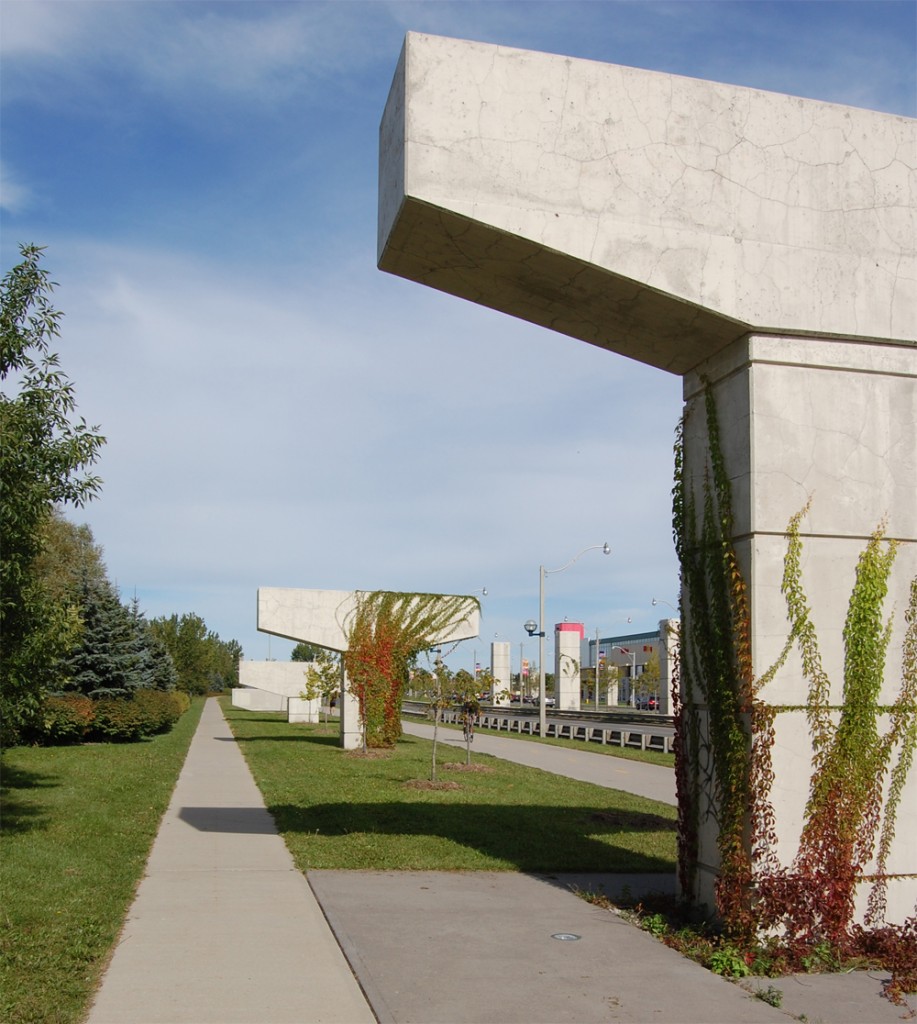 Hands up everyone who loves Lakeshore Boulevard east of the Don, where the Gardiner stub once stood, a monument to an earlier generation’s failed plans.

More than a decade after Jack Layton, then a local politician, convinced council to spend $39 million to demolish the orphaned offspring of the Scarborough Expressway, Lakeshore remains a soulless suburban arterial, adrift in the alien world of an otherwise urban downtown. Like any big old road you’d find in the 905, it is forbiddingly wide, perfunctorily landscaped and discouraging to street life.

Yes, the Martin Goodman trail runs along the south side, as it did before the demolition. But there’s zero evidence of urbanization along that stretch. It’s a bowling alley of large footprint parcels with low-slung big boxes set waaaay back.

Even if the city persuades landowners to intensify and create pedestrian-oriented development, those buildings will gaze out onto eight lanes of high-speed traffic. I’d go so far as to predict it will take generations before it becomes a place you’d want to linger.

Lakeshore East, in other words, stands as a cautionary tale for residents and planners who want the city to resume the environmental assessment on the Gardiner’s future, with an eye to removing some or all of the road Fred built.

I have no objection to the city re-starting the EA. But I remain deeply skeptical about whether even a flush and highly motivated council would succeed at replacing the Gardiner with the sort of edifying, urban-minded vision outlined in this here on Spacing before the holidays by renowned planner Ken Greenberg.

It seems to me that the debate about the Gardiner’s future, or lack thereof, pivots on two key issues: (i) Will whatever succeeds it actually represent a meaningful improvement to the public realm along the waterfront? (ii) Could re-igniting the tug-of-war over this highway negatively impact arguably more important city-building debates, namely future transit financing and development?

First, a bit of history: Some local urbanists have been dreaming about removing the Gardiner for a long time, invoking various schemes, including tunnels in the lake. The latest institutionalized push traces to Robert Fung’s 1999 waterfront revitalization strategy, which addressed itself to the possibility that the city would win the 2008 summer Olympics and thus needed to a more presentable waterfront.

Fung’s vision, taken up by planning consultants and city officials, involved partially burying the Gardiner from the CNE eastwards. But the cure, in that case, was much worse than the disease, as early technical work-ups revealed that the tunnel entrance/exits would consume huge amounts of space. What’s more, the multi-billion-dollar plan (no reliable estimates were ever developed) depended on the construction of the Front Street Extension – a prohibitively expensive mini-highway running through Liberty Village and on towards Bathurst.

The city, of course, lost the bid to Beijing, thus removing an important deadline. In the aftermath, architects Calvin Brooks and John van Nostrand pitched an imaginative alternative – shifting Lakeshore out from beneath the Gardiner and allowing new uses (small warehouses, covered public spaces, etc.) to develop under the highway. Their argument: that the real impediment to an improved public realm is the Lakeshore, not the elevated highway. By urbanizing the former and making innovative aesthetic improvements to the Gardiner’s supporting structures, you create a more forgiving pedestrian experience south of the tracks.

After the 2003 election, David Miller also began advocating a third solution: a partial demolition from Jarvis to the Don. Miller and others noted that dismantling the Gardiner west of Jarvis would cost billions yet make little difference aesthetically, as the highway abutted by the back-sides of a row of condo towers.

What’s more, they noted, the section between Jarvis and the Don is the least used portion – most people heading into the core peel off the Don Valley Parkway at Richmond, or exit the Gardiner at Spadina or York – and expendable if the road capacity can be replaced with an at-grade boulevard.

In 2008, when Waterfront Toronto and Toronto council voted to support an EA on removing the eastern portion, possibly with an eye to transforming Lakeshore into an eight-lane road. The estimated project cost: $300 million, a number that almost certainly underestimates the actual expense (e.g., associated changes in the off-ramps further west to accommodate heavily traffic volumes).

Throughout this whole melodrama, however, electoral politics and development have continued to close off possibilities, and there’s little reason to believe that this dynamic will change, even in the face of a $700 million repair bill.

By failing to control development on strategic land south of the highway, the city essentially doomed the Brooks/Van Nostrand plan, the most urban-minded of all the solutions presented to date. And as we now know, Waterfront Toronto hit the pause button on the EA in anticipation of the last election.

Comparing what exists today to the political and physical landscape circa 1999, it’s very important to make one obvious but often over-looked observation: the highway has done nothing to constrain investment. Much of “South Town” has risen in the past decade and a half. Both residential and office developers have had no trouble selling or leasing space that literally overlooks the highway. So the old assertion – that removing the Gardiner is a necessary pre-condition to unlocking development in the area – has been proven wrong.

While the condo market has slowed due to changes in federal mortgage rules, there’s little reason to conclude that the land use economics east of Jarvis are any different than what has prevailed between Yonge and Bathurst/Fort York Boulevard since the city launched the redevelopment of the railway lands in the late 1980s.

Next, from an urban design perspective, advocates of a Gardiner removal must seriously address the precedent of Lakeshore Blvd. East, and the possibility that what replaces the Gardiner may well never become a viable urban boulevard, such as University Avenue.

It will be forever squished up against the railway embankment, meaning it is fated to be a one-sided affair, with all the implications for street life. Moreover, engineering standards that the city cannot change will determine lane widths and other technical design elements. Lastly, given council’s political and regulatory constraints, I don’t see how the city green lights a plan to build a narrower replacement road. Arguably, that’s what we should do. What council is capable of doing is another matter entirely, given the Gardiner’s intimate relationship to the commuting habits of suburban drivers and downtown reverse commuters.

Which brings me to the final question, which is the cost of removing the Gardiner viz maintaining it. The city spends billions repairing municipal infrastructure – that’s what it does on an ongoing and mostly uncontroversial basis. The Gardiner repair is expensive, but plans to remove and replace it will be as well. And that funding will be politically divisive, pitting suburbs against the downtown.

From where I sit, council in the next few years desperately needs to hammer out a consensus for investing billions on much needed transit enhancements in both the downtown and the suburbs. This will be a highly contentious debate about the future of the city’s transportation network and infrastructure. Against that backdrop, the proposal to demolish the Gardiner – an essentially local improvement with some region-wide implications — becomes a highly distracting flashpoint that may drain council’s ability to press ahead with controversial financing solutions.

At this stage, the Gardiner teardown seems like a solution in search of a problem. South Town, amazingly, is absorbing this nasty old road. That’s not a cause for despair; rather, it says something intriguing about Toronto’s success as a city.