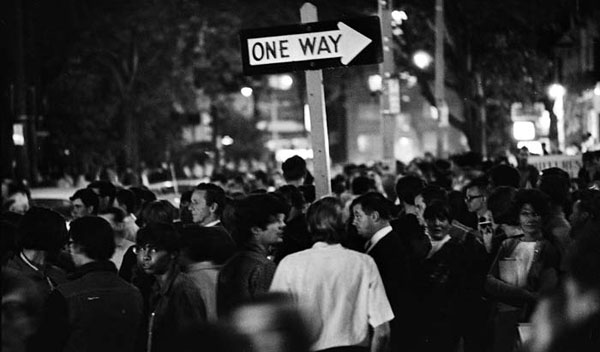 It’s the summer of 1967. The Summer of Love. Hippie culture is at its height and Yorkville has become one of the biggest hubs for sex, drugs and rock ‘n’ roll on the continent. Just ten years ago, the first Beatnik coffee shops opened in what was then a quiet, residential neighbourhood – full of rundown Victorian homes, a few art galleries and upscale boutiques. Now, the coffee houses are everywhere, more opening and closing all the time – patios out front; poetry, folk music, go-go dancers, and rock ‘n’ roll inside. The Penny Farthing even has a pool on its roof. Streets like Cumberland and Yorkville, Hazelton and Scollard overflow with hippies, greasers, and bikers.

It all just keeps getting bigger and busier. Long-haired kids from all over Canada are hitchhiking across the country, thumbs pointed squarely at those few blocks north of Bloor between Bay and Avenue Road – those same few blocks that have already been home to countless artists and musicians over the last ten years: folk singers like Joni Mitchell and Gordon Lightfoot; poets like Margaret Atwood, Dennis Lee, Milton Acorn and Gwendolyn Macewen; rock stars like Neil Young and The Band, the beginnings of Steppenwolf and Buffalo Springfield and Blood, Sweat and Tears. Heck, even Rick James.

It’s not just Canadian kids. Americans have been flocking to Yorkville, too. Some of them come for the scene — for the drugs and music and art and free love — and some for the chance to escape the Draft and the war in Vietnam.

William Gibson came for both reasons. He’d grown up in rural Virginia reading science fiction and the Beats — Ginsberg and Kerouac, but especially William S. Burroughs. One day, they would help influence him to become one of the most celebrated science fiction authors of all-time. But first, they helped influence him to drop out of high school. And with the Draft in full swing, he figured it might be a good idea to convince the authorities that he wasn’t really cut out for a stint in the Armed Forces.

“I told them that my one ambition in life was to take every mind-altering substance that existed on the face of the planet,” he remembered later. “I just went in and babbled about wanting to be like William Burroughs. And that seemed to do the trick… I went home and bought a bus ticket to Toronto. But I don’t like to take too much credit for that having been a political act… It had much more to do with my wanting to be with hippie girls and have lots of hashish than it did with my sympathy for the plight of the North Vietnamese people under U.S. imperialism – much more to do with hippie girls and hashish.”

Yorkville had lots of both.

Gibson plunged right in, smoking pot and hash, dropping acid and doing pretty much everything else he could get his hands on. He knew better than to do heroin – thanks to reading Burroughs – but other than that: “The opiates aside, I tried whatever was going. I sort of prided myself on it.”

He wasn’t alone. That very summer, just a couple of blocks away at the University of Toronto, Yorkville’s hippies organized something of a multimedia conference on the benefits of dropping acid. “Perception ’67” they called it. Allen Ginsberg came. (He even had breakfast with Marshall McLuhan.) So did one of the Merry Pranksters. Timothy Leary would have been there too, but the government wouldn’t let him into the country. And as amazing as the popularity of LSD was, it was nothing compared to pot. Yorkville was awash in marijuana smoke.

Money, on the other hand, was a bit harder to find. There were thousands of kids in the village that summer, especially on the weekends when “weekenders” flooded in from suburbs like Forest Hill. But there were only so many jobs and places to crash. “For a couple of weeks I was essentially homeless,” Gibson later told the BBC, “although it was such a delightful, floating, pleasant period that it now seems strange to me to think that I was in fact homeless.”

Luckily for him, at least one young entrepreneur saw the popularity of drugs in Yorkville as a new kind of business opportunity. The world’s first head shop had opened in San Francisco the year before, followed by one in New York City a few months later. Now, Toronto had a head shop of our own — with an incredibly nerdy name to go along with it: Gandalf’s. The store sold pipes and bongs and rolling papers and all sorts of other drug-related paraphernalia. The CBC called it, “A dope fiend’s idea of a dream come true.” And it seems that at the same time Gibson was looking for a way to pay rent, Gandalf’s was looking for a manager. He got the job. That’s how he bankrolled a summer spent living, as he puts it, “in various wonderful sorts of sin”.

Of course, all this drug-use and sex and long hair attracted plenty of media attention. The newspapers and television crews had been fascinated by Yorkville since the early ’60s — spending most of their time freaking out over the supposed corruption of youth, but also trying to figure out exactly what all these kids thought they were doing. And so, in September of 1967, the CBC sent a crew into the neighbourhood to interview some hippies.

By an awesome stroke of historical luck, they happened to find William Gibson.

The video of their news report is posted online in the CBC archives. (You can watch it here.) Gibson — in the slow, lazy voice of someone who seems to be very stoned — rambles on about hippie philosophy, free love and the counterculture while he wanders around the neighbourhood. The CBC’s narrator, Knowlton Nash, holds him up as a prime example: “a real hippie”.

But in truth, by then, Gibson was sick of the whole scene. And with the summer winding down, he was just looking to get enough cash together to be able to move on. He says when the CBC showed up offering $500 for an interview, he was happy to lie through his teeth. “[N]othing I’m saying there, at such painful length, is even remotely genuine,” he wrote a few years ago. “I’m thoroughly fed up… and want nothing more than a ticket out.”

He got it. For the next few years, he’d move around – even go to Woodstock – before returning to Toronto for a while. It was here that he met and married his wife, but they eventually settled in Vancouver. That’s where he went to university, got into punk, and started writing the science fiction that would make him famous. They say that not only did he coin the term “cyberspace”, but that it’s because of him we talk about stuff like “surfing” the web and “neural implants” too. His 1984 novel, Neuromancer, is still a mainstay of first year syllabuses. In 1999, the Guardian called him “probably the most important novelist of the past two decades”.

By the time he left Yorkville, the scene had already peaked. As bikers and harder drugs became bigger problems and a few cases of hepatitis sparked a media frenzy, the authorities – who had long been calling the scene a “cancer” and “a festering sore in the middle of the city” – seized their opportunity to drive the kids out of the village. The counterculture spread across downtown Toronto, to Kensington Market and Queen West and just down Bloor Street to Rochdale College (until the government shut that down too). Meanwhile, Yorkville was turned into the swanky shopping district it is today. When Gibson came back for a visit last year, the Globe and Mail was there. “It’s as though they tore down St. Mark’s Place and built the Trump Tower,” he told them. “My Bohemia is gone.”