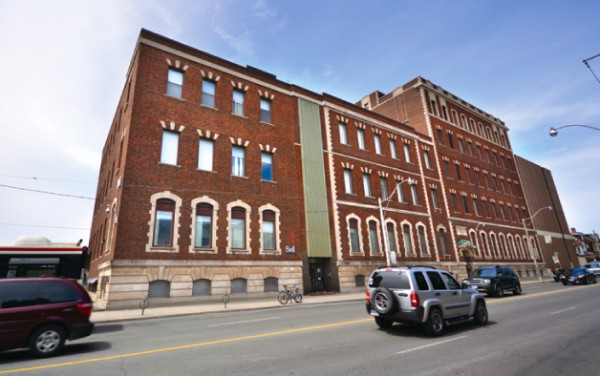 If you’ve ever walked, biked, or otherwise commuted past the monolithic Bell Canada building north of Dufferin subway station, chances are you’ve wondered what goes on behind those never-open six-foot windows. The building is mysterious: its four storeys with 20-foot ceilings dominate the landscape offering little at street level. It is anti-social to the extreme.

The value of 1030/1040 Dufferin Street lies within. This central office, built for Bell Telephone Company of Canada in 1919, is one of the company’s oldest in Toronto. It’s one of 25 central offices in the 416 area, and serves as a technical and training facility for Bell’s service technicians in Ontario.

The nondescript addition on the north end of the building was erected in the 1950s. Inside, the flow between buildings is seamless.

The northern portion houses the technological infrastructure — the nuts and bolts of modern (and not-so-modern) telecommunications. Most of this section houses rows of metal scaffolding for landline telephones that service thousands of individual connections — this would be hundreds of kilometres of copper cable if strung from end-to-end. If something goes wrong with your landline in the 416, this is likely where the problem can be traced to.

What 1030/1040 Dufferin lacks in neighbourhood charm, it makes up for in utility. But in a neighbourhood characterized by libraries, public schools, residential houses, and small shops, this drab industrial space sticks out like an odd duck.

— by Andrew Reeves, originally published in the summer 2012 issue of Spacing