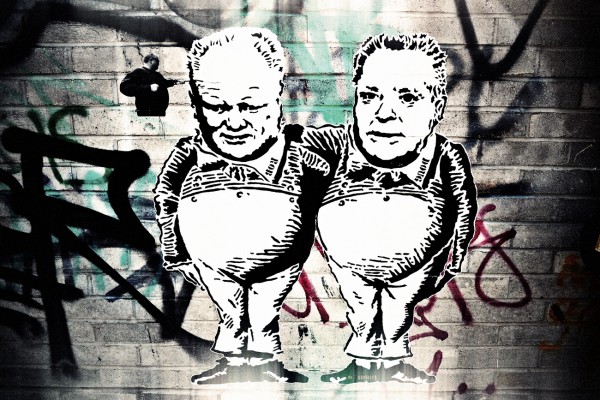 For two-and-a-half years, Doug Ford’s gladiatorial approach to municipal governance has been as unchanging as that vacant Etobicoke field his brother Rob likes to call “Woodbine Live!”.

The rookie councillor routinely calls out his City Council counterparts when he feels they are shirking their duties. Last week, he excoriated Councillor Jaye Robinson (who was bedridden with a chest infection at the time) for missing a Civic Appointments Committee meeting. Ford decried her supposed shiftlessness and claimed that her absence caused the meeting’s cancellation (which, as it happens, was an outright lie — the meeting proceeded as scheduled, with Ford himself in attendance).

The week before that, on the CFRB radio show he co-hosts with the mayor, Ford chided the 18 Toronto councillors who attended the recent FCM annual conference in Vancouver for not doing their jobs. Later on in the show, he backed away from the prospect of not doing his job by running in a Provincial election, and announced that he will instead focus on not doing his job by continuing to act as the mayor’s self-appointed Polonius. He’s turned his attention to “the job at hand with Rob into the next election.” But giving his brother a hand with his job is not the job Ford was handed.

To clarify, Ford is the city councillor for Ward 2, Etobicoke-North. That’s his job. Yes, he is a member of various committees and he has a responsibility to them, but his primary responsibility is to the constituency that elected him. Ford’s track record, however, suggests he has barely a nodding acquaintance with Ward 2 and its numberless needs.

Nearly 25% of Ward 2 residents live in poverty [PDF], and transit options are limited throughout the ward. A 2008 study conducted by PollutionWatch, which shows a positive correlation between poor air quality and poverty, indicates that air pollution levels in some sections of Ward 2 are amongst the highest in Toronto. The southeast corner of Ward 2 falls within Weston-Mt. Dennis, one of 13 priority areas in Toronto identified by the City as requiring considerable attention due to inadequate community services and high rates of poverty, crime, and unemployment. This, clearly, is a ward that needs an engaged and informed city councillor.

Unfortunately, Ford is neither of those things. His web site, for example, is bereft of substance: links to Twitter, Facebook, email, and RSS that lead nowhere, a ward profile with three bullet-point factoids and nine more dead links, and a homepage that refers to only two ward-specific events — one that took place two weeks ago, and another that happened last summer (although both are advertised as upcoming).

It’s possible that Ford has heard some distant rumour of the problems that plague his ward, but he appears to have done nothing substantial to fix them — no transit initiatives, no environmental initiatives, no housing initiatives.

Instead, he has put forward motions like EY21.48, wherein he motioned that a condo developer be permitted to erect three times as many A-frame advertising signs as the Municipal Code permits; EY19.40, wherein he motioned that certain properties at risk of violating driveway-widening regulations be granted an extension to the one-year extension they’d already been granted to comply with the regulations; MM7.7, with which he sought to provide the Toronto Catholic District School Board with $75,000 to build a change room; and EY11.17, with which he sought to block a pedestrian walkway with a 1.8-metre chain-link fence, as requested by a number of residents.

True, EY21.48, EY19.40, MM7.7, and EY11.17 were successful. But they constitute the most significant initiatives Ford has realized in Ward 2 to date, and only the last two have provided his constituents with any appreciable benefits (benefits slightly offset by the fact that EY21.48 is a demonstrable impediment to Ward 2’s perambulatory population, such as it is).

And when Ford is not not helping his constituents (which, at least, means he’s not actively undermining them), he’s working to their detriment. When, for example, City Council considered allocating $407,840 to 11 not-for-profit organizations looking to improve their services in priority areas — including Weston-Mt. Dennis — Ford was one of only three Council members to vote against the idea. When City Council considered implementing a program designed to steer gang-involved youths away from crime and into the labour market, Ford was one of only six Council members to vote in favour of debarring individuals who had been convicted of gun-related crimes from participating in the program (because the best way to improve the lives of marginalized, violence-prone youths is to push them from the margins right off the page).

Maybe Ford chooses to serve his constituency with old-fashioned retail politics — answering phone calls and replying to emails and rescuing cats stuck in trees — and maybe that explains the distressingly small number of on-the-record Ward 2 initiatives he’s pursued (although Ford certainly didn’t return our phone calls or reply to our email requests for comment, nor would the office assistant we spoke to tell us how much time Ford spends responding to his constituents’ concerns).

A more likely explanation is that Ford’s political persona precludes him from doing his job (which, incidentally, would make his stentorian accusations of slothfulness on the part of other councillors a kind of reaction formation). Ford has always seen himself as more of a businessman than a politician, to the extent that he refuses to acknowledge that he’s a politician at all. “I’ll tell you right now,” he said, presumably with a straight face, during the June 2 instalment of his radio show, “I don’t like politicians; they’re self-serving.”

Indeed, Ford’s contempt for politicians (and government, generally) is what got him elected in the first place. The problem is that Ford has so divorced himself from the notion of being a politician that he has, perforce, failed to deliver anything of value to the people who granted him access to the mechanisms of government he professes to despise. It’s a sort of self-defeating meta-populism sustained only by Ford’s apparent imperviousness to irony.

Outside of Ward 2, of course, Ford is relatively harmless. Councillors can, and have, safely nixed his more fatuous schemes (that Port Lands Ferris wheel project, for example). Councillors can, and have, censured his more idiotic remarks (that one about Margaret Atwood, for example). But councillors’ powers are limited to preventing Ford from interfering with other people’s jobs — they can’t make him do his own.

That’s not their job.