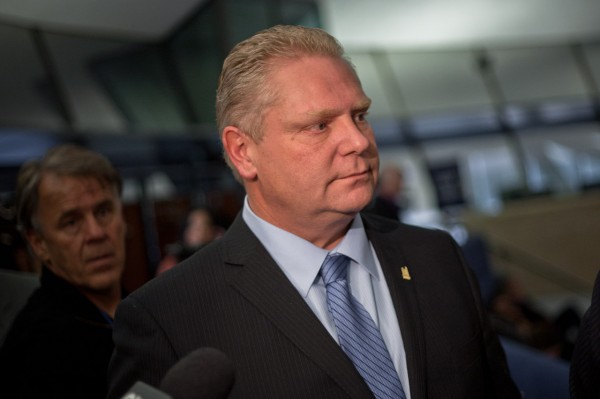 It struck me over the weekend that when I look back on this four-year hallucination known as the Ford administration, I will be summoning up a composite image that has the physical presence of Rob, but the voice of Doug.

Doug — he of the tedious Fox News-style cliches (“social engineering!”), the rhetoric tinged with glares and threats of violence (“…every time you guys [the media] go after Rob, I’m going after you…”), the inanities (“all taxes are evil”), and, of course, the vulgarities (“…in my opinion, the TTC needs a complete enema”).

His dexterity with the language came to mind again recently when, after announcing that he would not be seeking re-election in Ward 2, Ford offered up this curiously constructed chestnut for The Toronto Sun’s Don Peat, on the question of whether he and his brother would try to re-open the casino debate.

“When are we going to stop at this city — this nanny state?” Ford told Peat. “I can’t stand when other people tell the public what they can do or can’t do. You can’t buy bottled water, you can’t do this, you can’t do that. Why? Because we’re smarter than the public.” (emphasis added).

Doug, like his brother, has the distinctly creepy tick of segregating his critics (or ordinary people who disagree with him) from “the public.” They are the “other.”

I’d bet a ride on the London Eye that Doug would be hard pressed to explain why, in a British-style parliamentary democracy, we use the phrase, “Her Majesty’s Loyal Opposition.” Today’s media shorthand drops that crucial adjective “loyal,” which, I think, does a disservice to not just the institution but the underlying principle. Questioning, debating, criticizing — these verbal gestures are, by definition, loyal acts. It means that those who peacefully challenge the government and its spokespersons and programs are serving their country, region, city, etc. Political dissent and political leadership exist on the same moral plain, lest we ever forget.

Of course, politicians of all stripe love to accuse one another of pursuing policies that will destroy [insert jurisdiction here]. Such language, perhaps paradoxically, is privileged by the principle of loyal opposition, and is arguably important in debates where crucial or defining policy decisions are being made.

Yet Doug’s own rhetoric never rises above the level of veiled threats and content-free sloganeering. His approach to his political opponents brings to mind Ralph Klein’s infamous taunt — made during the 1980s National Energy Program fight between Pierre Trudeau and Alberta premier Peter Lougheed when he was mayor of Calgary — that the “eastern bastards” should “freeze in the dark.”

Mostly, though, Doug comes across as one of those guys who has spent way too much time soaking up the pugilistic nature of American politics and punditry. War, according to von Clausewitz’s famous construction, is “politics…by other means.” But the extraordinary gridlock in American politics frequently suggests the reverse — the glowing embers of a not-quite-extinguished civil war, fanned to life by contemporary neo-conservative rhetoric about liberty, freedom, and other Enlightenment absolutes that don’t actually exist in the real world.

Is that the psychic place that Doug wants to take this city, with his endless harping (he’s not alone in this, of course) about the honest “folks” in the suburbs and the self-serving “elites” in the downtown? Are they really fierce enemies of one another? The North and the South? The coasts and the fly-over states? Us and them?

The soundtrack of Doug’s journey through this term of council isn’t just about self-serving partisanship. It also contains many other percussive noises — the chronic lying (e.g., his insistence, which I debunked in The Globe and Mail, that he didn’t spend a cent on his office budget); the Freudian compulsion to upstage and undermine his younger brother; and the mindless slogans about government as a “nanny state” fueled by “evil” taxes.

I’ll bet Calgarians in the past few days have been grateful for the emergency services funded by the aforementioned “evil” taxes.

Beyond the verbiage and the media profile he so obviously craved, it’s difficult to know what Doug has accomplished since he arrived at City Hall in late 2010,(something Spacing has tried to figure out without much success). The mayor’s subway promise didn’t materialize, at least partly because the first sustained target of Doug’s bullying was ally-turned adversary Karen Stintz. His meddling with Waterfront Toronto begat his brother’s first resounding council loss. Much more recently, the Woodbine race track/slot facility, which is part of his ward, lost out on a chance for a significant expansion because the brothers didn’t have the common sense to work out a compromise during the casino fight.

What’s in the wins column? The garbage out-sourcing deal, the bag fees, a small army of intimidated civil servants (if that’s how you measure success).

When the mayor finally leaves office — in a manner that has yet to be determined, but is unlikely to be gracious — I predict that his most immediate legacy will be that his successor — left, right or centre — will bend over backwards to project a calmer, duller, and more conspicuously professional approach to the job.

Doug’s own legacy is more complicated to assess. On one hand, he’s done more to energize the left than any progressive organizing movement I’ve ever encountered. On the other, he’s filled Torontonians with the kind of loose, toxic speech that not only brings about legislative gridlock, but encourages the politics of polarization in a city that desperately needs more bridges and fewer fences.

I don’t want fewer conservatives on council; balance is important. What I want are more conservatives who recognize the centrality of vigorous, fact-based policy debate; who value and practice civility in politics; and who understand both the mechanics and the role of consensus-building in local government.

Doug — allegedly the smarter brother, but not really — was absolutely tone-deaf on all three counts, and his absence, at least in this space, will not be missed.