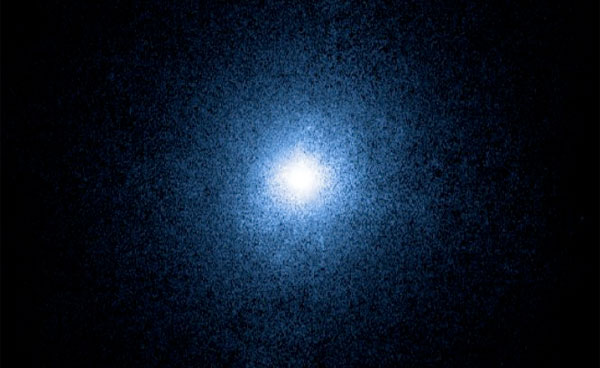 This is a photo of a star called HDE226868. It’s a blue supergiant, more than 20 times as big and hundreds of thousands of times as bright as the Sun. It’s relatively close by — in the same part of the galaxy as we are: a thin line of stars between two of the great spiraling arms of the Milky Way — but it still takes light 1,600 years to reach us from there. It’s about 16 quadrillion kilometers away. You can’t see it with your naked eye; you need at least a small telescope to glimpse it through the clouds of interstellar gas and dust that stand between it and us.

But as far as X-rays go, this patch of sky is a shinning beacon. The signal we get from it is stronger than pretty much anything else we can see. And since blue supergiants don’t give off that kind of radiation, we know those X-rays must be coming from something else. Something powerful. Something we call Cygnus X-1.

Charles Thomas Bolton figured that Cygnus X-1 was probably another star. He was just a young astronomer back in 1971, having come north from the States to do his postdoc at the University of Toronto. He spent a lot of his time at the school’s astronomy facility in Richmond Hill: the David Dunlap Observatory. The beautiful stone and dome complex had been built in the 1930s on an estate of nearly two hundred acres just north of the city. It housed the second biggest telescope in the world when it opened. William Lyon Mackenzie King was there to help celebrate the opening. Stuttering King George and his wife Elizabeth (who you might know better as the Queen Mum) made sure to see it on their trip across Canada. It’s still the biggest telescope in the country. And when Bolton pointed it at Cygnus X-1, he was hoping to find evidence of a neutron star.

Neutron stars are small but incredibly heavy, the dense remnant of a bigger star after it dies in a supernova explosion. They give off X-rays like crazy. And early observations seemed to confirm Bolton’s suspicions: he could see that HBE226868 was wobbling slightly, which meant that there must be a massive source of gravity nearby. If that source of gravity was a neutron star, he’d have discovered a binary system: two stars orbiting around each other. It would have been an exciting find for the young astronomer, who was particularly interested in those systems.

It seems that once upon a time, there was a really, really BIG star. Like more than 40 times bigger than the Sun big. For most of its life, it did what all stars do: crush hydrogen atoms together, the immensity of its gravity causing nuclear reactions to fuse them into helium. In fact, it was so big that eventually it was fusing that helium into even more complex elements, stuff like carbon and neon and oxygen and silicon. That’s where all those elements come from: every single atom forged within a star. By the end of their lives, the very biggest stars make an even more complex and even heavier element: iron. And so, at the centre of this particular gigantic star, a huge iron core built up. Eventually, it was so heavy that its atoms couldn’t support its own weight anymore. The star imploded. The enormous mass was crushed down into a tiny space. It became so dense, and its gravity so strong, that nothing coming close to it could ever escape again — not even light. It had become a black hole.

HBE226868 whips all the way around Cygnus X-1 once every five or six days. A long tail of material gets sucked from the star down toward the black hole, heating up into a disc of plasma as it nears the event horizon – the point of no escape. That, it seems, is where all those X-rays are coming from. Meanwhile, two long jets of particles are sent streaming away at the near the speed of light.

Now, before Charles Thomas Bolton, no one had ever found a black hole. Einstein’s theories of relatively – and the quantum physics that followed – had predicted them, but in the 1970s there were still plenty of scientists who didn’t believe they existed at all. Bolton knew that going public with his discovery was going to be risky. It would either make or break his career. It wasn’t until a pair of scientists in England – and then another one in the United States – seemed to confirm his findings that he published his paper. Even then, it was extremely controversial. People put forward plenty of arguments against it. It even became the subject of a famous bet between Stephen Hawking and another physicist, Kip Thorne. Hawking, who had long believed in black holes, says he was 80% sure that Bolton was right, but bet against it anyway. That way, even if he’d been wrong about black holes his entire career, he’d still win something.

But he wasn’t wrong. In 1990, enough evidence had finally piled up to convince Hawking without a doubt. Bolton was right. Cygnus X-1 was a black hole. The David Dunlap Observatory had discovered an extraordinary phenomenon never seen before. So, one night, Hawking broke into Thorne’s office and signed the bet. He owed the physicist a one-year subscription to Penthouse magazine.

Today, the existence of black holes is a widely-accepted scientific fact and supermassive black holes, waaaay bigger than Cygnus X-1, are believed to sit at the centre of many galaxies, including the Milky Way. They’ve become a staple of pop culture, too — Bolton’s discovery would even inspire a Rush song: “Cygnus X-1” (28-minutes long and spread across two albums).

Meanwhile, the future of the David Dunlap Observatory seems to be secure after some recent doubts. When developers unveiled a plan to turn most of the observatory lands into housing, community opposition led to a mediated settlement which will see more than half of the land end up in public hands. Nearly 80 years after the observatory first turned its telescope to the sky, you can still look through it yourself.

Image: HDE226868 via the Wikimedia Commons