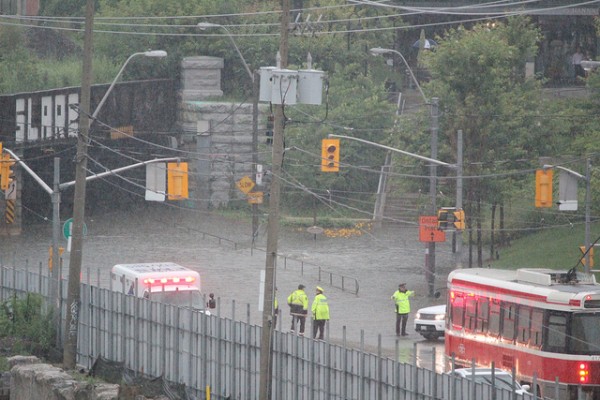 It’s no coincidence that places like Christie Pits, Trinity Bellwoods Park, and the train bridge underpass at King and Atlantic streets were all affected by yesterday’s storm and flood; all three locations sit atop Toronto’s most famous “lost” waterway, Garrison Creek.

Buried since the early 1900s, Garrison Creek now flows through a series of storm sewers from north of Davenport Road down to Lake Ontario. Christie Pits and Trinity Bellwoods are along the route of the creek proper, while the corner of King and Atlantic (pictured above) is near an adjoining buried waterway called Asylum Stream.

Yesterday, though, the Garrison and its offshoots resurfaced with a vengeance. That this rarely happens is a tribute to the strength of Toronto’s underground infrastructure, and a powerful reminder of why it should never be neglected in the name of fiscal restraint.

There are a number of fantastic resources for more information about the creek, including maps and details on the Lost River Walks website, as well as fantastic sewer photos and a detailed history by Michael Cook on his website, The Vanishing Point. Cook’s posts, in particular, are stunning elegies to both Garrison Creek itself and the sewers that now contain it.  “Despite the choice by newspaper writers and the City of Toronto to refer to the Garrison as a creek ‘which no longer exists,’” Cook writes, “it is a waterway that very much does still exist, both beneath our feet and in the character of everything that surrounds it.”