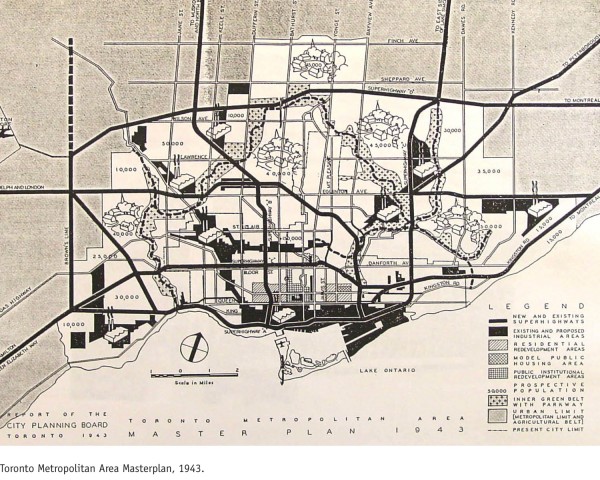 Over the next several weeks, Spacing will be publishing a series of articles from Concrete Toronto: A Guidebook to Concrete Architecture from the Fifties to the Seventies (Coach House Books, 2007) as a companion of Spacing’s summer 2013 issue focused on Modernism.

Within the large-scale planning exercises following World War II, expressways were viewed as the key means of interconnecting the Toronto region and controlling its outward growth. Metro Toronto planners developed schemes for an extensive highway network, servicing every corner of the growing metropolis. The Don Valley Parkway was the first north-south portion to be realized.

The expressway went through several iterations before finding its final resting place along the length of the Don Valley. Originally intended to parallel the Don only downtown, north of the city it was to exist as a widened Don Mills Road. Fierce protests from developer E. P. Taylor, protective of his highly successful development of Don Mills, pushed the highway project east toward the ravine. The approval of the massive Flemingdon Park housing development on an undeveloped plateau south of Eglinton Avenue pushed the expressway off course once again, placing it in its current position. As such, it is a project shaped as much by development as by topography. 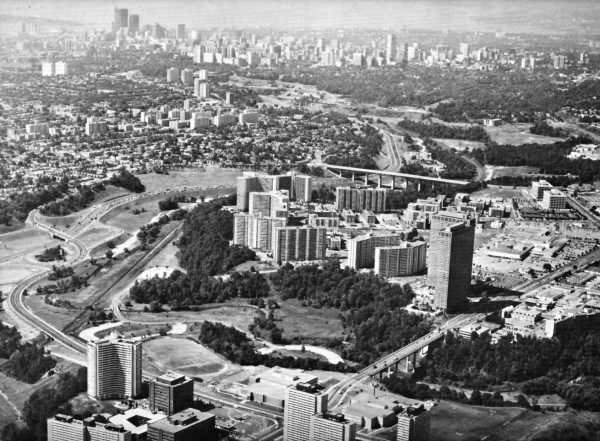 The new “superhighway” was to enable the creation of a series of tightly designed modern communities loosely modelled after Don Mills along its length, separated by the ravine’s green space. Flemingdon and neighbouring Thorncliffe Park were the first to take shape, as well as the first suburban communities in North America to consist of high-rise apartments. They were also designed to bring downtown amenities to the suburbs, including employment, retail and a new ‘motor hotel.’ Northern Flemingdon was originally planned to be the home of the CBC’s new English-language headquarters, complete with a ‘cultural village.’ These developments satisfied the goal of carefully arranging highly organized suburban areas along infrastructure.

As the ideals of these satellite communities gave way to all-out suburbanization, the subsequent developments along the expressway were not as neatly conceived. However, vestiges of the planner’s original intentions can still be seen in the high-density apartment clusters along the DVP’s length, continuing well north of Highway 401, such as Parkway Forest, the Peanut and so on. The legacy of this development had made driving on the DVP one of the most modern experiences in the city and perhaps even the country. Rolling topography, a curving concrete highway and hundreds of high-rise apartment buildings poking out amid the forest canopy create a linear essay in modern ideals. 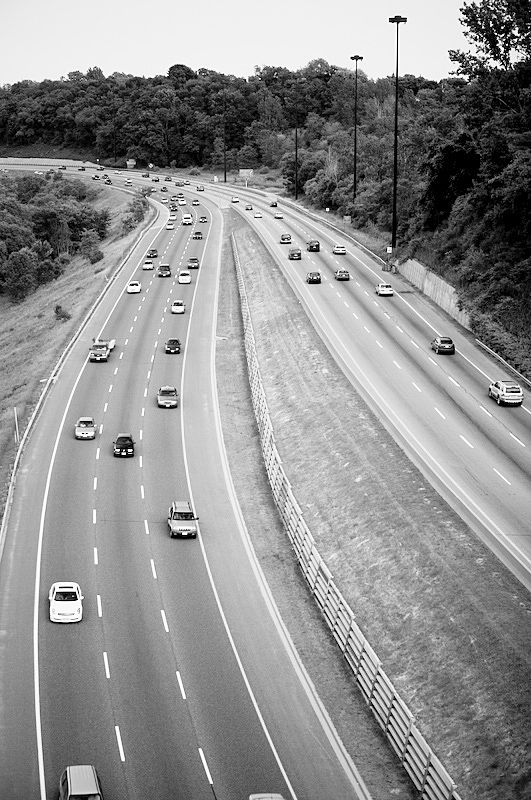 The DVP near Don Mills Rd.

Today the DVP exists as a period piece, its mere six lanes conceived long before Toronto became the congested metropolis of today. It was planned in an era when the pleasure drive was still a possibility and expressways were a novelty. For this true ‘parkway,’ the experience of the thoughtful curves was apparently as important to the concept as raw efficiency. Now well beyond capacity, the DVP is trapped in its bygone form by the ravine on either side, safe from development by the conservation authority. When stuck in today’s endless gridlock, one can at least take in some of Toronto’s most attractive vistas: big, green and thoroughly modern.