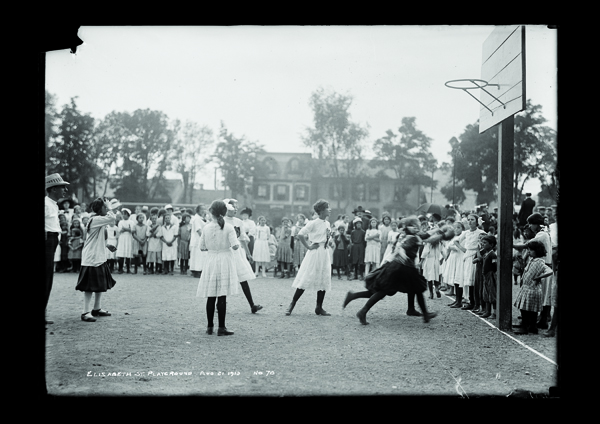 Excerpt from “The History of Playgrounds” by Erica Simmons

We take playgrounds for granted. Like parks, schools, and libraries, they are a natural part of city life, a place where kids can burn off that seemingly unlimited supply of energy.

But Toronto’s playgrounds were actually invented at the turn of the 20th century, a result of a passionate struggle over the rights of children and the use of the city’s public spaces. Toronto’s first playgrounds were created in a desperate effort to help children who were growing up in squalid, poverty-stricken downtown slums.

Conditions in slum areas such as St. John’s Ward (between Yonge and University, from College down to Queen), the area east of Parliament, and around Bathurst and Niagara streets were abysmal. Toronto’s crusading Medical Officer of Health, Charles Hastings, argued that “what we have read of with disgust as having happened in the cities of Europe in the Middle Ages, happens in Toronto now before our very eyes.” He warned that Toronto’s slums, crowded with immigrant families in ramshackle houses, were “a menace to public health, affording hotbeds for germination and dissemination of disease, vice, and crime.”

With no playgrounds or parks nearby, slum children had no choice but to play in refuse-strewn alleyways or on the streets. Many youngsters were injured or killed in collisions with horse-drawn carts, streetcars, bicycles, and the first cars. Hundreds of children on the streets earned money by begging, selling newspapers, shining shoes, running errands, or delivering messages. Girls often had infants and toddlers — their younger siblings — in tow. Some children slept on the streets, unwilling to return home, or without a home to go to.

To read more of this article by Erica Simmons,  pick up the latest issue of Spacing or subscribe.

Photo from City of Toronto Archives