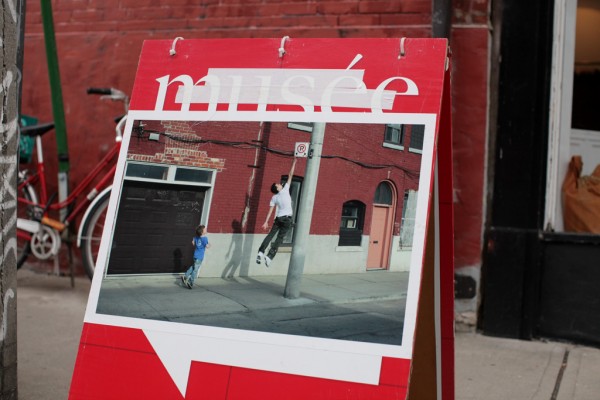 Toronto artists Sean Martindale, Adam Krawesky, and Martin Reis are tired of sandwich-board condo ads cluttering the city’s sidewalks, so they’ve used their talents to repurpose three dozen of them.

The result is Overboard Additions, a series of art installations that turn the ads into streetside photography exhibits.

“It’s just become absurd the number [of ads] that the companies are putting out now,” says Martindale on the inspiration behind the project.

“We just wanted to do kind of a small gesture to highlight that a bit more and then also offer up a different purpose for these things.”

The trio collected 36 sandwich boards and pasted their own photography overtop of the pervasive fold-up ads. Then this week they placed the installations around the sites where the photos were taken, including Regent Park, Liberty Village, and along Bloor St. west of Lansdowne Ave.

All the boards the artists used were taken off a single stretch of Spadina Ave. from Queen St. W. to King St. W., where Martindale says many are concentrated.

“We could’ve collected more than 36 just in that stretch alone. On some intersections it’s to the point where there’s like 40 on one intersection, 10 on each corner,” he says.

Some boards feature street photography depicting scenes of everyday life. Others display decade-old shots of buildings that have since been torn down to make way for more condos. But all now send a very different message than one of luxurious living.

“I guess for me it’s just an act of protest against the proliferation of these sandwich boards, which are everywhere and completely unregulated,” says Krawesky.

Martindale notes some of the condo ads he sees are posted with permission from the city, but “the vast majority of the things don’t have any registration on them.”

For Martindale, the ads – which he says average 32 by 48 inches – are more than just an eyesore; he says in some places they’ve become a safety concern.

“If you do have any mobility issues, or even if you’re just trying to access the street from some of these corners, they really block the way,” he said, adding, “I took a photo of one where the sandwich boards were all positioned around the fire hydrant.”

Reis agrees. “I’ve had many people come up to me and say, ‘Hey, you know, this is crazy, I can’t even get across the street, I’m tripping, they’re kind of interfering,'” he says.

Addressing this issue specifically, some of the installations present images of sandwich boards clustered together on sidewalks.

Each photo can be peeled off “without even damaging the ad behind it,” explains Martindale, who has made art out of ads before. In 2010, he fashioned illegal vinyl condo ads into tents and distributed them around the city.

Martindale says he has no illusions about the sandwich-board installations alone changing anything, but he, Krawesky, and Reis are “hoping that it might push the conversation towards that direction, because it’s just become ridiculous.”

“If you are going to use the space, I think maybe putting art on it is a much better use than just advertising,” says Reis.

Here’s a map showing where all of the installations can be found.

View a gallery of some of the installations below.