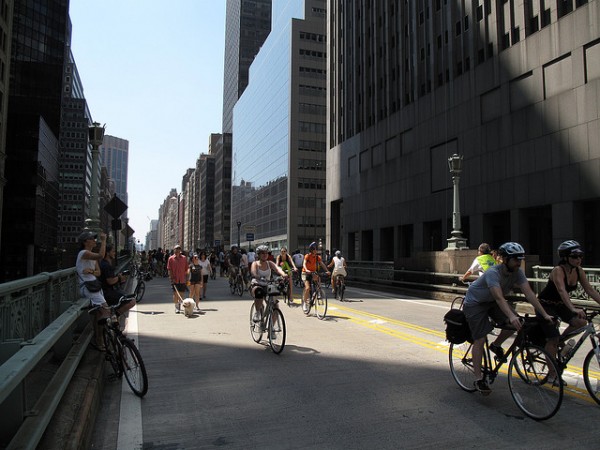 Pedestrians and cyclists alike may soon get their chance to take over a major street in Toronto, if only for a few days during the summer.

Open streets are events where long stretches of urban roadways are shut down to motorized vehicles, but open to almost any other kind of traffic, and they’re exactly the kind of thing Councillor Kristyn Wong-Tam wants to see in the city.

“Imagine our streets becoming the new playground for Toronto and for Torontonians of all ages,” said Wong-Tam at the Nov. 16 Open Streets Summit at Ryerson University.

A number of experts joined Wong-Tam at the summit to discuss the possibility of bringing the popular events – also known as ciclovías – to the city. New York, Paris, Mexico City, and a slew of others already have open streets programs, and the general consensus at the summit seemed to be it’s time to try one out in Toronto.

“The great thing about this program is that it’s already been tested in other parts of the world,” Wong-Tam told Spacing.

“I think it’s a fantastic way to promote physical activity without building another community centre,” she said in the follow-up interview.

Asked what made her get involved with open streets, Wong-Tam said, “I really believe that bringing mass participation through physical activity and recreational programs is beneficial to the city.”

Gil Penalosa, director of 8-80 Cities, a Toronto-based not-for-profit organization that promotes open streets events worldwide, thinks the events can be successful in the city.

“Toronto could have the best open streets program in the world,” Penalosa told the about 100 in attendance at the Saturday morning summit, noting Toronto’s relatively flat surface and small overall area create favourable conditions for the events.

During his presentation, Penalosa said open streets have the potential to bring communities together, while promoting physical health. A city’s economy can also benefit from increased pedestrian and cyclist traffic passing local businesses, he said.

Dani Simons, a former communications director for New York City’s transportation department, also spoke at the summit. In 2007, Simons helped bring ciclovías to New York through the Summer Streets project, opening up about 11 kilometres of roadways in the heart of Manhattan for recreation.

“It’s something that people look forward to every summer,” she said of New York’s Summer Streets events, which occur annually three Saturdays each August and draw crowds in the hundreds of thousands.

“It really helps people rethink the way that streets are used,” said Simons, crediting the program with helping garner support for initiatives such as an 8th Ave. redesign that added protected bike lanes and a pedestrian medium to the busy street.

Wong-Tam told Spacing she is currently waiting on a staff report on open streets that is seven months overdue. Once she receives and reviews the report, a motion can be put to council for adoption.

With council’s approval, Wong-Tam said Toronto could see three to four open streets events from May Two-Four weekend through to Labour Day weekend in 2014.

So far one of the main candidates for hosting an open street is Bloor.

An ideal host is transit-accessible (but not a streetcar route), flat, iconic, and has historical value, said Wong-Tam.

No route has been finalized, but a minimum goal of 10 kilometres has been set for the event. The logic is the longer the route, the more appealing it becomes for participants, especially cyclists who cover distances faster than pedestrians. Lengthier routes also link up more communities, meeting another objective of open streets initiatives.

But how much would open streets in Toronto cost?

Wong-Tam said it was too early on to give an accurate budget estimate, but explained the City won’t be responsible for funding, and there won’t be an admission fee either.

“We haven’t asked the City for any money. I’ve actually committed to this organization (8-80 cities) and working group that we will raise $1 million ourselves.”

“The actual cost will be largely dependent on policing costs,” she said, adding if volunteers and security guards can be used to oversee the event, it will be considerably less expensive.

Other costs associated with the proposal are event promotion and branding, as well as recruitment.

To raise funds, Wong-Tam is looking to private sponsors. “If you were a company that wants to sponsor something that brought out hundreds of thousands of people repeatedly over the summer months, wouldn’t this be a great event to connect with?” she said.

While turning the project from idea into reality has been more than a year in the making, Wong-Tam is optimistic about seeing open streets in Toronto by summer 2014.

“If they can do it in New York, then I think we can do it here,” she said, adding, “and I actually think that we could probably do it better.”