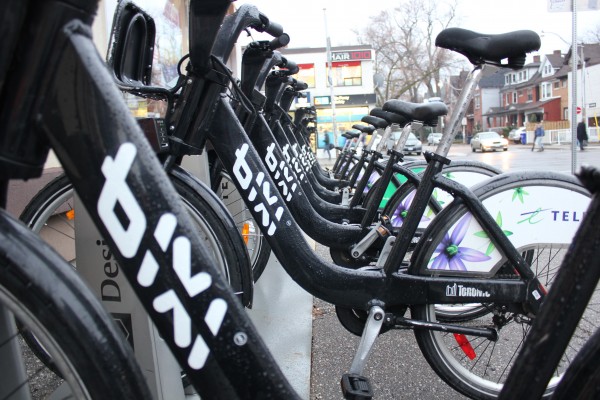 While city hall, last month, was dominated by one man’s almost unbelievable personal implosion, the business of Toronto is moving ahead… and it’s doing it on a Bixi.

The future of the embattled bike sharing program has been uncertain, as Bixi Toronto Inc. has been unable to reach its financial goals. The program was launched with the help of a $4.5–million loan, guaranteed by the city, which the company has struggled to make payments on. Many said the scale of the roll-out was too small and centralized to be reliable, or effective. Added to this was the political pressure from bottom-line, or anti-cycling politicians who could not, or refused to see the value in a clean, sustainable, and relatively cheap mode of transportation.

But, it seems, Bixi has been granted a reprieve by council, after a motion passed unanimously to save the program. The vote united councillors of every political stripe, with representation from every geographical corner of the city. The plan is not only to save Bixi, but to look seriously at ways to expand it.

“What you’ve seen today is city council demonstrating its political will to try to do the best that we can to preserve the Bixi program,” Councillor Kristyn Wong-Tam told Spacing.

The motion was to receive a report from the General Manager, Transportation Management which recommends the city transfer ownership of the program to the Toronto Parking Authority, pay-off the remainder of Bixi Toronto Inc.’s roughly $3.6–million debt, and seek a new private operator. The report also offers a number of potential funding opportunities, Wong-Tam said, which may explain council’s unequivocal support.

“We have money, and we can secure more money,” Wong-Tam said. “What we don’t have coming out of this right now is a clear strategy on management and expansion.”

In addition to adopting the report’s recommendations, council moved to make the installation of new Bixi stations part of the planning approval process, where suitable for new developments, to examine changing the parking standards for multi-unit residential and commercial developments to include Bixi stations, and encourage councillors to create timetables for Bixi expansion in their ward.

In her own Ward 27, Wong-Tam managed to secure $1–million for Bixi from private developers, as part of a Section 37 agreement. This type of agreement reaps benefits from developers — sometimes monetary, or in the form of a public amenity — in exchange for exceptions to local laws and guidelines concerning density, height, or other considerations. Essentially, councillors can leverage the private sector to help expand Bixi, in a way which is mutually beneficial to both the city, and developers. Both parties avoid a protracted Ontario Municipal Board tussle, and everyone gets a little something.

During the meeting, a man in a Toronto Argonauts jersey, for some reason allowed on the floor of council, rabidly warned of the damage this may cause to developers who are forced to enter into these agreements; however, he left before the vote was held, and was censured by council the next day.

What the Argos fan fails to understand is: generally, developers prefer to reach an agreement with the city to fighting tooth-and-nail at the OMB for minor variances, and the possibility of losing an application makes project investors nervous. Moreover, having a Bixi station at the front steps of a condo building could be an attractive amenity to potential residents.

“The benefit that the developers are seeing is it reduces the need to spend a lot of money on underground parking that is mandated but — as they have been saying for a long time — isn’t necessary, and is actually an unnecessary financial burden,” says Miller.

In short, there are partnerships available which could ensure Bixi’s future, to the benefit of everyone involved. Private development can go hand-in-hand with the expansion of Toronto’s multi modal transportation network.

Why has a bike sharing program, similar to so many others springing-up in major cities all over the world, had such uneasy beginnings in Toronto?

Dani Simons is the director of marketing and external affairs for NYC Bike Share, which operates New York’s Citi Bikes, and says the value of the program was never really in question.

Simons says the city looked at sustainable ways to accommodate the anticipated newcomers in the ever-growing metropolis, and undertook the biggest roll-out of a bike sharing program in North America, with 6,000 bikes, and plans to expand. Bixi, by comparison, has 1,000 bikes.

“In order to make it work: this had to be big. It had to be a transportation option,” says Simons. “It couldn’t just be in one neighbourhood, because that doesn’t get you anywhere, and it wouldn’t be useful that way.”

“I think the city really limped into it,” says Kolb.

Bixi’s highest usage rates are all along the periphery of its current boarders — very centralized in the downtown core — which, says Kolb, suggests there is high demand for bike share from outside the reach of the current roll-out.

“Our sense of it is that it’s not broad enough, not dense enough to really take off.”

Chicago, the next largest North American city, after Toronto, launched their Divvy bike share program last summer, which now has some 3,000 bikes. Nearby suburbs of Oak Park, and Evanston, Ill., are currently working with the Chicago Department of Transportation to extend the network to their neighbourhoods.

Sean Hertel is an urban planning consultant who has been travelling back and forth between Toronto and Chicago, and says the “entrepreneurial enthusiasm towards urbanism” of the latter may explain the vigour with which the Windy City pursued its own bike share program.

“It just embraces new ideas with a gusto, and it just does it,” Hertel says. “It doesn’t do so with the expectation of 100 per cent success.”

The Next Stage for Bixi

With council’s support, and opportunities for funding to be had, what is the next stage of the journey for the fledgling bike share program?

For Hertel, it’s a question of integrating requirements for various modes of transit, like bike sharing, into our development approval process. Add to that a greater visibility: waking people up to the alternative Bixi provides. “It’s a psychological barrier as much as it is a political one, or a financial one.”

Hertel also says involving the suburbs is crucial. (If the man in the Argos jersey has taught us anything, it is that we ignore our inner suburbs to our mutual peril.)

“Imagine living in a tower-in-a-park development,” says Hertel. “Imagine what access to a Bixi bicycle could afford you, in terms of mobility.”

“I would like to see it not just as a downtown boutique travel option.”

Both Hertel and Simons also speak to bike sharing as a possible solution to what is sometimes called “the last mile.” This is the leg of a commute which is not served by higher order transit. It is that 30 minute walk from your house to the closest subway station, for instance.

While some riders might use Bixi, if it were available, as the sole mode to get from, say, the suburbs to downtown, perhaps a Point A to Point B model shouldn’t be the focus. Bixi, instead, could help alleviate the “last mile” of a trip, while higher order transit like LRTs or subways can bear the longest stretch of a commute.

For this, Bixi stations on, or near TTC property is key. TTC staff reports have indicated that there is little free space available on their subway station properties, which means the city will have to work with the private sector to ensure Bixi stations are hard-by subway or LRT stations. Proximity to other transit options, Kolb says, is an essential next step for the program.

Safety, as well, is key to Bixi’s success. The same meeting that saw Bixi saved, also green-lit an environmental assessment examining the possibility of bike lanes on busy Bloor St. If potential riders are afraid to cycle in the city, a newly expanded Bixi system is ultimately doomed to fail.

Bike sharing is working in other cities. The level of success has varied, as has the measure for success in a given municipality. It is encouraging to see council speak with one voice, (apologies to the Argos fan), in favour of giving the program another shot, and looking, actively, to foster it, grow it. But there’s still work to be done.

“We have to look at how users come together, and why they want to use the program,” said Wong-Tam.

If we don’t, and Bixi finally rides into the sunset, then, as Miller says, “we end up looking over the fence at other places that have taken some bold steps, and are benefiting from it.”

For Hertel, it means “a new method of accounting” when it comes to Bixi bikes.