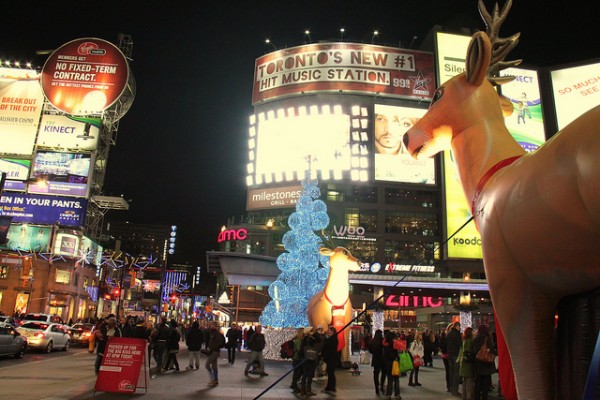 So it seems appropriate to mark our respective 10th anniversaries by discussing another, much more thorough academic analysis of the making of Yonge-Dundas Square, in this case by a former professor and director of the School of Urban and Regional Planning at Ryerson University, Beth Moore Milroy (full disclosure: the author and I worked together as members of the Toronto Pedestrian Committee for several years). Her book Thinking Planning and Urbanism (UBC Press, 2009) is a meticulous reconstruction of how Yonge-Dundas Square came into existence in its curious public-private form. In addition to unfolding practically at her office doorstep, right at the edge of Ryerson, the square offers a fascinating case study revealing the interaction of planning, politics and development. Put less politely, the book reveals in remarkable detail exactly how the sausage was made, and it is not pretty. 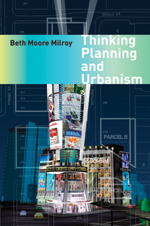 A brief survey cannot do the book justice, and indeed part of it is really aimed at planning students and professionals, asking them hard questions about how the case brings theories about planning into question. But there is also plenty in the book for anyone interested in Toronto’s recent history, the intersection of politics and planning, and in general how cities develop the way they do.

The book starts with a look at the history of perceptions of Yonge Street and attempts to revitalize it beginning in the 1970s. Milroy shows that emotional arguments that Yonge was the “heart” of the city have for a long time been an essential driver for various halting attempts to revitalize it. These attempts began with the short-lived summer pedestrianization in the 1970s. A later attempt yielded only the sidewalk chess tables on Gould Street outside Sam the Record Man’s — tables that subsequently fell victim to further revitalization efforts. The Eaton Centre, too, was both an attempt at a solution and a cause of further problems.

The core of Milroy’s book is an examination of two very different, almost parallel regeneration efforts that intersected in the mid-1990s. One, growing out of previous efforts, was a evolutionary plan developed by Toronto’s city planners with a lot of community consultation, which included projects such as restoring the facades of buildings along the street.

As this plan was being developed, however, another quite different one emerged, driven by the then-city councillor for the area, Kyle Rae, and some of the local business and property owners. This called for a radical intervention through the purchase/expropriation and demolishing of buildings to create a public square and also newly developed commercial buildings around it. Milroy refers to this approach as “property-led entrepreneurial development,” similar to London’s Docklands development or New York’s Times Square redevelopment. It comes across as a kind of gonzo planning.

Milroy examines in detail how this plan emerged quite suddenly and was adopted by Toronto’s pre-amalgamation city council remarkably quickly. She also breaks down in considerable detail the kind of rhetoric used by proponents of this plan when it went in front of the OMB — a rare foray into examining how parties successfully argue before this tribunal, an important issue given the board’s power. She shows that, while the actual intersection of Yonge and Dundas had not previously been considered of much significance by anyone, once the plan was in motion it began to be assigned the description of the “heart” of the city.

Notably, at the OMB the City and the plan’s other proponents portrayed the planned square as fully public, on the model of Nathan Phillips Square (which can be booked for free and only for non-profit purposes). Milroy details how in 2001, however, as the square was being built, the City passed new by-laws governing the square that established a Board of Management (dominated by local business appointees), enabled the space to be rented commercially, and required it to pay for itself (a requirement abandoned in 2005). In effect, she argues, the square became public only “residually,” when no commercial renter could be found. Underlying the whole process, she argues, was also a desire to chase “undesirables” out of the area.

The thing about sausages, though, is that no matter how unpleasant they are to make, they often turn out to be enjoyable to consume. Somehow, despite the back-room deals, the much-criticized design, the underlying motivations, and the heavy commercialization, Yonge-Dundas Square has filled a need for the city. As Jonathan Goldsbie wrote in NOW on its 10th anniversary, “It is our neo-brutalist moonscape, and it is consistently subsumed and animated by our desire to make it the place we deserve. Like Toronto as a whole, it’s characterized by its capacity to become the constant invention of those who occupy it.” In addition to planning and politics, there’s another force that shapes the city, and that is its people. They can take the best-laid plans and make them their own. Even if the square is not exactly public, Torontonians have essentially decided to treat it and use as if it is fully public. And perhaps some day Yonge-Dundas Square will change again, for the better — and when it does, having Beth Moore Milroy’s surgical dissection of its origins in hand will help point the way.