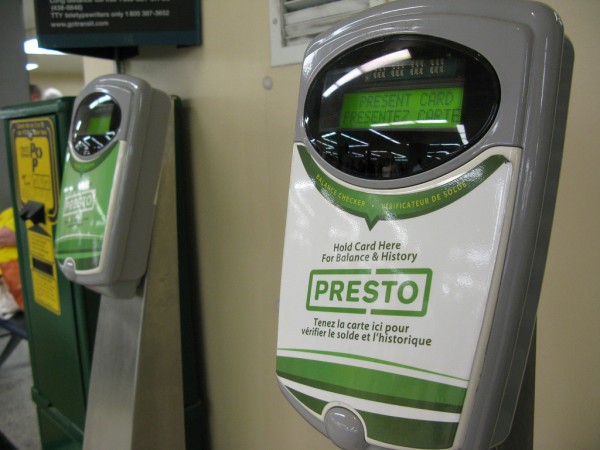 Accenture, the $28 billion private contractor building the Presto electronic fare network, last week won a contract to construct a similar system for Washington D.C.’s Metro, but at a fraction of the price paid by the Ontario government and using some of the software and network technology the company has developed for Metrolinx, Spacing has learned.

The development is likely to raise more tough questions about Accenture’s long-running, and oft-delayed, Presto project, which came in for harsh criticism from Ontario’s auditor-general in December, 2012, due to roll-out glitches, cost escalations and untendered contract extensions.

“By the time it is fully developed, Presto will be among the more expensive fare-card systems in the world, and more than $700 million may have been paid to the contractor for developing it,” former Auditor General Jim McCarter said at the time. The original ten-year contract with Accenture, signed in 2006, was worth $250 million.

Washington Metro last week announced that it had selected Accenture to build a next generation fare system to replace its current fare card, which was developed by Cubic. The six-year contract is worth just US$184 million, and will include 1,000 faregates, 450 fare vending machines, approximately 1,500 bus payment targets, and approximately 160 new payment targets at parking exit lanes. Riders will be able to pay with chip-enabled bank or credit cards, federal government ID cards, smart phones and so-called “SmarTrip” cards. The agency says it wants to eliminate tickets, and is in the midst of a $6 billion network upgrade.

The Metrorail system is the second busiest transit operator in the U.S., with 218 million annual trips and a $1.6 billion operating budget. Metrobus provides 132 million annual trips on 318 routes, according to an agency spokesperson. Over 90% of payments are made with reloadable SmarTrip cards; there are 3.1 million in use.

Metrolinx officials say they were aware that Accenture was bidding for the Washington contract, but insist that they didn’t know the final price of the contract.

The issue with the Washington deal is whether Accenture has used any of the intellectual property developed for the lucrative the Metrolinx project to cross-subsidize its winning bid for the Metro contract.

According to Accenture’s press release, the company touts the project as one of the first of its kind in the U.S., but notes that it is being “built using the Accenture Fare Management Solution, based on commercially off-the- shelf software products.” The company also claimed it has “successfully implemented” similar technology in Canada and the Netherlands.

She declined to describe what elements of the Presto system would be used in the Washington project, saying it was “commercially sensitive information.” Accenture, Shenk added, has extensive ticketing experience with the rail, airline and bus industries, and implemented one of the first mobile ticketing systems for the Spanish national rail operator.

That contract, according to a Metrolinx backgrounder on Presto, will allow Metrolinx to “reap future financial benefits should the system be successfully marketed elsewhere.” The backgrounder also notes that “this agreement is important as it provides clarity for the ownership of the intellectual property of the PRESTO system, and protects Metrolinx’ rights in the PRESTO system.” But the IP agreement specifies that Metrolinx only owns Canadian rights, whereas the contractor – Accenture – controls global rights.

According to a Metrolinx FAQ, there are currently 8,000 Presto devices on transit routes in Greater Toronto, Hamilton and Ottawa. The chip-enabled cards can be purchased in 70 locations, and there are almost 1 million users. Metrolinx and the TTC are still in the midst of a long-term project to make the card widely available on the region’s largest transit network. The agency says there will be 10,000 Presto devices on TTC bus, streetcar and subway routes by 2016.

As for the next generation “open fare” system that will allow fares to be paid by smart phones, bank cards and other media, Metrolinx says it is making a $236 million capital investment in this expansion. “PRESTO has technological releases planned over the next three years to continue to modernize the hosting and operating systems, incorporate feedback from customers and service providers, and based on ongoing research and evaluations.”