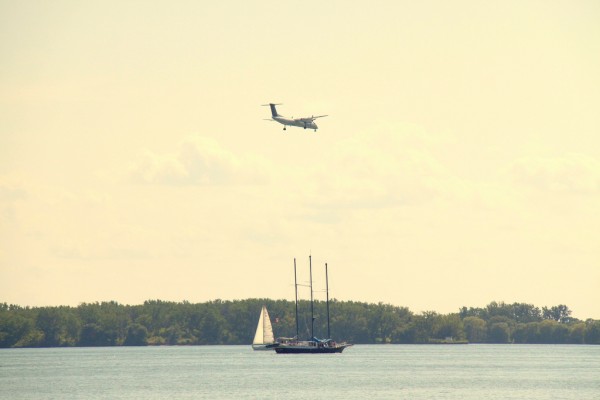 Okay, okay. I acknowledge the comparison may be over-reaching just a tad. But as the independent aviation analysts with Transport Action Ontario (TAO) made clear at a press conference yesterday, the geographical contours of a jet-based airport – runways, approach lighting, marine exclusion zones (MEZ) and the so-called “precision approach” flight path – will, uh, occupy much more of the harbour than was previously understood, or officially acknowledged.

As one speaker trenchantly noted, Porter’s jet proposal will be profoundly transformative – no longer will Toronto have an airport on the waterfront. We’ll have a waterfront within an airport.

As executive committee convenes this morning to mull over a staff report that recommends an elaborate set of pre-conditions, including a new agreement with the Toronto Port Authority to impose hard passenger and slot caps, the TAO group, together with veteran planners Ken Greenberg and Paul Bedford, will urge the members to “just say no.”

But the staff report that was released last week — which recommends punting the decision until next March due to a dearth of data about the Bombardier CS-100s that Porter wants to use at the facility — doesn’t quite say no.

Rather, it lays out an elaborately phased set of hurdles that TPA and Transport Canada must meet before council can proceed with an amendment to the Tripartite agreement. These include adopting measures to contain noise and deal with road congestion, completing an environmental assessment of the runway extension, negotiating an airport master plan, and, obviously, ensuring that all the regulatory approvals are in place.

Last year, council also added another condition: that any new activity on the airport not encroach on the Western Gap.

The TAO’s 62-page report shows that the staff report failed to describe in detail the potential impact on the harbour of the safety measures used by Transport Canada for runway approaches at airports across the country. Because jets fly in at a shallower angle than propeller planes like the Q-400, they require a longer approach and depend on navigation lights when landing in low visibility conditions.

Consequently, the footprint of the whole operation could be far larger than what Porter is proposing. It encompasses much of the Western Gap, a swath of the inner harbour that extend as far as Harbour Square, and some of the Portlands. The Port Authority, says the TAO, would also need to set up a line of navigation lights in the middle of the harbour, forcing the Hanlan’s Point ferries to change their route.

The imponderable in all this is whether Transport Canada grants Porter and the yet-to-be-launched CS-100s an exemption from rules that govern all other airports in the country. “There’s no prospect of meeting the stringent conditions set by the City of Toronto and Transport Canada unless the exemption is granted,” said TAO president Peter Miasek. “Safety will overrule all other uses of the harbour.”

It’s difficult to know why council would proceed with a rush vote, as urged by deputy mayor Norm Kelly and mayoral candidate Karen Stintz, in the absence of much more precise information from the agency that controls the future of the proposal. Transport Canada has not yet revealed its assessment of the plane, or the runway/MEZ requirements.

But one could reasonably ask why the government, which asserts its regulatory authority in the interest of public safety, would opt to withdraw from that fundamental obligation in one of Canada’s most densely populated areas.

Then there’s the issue of the risks and liabilities associated with an exemption that allows jets to use the facility. Do the city’s insurance premiums rise because jets will be landing and taking off so close to key pieces of municipal infrastructure? Does an official exemption from Transport Canada protect the Port Authority, or Porter for that matter, from liability lawsuits in the event of a crash or collision? The island ferry, TAO analysts pointed out, is high enough to protrude into the flight path of incoming jets. What if a careless skipper someday steered his craft into the MEZ and it’s struck by a plane. Who pays?

None of these questions, which all involve money as well as safety, are thoroughly addressed in the staff report.

Nor, indeed, is the other big money question – how to pay for the ground-side infrastructure required to sort out the transportation tangle created by the airport.

The report hints at the possibility that the city, the TPA and the federal government could negotiate some kind of quid pro quo understanding that would lead to investments in transit or road improvements in exchange for council approval for the jet service.

If council decides to ground Deluce’s jet plan, the City will likely have less leverage to extract financial contributions from Ottawa or the TPA. Adam Vaughan, however, believes the City can still pressure the Port Authority or the federal government to help pay for transportation improvements that will make the status quo airport function more efficiently as passenger volumes continue to grow.

Ultimately, the most salient question for the executive committee and council (April 1) is to ask whether there’s any point in proceeding with a tremendously costly and time-consuming assessment process that seems designed to tell us that there’s almost no way to reconcile current and future harbour uses with the proper safety requirements needed to accommodate a jet-based airport.

“If permission is granted for jets,” said Bedford, “I believe the market will prevail, and the city will lose control over decision-making on the waterfront.”