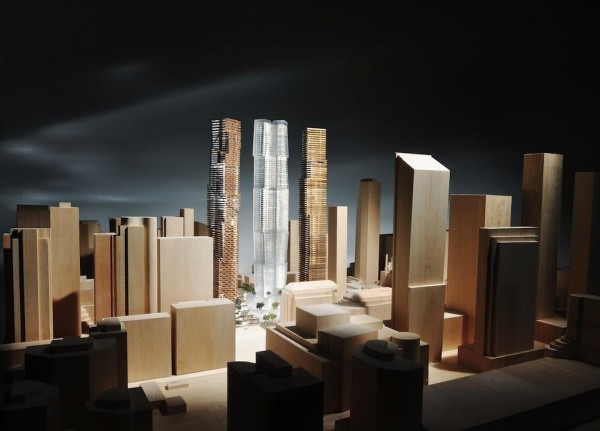 My, how things can change. With the recent announcement that Mirvish + Gehry Toronto, David Mirvish’s proposed mixed-use development under the architectural services of Frank Gehry, has been almost completely revised, it is a striking about-face that has taken place – and for the better, for Toronto’s sake.

Since I last wrote on the proposal, the project has lost a tower (for a new total of two), figured out a way to save both the Princess of Wales Theatre as well as two of the existing heritage-designated warehouse façades, and has still managed to maintain its planned addition of commercial, office, gallery, and educational spaces for OCADU. The only increase? A few more floors of condos, bringing the towers to 92 and 82 storeys respectively. But really, what’s six more floors when you’re that tall already? All-in-all, I think it’s a fair deal.

First, however, I believe it is pertinent to restate that the saving of the Princess of Wales is anything but a small victory for the collective cultural memory and life of the city. This is both an active and thriving place of performance, as well as having shared public meaning – having just celebrated its twentieth anniversary last year – and it is both great news, and really a relief, that it will be maintained. As well, the conservation of two of the four warehouses, while perhaps token façadism, is a step forward as the design plans continue to be resolved.

In my previous piece on the project, I stated, “Gehry is a great architect – there should therefore be a way for him to make an affordable, proportional and historically/culturally sensitive development that would have the potential to become a new icon for Toronto, while still being a part of existing Toronto.” And I stand by this comment now more than ever, for it appears that Gehry has proven it to be true.

But what I find most interesting is that Gehry is now apparently looking for a sense of ‘dignity’ to be the hallmark of the project. What is so intriguing about this is that, before this recent turn of events, or rather plans, the branding and promotion of the project seemed to be centred around the notion of creating an iconic architecture – perhaps not an antonym, but definitely not a synonym for dignity. For the expression of creating (as opposed to a great building becoming) an icon conjures up ideas of loud, flashy star-architecture, one meant to claim its importance to the city not through merit given, but rather from sheer volume, intensity, or abstraction.

Dignity, on the other hand, seems to allude to a sense of understanding of place, context, and appropriateness. Now this is not to say a dignified building cannot be tall, grand, or one that stands out visually from the rest, however, the word alone seems to suggest a very different direction and nuance than that of iconic. But for whatever reason that has caused this change of heart, I believe it is for the better, and in fact think that the project, if it continues to strive to build truly great architecture, may come to be known as an icon of and for Toronto after all. But this will ultimately be up to the people to decide.

For now, it appears, that the emphasis, focus, and conversation of the project has finally returned to the architecture itself, rather than a superficial notion of building an icon. And we can now begin to talk about the towers cascading like waterfalls, solid-void relationships, proportions, and relationships to the surrounding site and urban context. We can talk about materiality, texture, and light, and we can analyze how the new structure will meet the street.

For example, in terms of the current project’s urban presence, there now appears to be a well-balanced approach to the streetscape through the maintaining of the existing street edge for a large portion of the block along King Street, between John Street and Ed Mirvish Way, while the Northwest corner of King and John will see the new structures meet the ground, creating a new presence and dialogue with the city, while not completely swamping the site. These were not conversation that could be had before, but I am thankful that we have finally arrived at this point.

Mirvish + Gehry have seemingly listened to what the people of Toronto (saving both the theatre, and warehouses in part), and its city planners want (resulting in a project of a more reasonable density – but perhaps this has been seen as the compromise needed to give the project a fighting chance for approval), while still allowing for Gehry to make use to his own artistic genius. This has shown that people can advocate for their cities, architects can work creatively within this desires, and I believe we have gotten a much more elegant design proposal as a result.

We can now go back to gushing over Gehry.