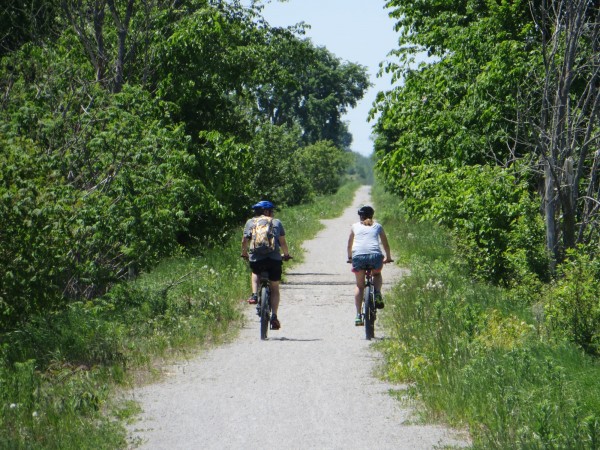 Two years ago, I wrote about a cycling day trip that I took between Uxbridge and Peterborough. I rode mostly on rail trails between the two communities, stopping in Lindsay for lunch, and I used GO Transit to get myself and my bicycle from Toronto to Uxbridge and from Peterborough to Toronto. In June this year, I retraced that route, staying in Peterborough overnight to explore that city.

There are a number of great rail trails in Southern Ontario. But with the exception of the Belt Line, there are no long-distance rail trails in Toronto so one must venture outside the city to access them.  (The West Toronto Railpath and Leaside Spur trails are short, paved routes on former rail beds, but are not long-distance routes.)

Rail trails are great for long-distance recreational cycling: they are relatively flat and separated from motorized traffic, making it comfortable to go at one’s own pace. However, most rail trails are surfaced with crushed stone dust and are not particularly well suited for road and racing bikes. Hybrid or mountain bikes are best.

In the comments to my previous article, “tim” responded that the Lake Simcoe Conservation Authority was in the process of upgrading the trail within Durham Region. This explained the unexpected trail closure I encountered in Brock Township on that ride. I am quite happy to report that the trail is now in excellent condition. The photographs below show one of the bridges in Uxbridge Township in August, 2012, before the upgrades, and the same view in June, 2014. The re-planked bridge is now level with the upgraded trail surface, and railings installed. Unfortunately, I found a car driving towards me just outside of Uxbridge; the driver was apologetic when I told her that this was a trail – she was simply unaware. Gates and signs were not yet installed at every road crossing. 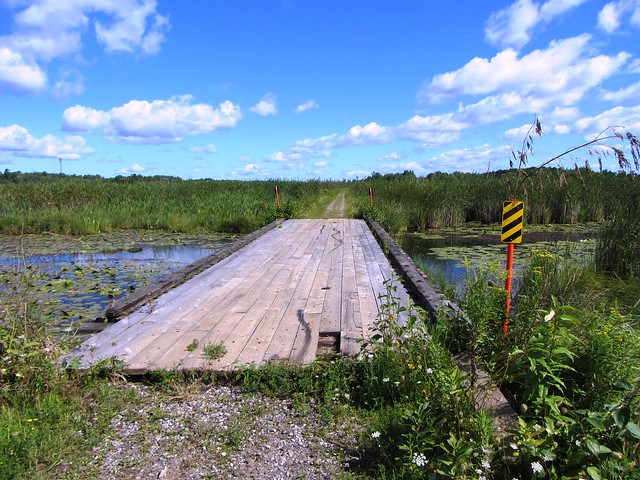 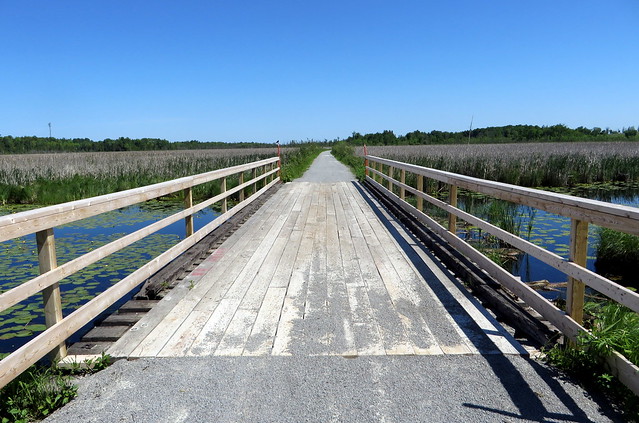 Between Uxbridge and Lindsay, the ride was pleasant, but mostly uneventful, apart from a bear sighting at the trails’ crossing of one of the concession roads Brock Township near Blackwater. It was a young cub, which likely meant that the mother was close by; I kept my distance. I’ve seen deer, beavers, hawks, and many rabbits, chipmunks and squirrels (and countless cows in farms adjoining the rail trails) but was very surprised to see this bear. The trail was in excellent condition all the way to Lindsay. 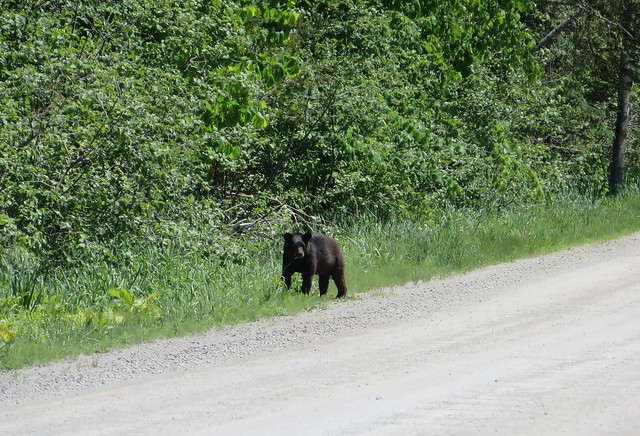 However, leaving Lindsay towards Peterborough, I found the Kawartha Rail Trail to be in poor shape almost all the way east to Omemee (the trail’s condition is much better the rest of the way to Peterborough). The crush stone surface was neglected, leaving it soft and deep and unpleasant to ride on. I felt that had to leave my feet free from the pedal clips in case my wheels got caught. As well, leaving Lindsay to reach that portion of the trail is difficult as the construction of a new subdivision closed part of the original railway alignment.

The scenic highlights between Lindsay and Peterborough are the trestle in Omemee over the Pigeon River and a high-level trestle further east, which I described in the original article. 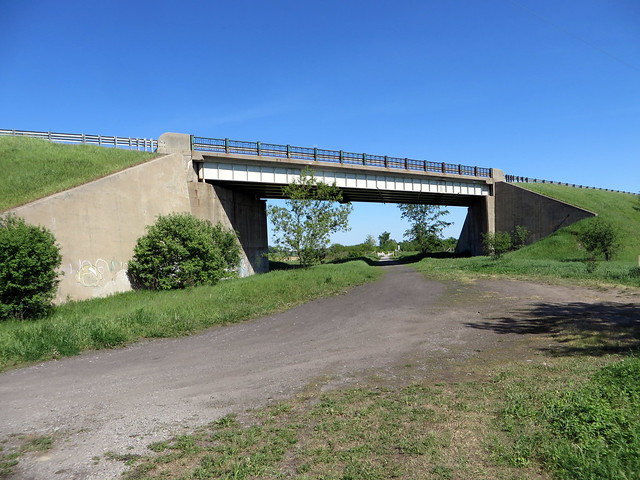 Peterborough, population 78,000, has one of Ontario’s most interesting and vibrant downtowns with many heritage buildings lining the main streets. There are many options for dinner, drinks, and yes, Sunday morning brunch. It also seemed to me to be a good city for cyclists.

The next day, I explored that city, visiting well-known landmarks such as the Lift Lock. Peterborough felt like a nice city to bike, largely because of the city’s many trails along the Otonabee River, Trent-Severn Waterway, and former rail corridors. Even on roads without cycling infrastructure,I found motorists to be friendly and conscientious.  The seven-kilometre ride from downtown to Trent University can be done almost entirely off-road. Leaving Peterborough, there are rail trails that extend to the east (to Hastings, Campbellford, and even almost as far as Belleville), to Lakefield to the north and of course, west to Lindsay and Uxbridge.

Unlike Lindsay, which lost all eight of its railway spokes radiating from the town between the 1930s and the 1990s, Peterborough still has some rail, though this is now reduced to infrequent Canadian Pacific freight trains serving the downtown Quaker Oats plant, a few other local industries and nepheline syenite mines near Havelock. Still, There’s a persistent dream of restoring passenger rail service from Peterborough to Toronto; VIA Rail service between Havelock and Toronto ceased in 1990. 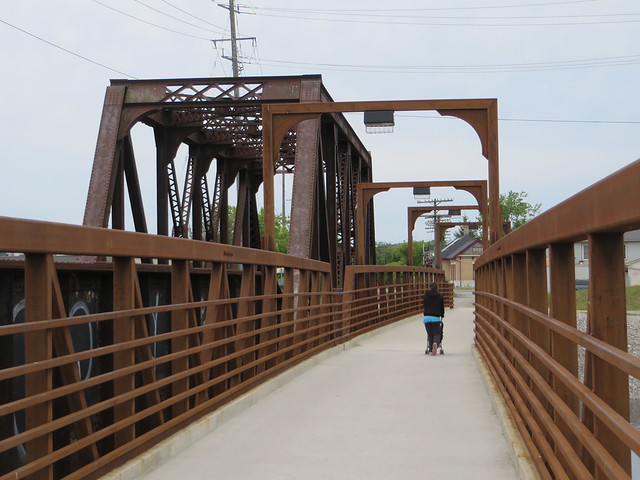 In town, the network of multi-use paths are excellent, with good wayfinding signage and easy road crossings. The route to Trent University, a former railway to the nearby village of Lakefield, has some interesting sights along the way; the trail deviates from the rail corridor to cross the Trent-Severn canal at a new high-level bridge, offering interesting views of an abandoned railway swing bridge and Trent University’s main campus. 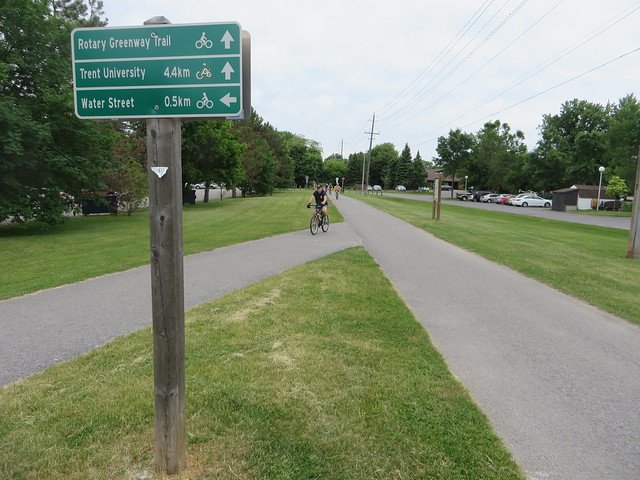 Riding north on the former railway line to Lakefield 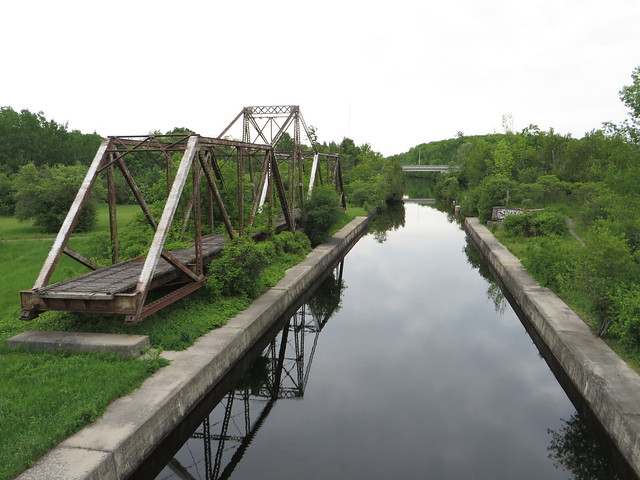 North of Trent University, the Lakefield Rail Trail continues to its namesake village. I completed the rest of that trail before returning  to an empty Trent University campus. Trent’s setting on the Otonabee River is gorgeous, and the brutalist architecture fits in its surroundings. I ended my ride at that point and wandered the deserted campus – a surreal experience – before taking the GO bus back to Oshawa Station and the train home to Toronto. 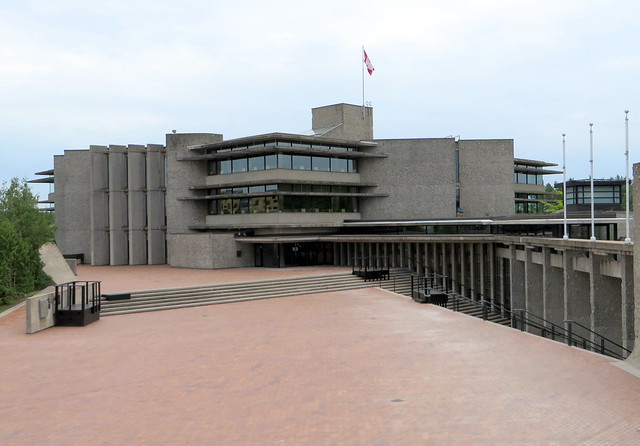 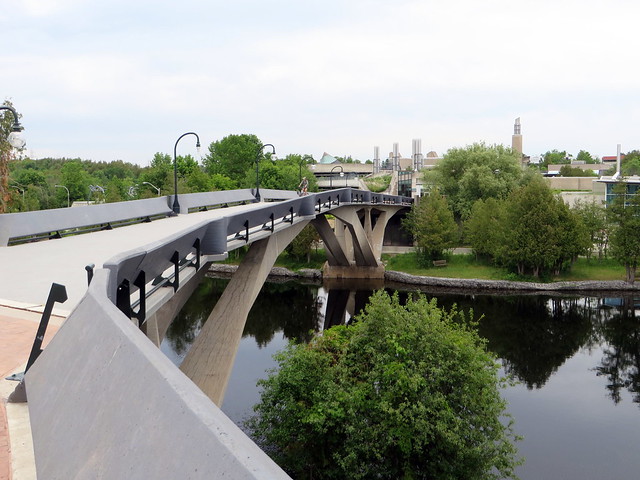