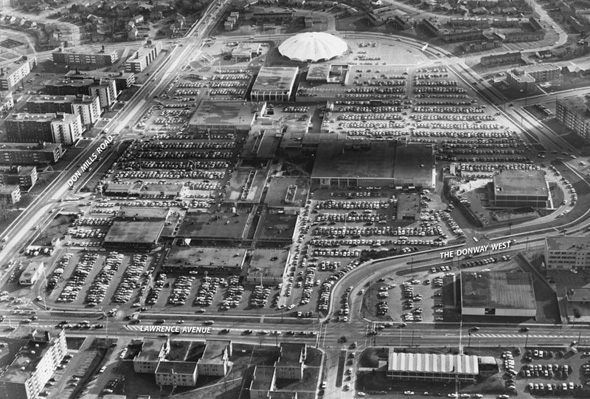 In aerial photos from the 1960s and 70s, the Don Mills Curling Rink looks like an bright white spaceship at the corner of Don Mills and The Donway, a glorious modernist centrepiece to an unprecedented modernist community.

Don Mills was North America’s largest planned satellite town of the post-war era. In the boom years of the 1950s, 850 hectares of Don Valley farm land was transformed into a meticulously crafted town of cul-de-sacs, detached family homes, and apartment blocks, all of it neatly arranged around a central commercial core.

There was a strip mall and other sports facilities, but nothing that looked remotely like the Don Mills Curling Rink.

The domed, wood-framed structure was the work of architect Douglas M. Hall. He called it “a flower at the end of the long stem of buildings,” referring the original Don Mills shopping centre. Its eight wooden support arches merged into a crown 16 metres above the ground, giving the roof a deeply ridged texture. “Anything that approaches nature is fundamentally good mathematics,” Hall told The Don Mills Mirror.

The distinctive building ― also described as “a big, bright concrete mushroom” ― opened in September 1960. Its facilities, which included 12 sheets of ice, a lounge, restaurant, and pro shop, were open to members of the private Parkway Curling Club, one of about 22 curling clubs established in Toronto between 1955 and 1970, a boom period for the sport.

Pay-as-you-play and league teams had separate facilities, including a snack bar and a free babysitting centre with a window that overlooked the playing surface. Three minders cooed over kids while their mothers threw rocks and socialized.

Parkway manager and resident pro Alfie Phillips, Jr., a member of both the Canadian national and world championship winning teams in 1967, was in charge during the halcyon days of the mid-60s, but his departure for rival Tam-Heather in 1967 and increasing competition from new clubs had a “drastic effect” on the young club’s finances.

Nearby, the Avonlea Curling Club and Donalda Club — both of which opened after the Don Mills rink — offered members a variety of diversions, such as swimming, squash, tennis and golf when the weather was right, and banquet dining and snug bars when it wasn’t.

Membership halved at Parkway in the wake of local competition, and the club folded in 1970. “We’re going out of the curling business,” president Al Buckingham told the Toronto Star. The club was the fourth to close in two years, but there were still 22 operating in Metropolitan Toronto. “We’ll rent [the building] out for various functions, bingo, dancing, and the like.” 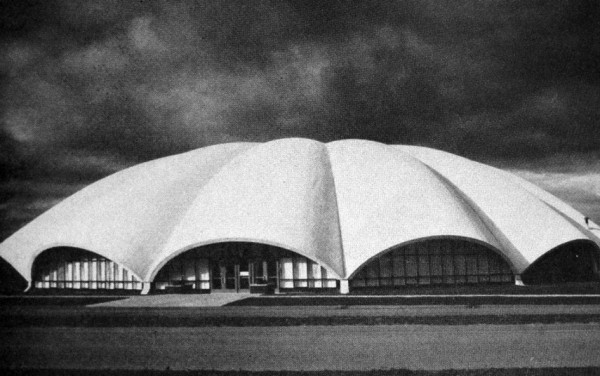 Rather than return to sport, Cadillac Fairview, the building’s owners, turned the building into a bingo emporium. Lotteries had just been legalized in Ontario, and reports predicted the new laws would provide crucial new revenue for struggling entertainment venues.

After mandatory fire code renovations, the Don Mills dome ― rebranded as the Don Mills Recreation Centre ― had room for more than 1,800 players. Promoters promised jackpots of between three and five thousand dollars, TTC charter bus service to the door, a snack bar, and air conditioning. “BINGO!!,” yelled the ad copy. “Meet you under the dome” was the club slogan.

Toronto Star reporter Earl McRae captured the scene inside the bingo hall for a feature in 1971: “They pound off the bus, the young, old and middle-aged, and charge for the doors dodging an impatient stream of cars and taxis swinging in off the street.”

“Inside, hundreds are milling and, while they wait, they smoke or eat sandwiches and hot dogs and the heavy haze of cigarette smoke hanging beneath the white lights is already hurting the eyes and nostrils.”

Like the curling club before it, the bingo concept was a short-lived success at Don Mills. Crowds of some 1,500 to 2,000 people visited six nights a week at its zenith and the business bumped along through the 1970s before financial troubles once again began to surface.

When the bingo hall shut down in 1984, manager Jack Weinstaff blamed competition from “glitzy TV lotteries” and other facilities closer to the subway. He said just 700 people were routinely attending games close to the end.

“It’s very hard on the heart, because we made a lot of friends,” Weinstaff told The Star. “There’d be a major storm and we’d still have 200 to 300 people out. One time I thought we’d close, but they showed up at the doors and wouldn’t go home.”

Some residents of Burdock Lane, a nearby cul-de-sac, were happy to see the hall close. They said the noise and traffic hurt the area.

“I am sorry for what the community will be losing, but frankly, I’m delighted it’s closing,” said Mary Leeder, a neighbour.

The vacant dome lingered until 1986, when it was replaced by a strip mall. That too was demolished in 2013 to make way for a temporary park, which is still under construction. Cadillac Fairview is expected to build a condominium on the site in the next few years.