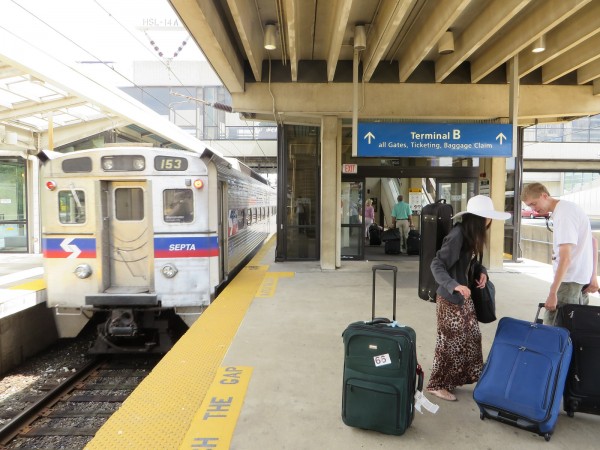 EDITOR’S NOTE: This post is intended as a follow up to Glyn Bowerman’s commentary from yesterday on the high fares planned for the Union-Pearson Express.

Two weeks ago, I visited Philadelphia, the last stop on a three-city trip that also included Charleston and Savannah. After two-and-a-half days of sightseeing (mostly by foot or by bike, though I indulged in a ride on Philadelphia’s refurbished PCC streetcars), I walked with by bags from my Center City (Philly-speak for downtown) hotel to Market East rail station and bought a $6.50 ticket to ride on one of America’s best downtown-to-airport rail links. After boarding the train, I was at the TSA security check in just over 30 minutes.

Philadelphia’s Airport Line, operated by the Southeastern Pennsylvania Transportation Authority (SEPTA), is one of operating 20 airport rail links in the United States, but the only one utilizing regular regional/commuter rail trains connected to the airport terminals. This is also the model of service that Denver, Colorado is planning for its East Rail Line, an electric regional rail line due to open in 2016. (Providence, Rhode Island, Burbank, California, and South Bend, Indiana have commuter/regional rail links to their airports, but services there are much less frequent than SEPTA’s.)

I wrote about SEPTA after my first visit to Philadelphia five years ago. Philly’s transit agency operates buses, trolley buses, streetcars, suburban light rail, subways, and regional rail throughout Philadelphia and its suburbs. It even has a transit gift shop. All that said, SEPTA is underfunded, and neglects much of its older infrastructure, including several streetcar lines left idle for decades. It hasn’t built any major new transit infrastructure since 1985. But there are still a few things Toronto can learn from the City of Brotherly Love.

Like all of SEPTA’s regional rail lines, the Airport Line uses electric multiple unit trainsets. Trains operate every 30 minutes, 7 days a week, from early mornings until about midnight. Airport Line trains originate at Temple University, in Philadelphia’s near north end and serve three central stations — Market East, Suburban Station and 30th Street Station — via the Center City Commuter Connection, a four-track rail tunnel completed in 1984. 30th Street Station is the main Amtrak station serving Philadelphia. From 30th Street, the line continues south, stopping at University City (serving University of Pennsylvania, Drexel University and a large medical campus) and at Eastwick, a neighbourhood near the airport. All stations on the Airport Line (unlike most regional rail stations) feature high platforms, a useful feature when lugging bags or pushing strollers. There are four stops at the airport, making it a very short walk from the train platform, up the escalator or elevator to the right check-in counters and security inspection stations. From Suburban Station (which despite its name, serves Philly’s financial district), it takes 19 to 24 minutes to arrive at the airport, on a 16-kilometre (10 mile) long route. In comparison, the Union Pearson rail link will be 23 kilometres (14.5 miles) in length.

Philadelphia’s rail link is also affordable for airport workers, a market the Union Pearson Express ignores. Weekly and monthly SEPTA passes (an adult weekly pass is $24; a monthly pass is $91) are permitted for travel on the Airport Line (unlike other SEPTA regional rail lines, which require additional fares or more expensive passes) between Center City and the Airport. 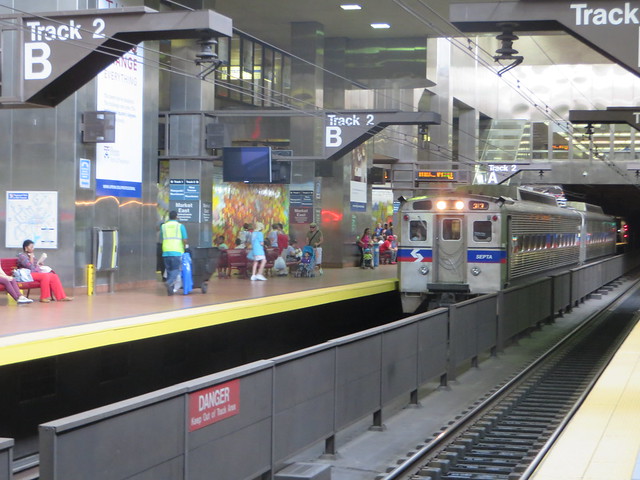 So why didn’t Toronto choose to go with the Philadelphia model for building an airport rail link?

With the exception of transit across the Delaware River to Camden, New Jersey and its suburbs, SEPTA is the sole provider of transit services in the Philadelphia metropolitan area, including regional rail services. Fare integration between different nodes was easier to implement. SEPTA already owned and operated an extensive electrified rail system, the legacy of the old Pennsylvania and Reading Railroad networks, while GO Transit/Metrolinx had to build a commuter rail system from scratch starting in 1967, using longer, diesel-powered trainsets. Unlike SEPTA, GO offers off-peak regional rail services only on two corridors (Lakeshore East and West). In Toronto, transit is provided by the local municipalities and by GO Transit, and there is little, if any, coordination between them. There is a lack fare integration between GO Transit, the TTC, and suburban transit agencies.

But the biggest problem is that the Union-Pearson Express, first conceived by Federal Minister of Transportation David Collenette in 2001 as “Blue 22”, was always planned as a public-private partnership that was geared towards business travellers, not the general public. Metrolinx, the provincial agency now responsible for the Union-Pearson Express, has chosen to implement the Blue 22 model, even though its own mandate is “to improve the coordination and integration of all modes of transportation in the Greater Toronto and Hamilton Area.” The Union-Pearson Express’ premium service model seems be counter to that basic mandate. Denver is building a new electric airport rail link from scratch (as part of a very ambitious FasTracks program), but has chosen to operate it as part of its transit system, like Philadelphia. It’s too bad Toronto isn’t doing the same.