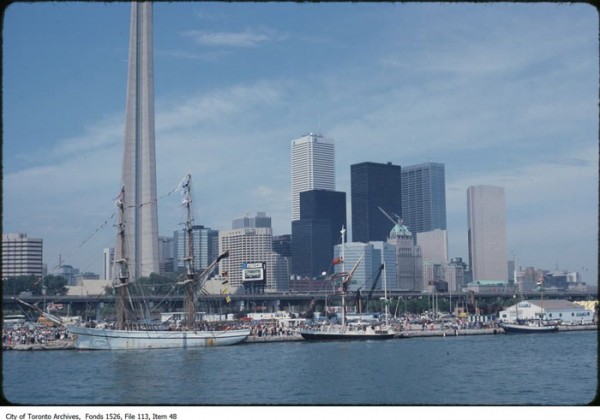 There was a time when observation decks were all the rage in Toronto. The designers and developers of tall buildings like TD Centre, Commerce Court, and City Hall, keen to show off their creations to the public, installed top floor public viewing galleries with panoramic views of the city. One had a restaurant, another doubled as an art gallery, a third had an aviary.

These early privately-owned public spaces (POPS) gave many people their first chance to look down on the city from above. They were popular, too. About a million people visited the observation floor at the top of TD Centre every year. That was until the CN Tower showed up and spoiled the party in 1976. 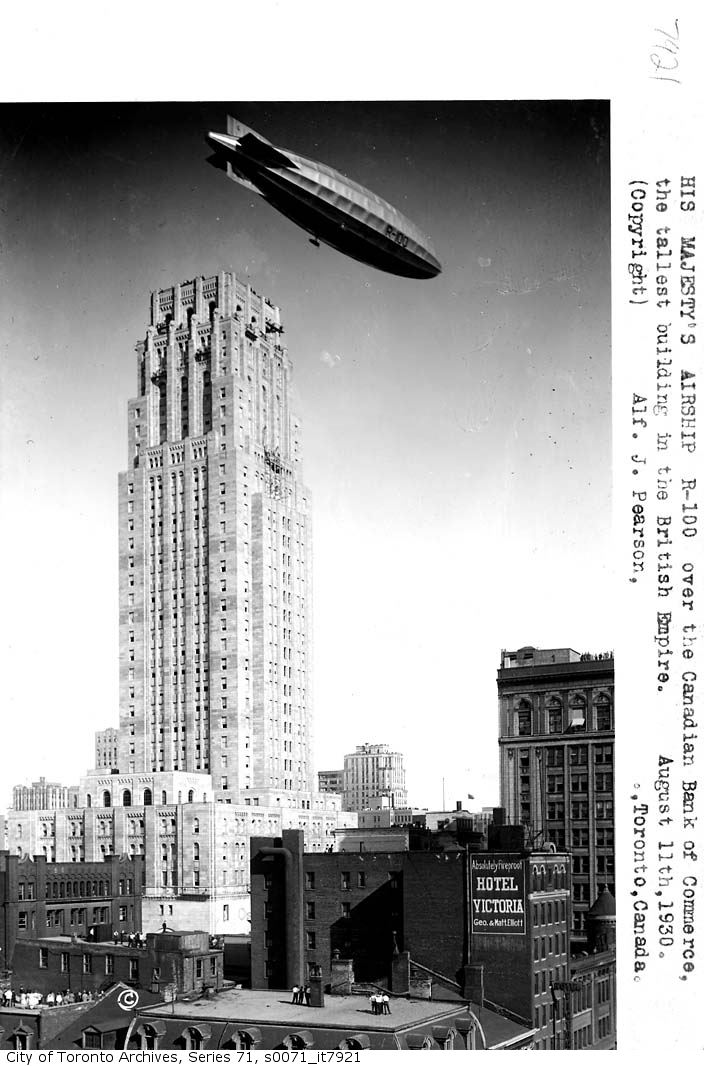 One of the oldest and best-known closed observation decks in Toronto sits atop the original Commerce Court tower at King and Bay. When the building was completed in 1931, it was the tallest building in the British Empire. Crowds of people gathered on the unfinished roof in 1930 to watch the R100 dirigible balloon―the pride of Great Britain’s budding Imperial Airship Scheme―glide silently over Toronto.

Today, the tower is easy to miss among the city’s taller skyscrapers, but the exquisite detail of the roof was always meant to be seen up close. Massive carved heads, representing courage, foresight, observation, and enterprise, still peer out from the thirty-second floor observation balcony, though the visitors are long gone. The deck, which doesn’t have a safety railing, is too dangerous, the building’s owners say.

The 1972 addition to Commerce Court was built with an observation level, too. The 57-floor International Style Bay Street building robbed the complex’s original tower of its downtown view and trumped it for height. When it opened the new tower was the tallest in Toronto, beating neighbouring TD Centre by about 17 metres.

The indoor observation area was carpeted and contained a small collection of tropical birds. Serene music accompanied the unobstructed panoramic views of the city, lake, and surrounding cities. CIBC charged visitors 50 cents entry in 1975 and the room was open until 10 p.m.

The lookout at TD Centre, completed a few years earlier, was slightly closer to the ground, but charged the same prices (the building’s owners even minted tokens.) Instead of an aviary, the bank enticed guests with a selection of “Eskimo art” from the company’s private collection. Office workers who brought a packed lunch were given half price admission. 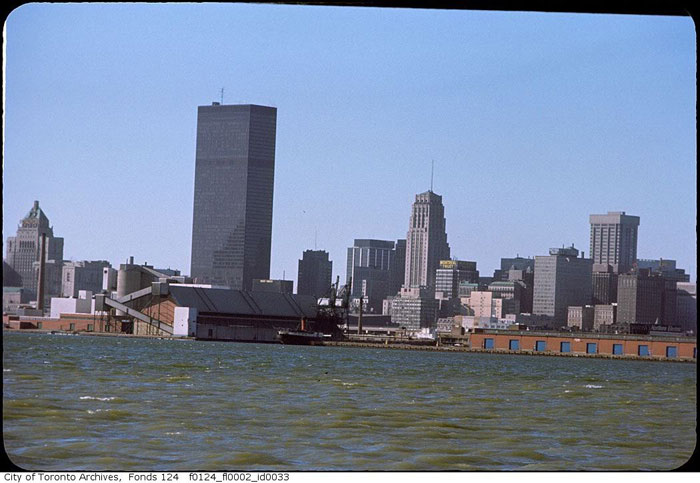 Prior to the completion of the CN Tower, City Hall was another popular place to catch a view of Toronto from above. At the top of the east tower, where city alderman Joseph Piccininni had envisioned a restaurant after visiting a popular eatery atop the Prudential building in Chicago, architects installed a public viewing platform.

(Piccininni’s restaurant idea was shelved when it was discovered adding a top-floor eatery would add $1 million to the cost of City Hall.)

The outdoor area, which opened in April 1966, proved so popular that the bank of six elevators serving the east tower was frequently jammed with scouts, school kids, and tourists on tours of the building led by uniformed guides.

“It’s a tremendous thing so many people want to see city hall,” property commissioner Harry Rogers told the Toronto Daily Star in April 1968. “We are not annoyed about it at all.” The sentiment wouldn’t last.

Elsewhere in Toronto there were observation levels at the Manulife Centre at Bay and Bloor streets and on top of the parking garage at the Toronto airport. In simpler times, people were given unobstructed views of the runway and terminal. Some came to greet arriving celebrities, others just watched the planes come and go.

The are many reasons why Toronto lost its downtown observation areas. The top-floor spaces were expensive to maintain, especially when installed at the expense of office space. There were also security concerns for the managers of outdoor balconies. In July 1970, despite a safety mesh, 36-year-old university library clerk Himani Ghosh jumped to her death from the Peace Tower at the Parliament Buildings in Ottawa. 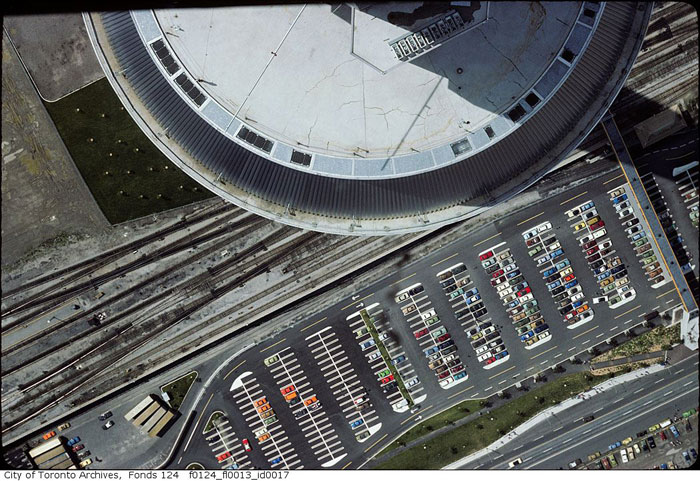 As it was originally laid out, the massive finger to the sky had three lookout levels: an outdoor terrace just above the white donut-shaped radome, the main indoor level, and the upper Space Deck (now the “SkyPod,”) each one providing unprecedented views of the city.

At 342 metres above ground, even the lower level was more than a 100 metres higher than its closest competitor at Commerce Court.

In April 1977, barely six months after the opening of the CN Tower, TD Centre closed its observation floor, blaming a lack of visitors. A spokesman said the numbers had fallen by two thirds.

10 million people visited the top floor of TD Centre in the decade it was open, including one elderly man who came every day, the Star reported, though it didn’t give his name. The bank gave him a lifetime pass and he acted as an unofficial tour guide, pointing out landmarks to visitors until his death shortly before the closure.

The $750,000 collection of First Nations carvings, prints, and tapestries that lined the walls were placed in storage and the space converted into offices for Cadillac-Fairview, the building’s owners, and a dining room for lunching TD staff.

Things weren’t going much better at Commerce Court. CIBC closed its offering four months after TD and donated its collection of exotic birds to the Toronto Zoo.

“Some of the canaries clung grimly to branches and had to be shaken off. Other birds dug their sharp claws into the hands of captors,” wrote Star reporter Victoria Stevens, who was present when zoo keepers cleared the walk-in, glass-fronted cages.

By 1979, two years after TD Centre and Commerce Court ditched their public viewing spaces, the mood had soured at City Hall. The observation deck was costing the city $20,000 a year and staffers were no longer happy to share the elevators with tourists. About 100,000 people were visiting every year, the Globe and Mail reported.

“It’s silly for a 25-storey building to have an observation deck,” said new property commissioner Graham Emslie, who admitted he’d never been up to the roof for a peek. “Who wants to look around in the middle of those tall buildings?”

Elmslie said city staff were struggling to return from their coffee breaks on time because of the crowding. 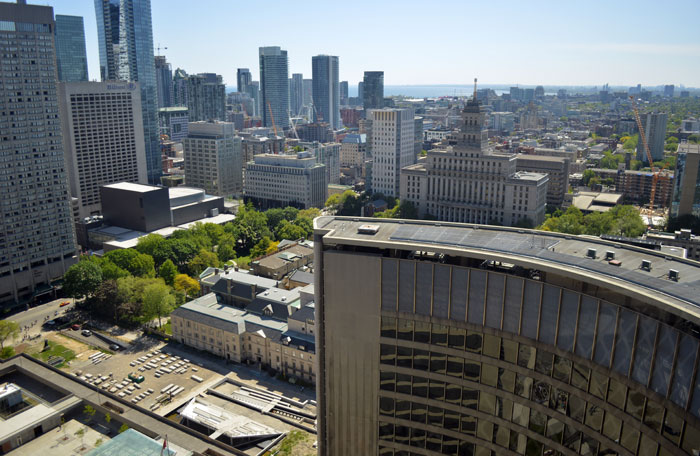 Today, the roof of City Hall is only open during the annual Doors Open festival, which is particularly egregious given that the building is public property.

Toronto Star columnist Christopher Hume said it best in 2009 when he wrote that the shuttering of the deck sends a negative message to the people of Toronto:

“With the deck closed, the message is clear; you’re welcome here if you want to pay your taxes, get a dog licence, secure a building permit and so on. But to go to experience the building, the great architectural expression of who we are, is no longer possible.”

The owners of Commerce Court say their outdoor space is too dangerous reopen to the public in its current form, and that alterations are not possible because of the building’s heritage status, an assertion Hume says is false.

Regardless of the real reasons, don’t expect a return to the observation deck heyday of the 1960s.

In the meantime, get your altitude fix at the CN Tower.

Alternatively, the top floor restaurant at the Manulife Centre is still open.