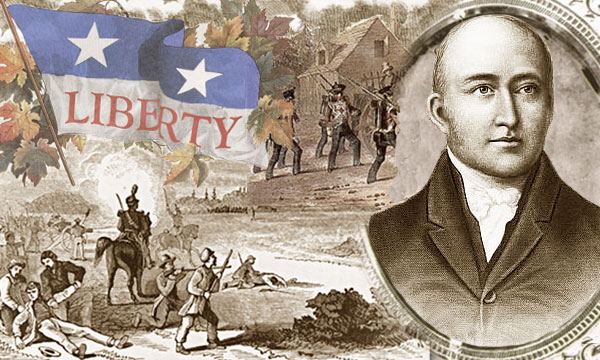 There’s a small town on the very western edge of England, not far from the River Severn, which marks the border with Wales. It’s called Thornbury. It’s a lovely place; the High Street is lined with flowers, filled with shoppers, and draped in bunting and flags. There’s a lot of history, too. Thornbury is where they found one of the biggest hoards of Roman coins ever discovered in Britain. There’s a church from the 1100s. And right next door to that is the 500 year-old Thornbury Castle, where King Henry VIII once stayed with Anne Boleyn after beheading the original owner for treason.

But Thornbury also has a connection to the history of Toronto. It’s the town where John Rolph was born. And for a few brief days during the winter of 1837, it looked like John Rolph might end up being the very first Canadian President.

The Rolphs were one of the most important families in Thornbury — a line of lawyers and doctors and landlords who owned a bunch of the buildings in town. John Rolph was the son of a surgeon; he was christened in that ancient church and grew up in the late 1700s with 17 brothers and sisters. In the early 1800s, his family moved to Canada. And as soon as he was done school, the young Rolph joined them. Eventually, he’d follow in the footsteps of his father and his grandfather, becoming one of the most respected doctors and lawyers in Upper Canada. He even co-founded our very first medical school.

But it’s his politics we remember him for. By the time he was in his early 30s, Rolph was one of the leading Reformers in the province. He fought in favour of democratic reform, equal rights for American-born citizens and the separation of church and state.

It was a bitter fight. These were the days when the Lieutenant Governor could pretty much ignore the elected assembly whenever he wanted. He was backed by the most powerful people in Upper Canada: the Tories of the Family Compact, who loved Britain, hated democracy, and could usually count on the Governors to give them what they wanted. People who spoke out in favour of reform tended to get arrested, exiled, or attacked by angry Tory mobs.

Still, in the 1830s, it looked like things might finally change. The Tories back home in England had lost power for the first time in decades; now the left-leaning Whigs were in charge. They sent a brand new Lieutenant Governor to Toronto: Sir Francis Bond Head. He was supposed to be a big supporter of reform. And at first, that seemed to be true. His very first act was to appoint some big-name Reformers to his Executive Council — including John Rolph.

But Bond Head wasn’t a Reformer at all. The Whigs had screwed up. To this day, there are people who think they must have confused him with his cousin and appointed the wrong guy. The new Lieutenant Governor wasn’t planning on listening to his Executive Council. In fact, he praised the Family Compact for their “industry and intelligence” while dismissing the famous Reform leader — and former mayor of Toronto — William Lyon Mackenzie as “an unprincipled, vagrant grievance-monger”.

It took only three weeks for the Executive Council to get sick of being ignored. They all resigned in protest — even the Tories. And the Legislative Assembly backed them up, refusing to pass any bills that had anything to do with money until Bond Head gave them an explanation.

He refused. Instead, he dissolved the legislature and called an election. Then, he openly campaigned for the Tories in what proved to be one of the most corrupt elections in Canadian history. There were bribes and threats and riots. Polling stations were placed in Tory neighbourhoods; returning officers were handpicked for their conservative sympathies. Bond Head — who was supposed to be neutral — called the election a battle between “the [Tory] forces of loyalty, order, and prosperity” and the “selfish and disloyal” Reformers. The Tories won in a landslide.

For some, like Mackenzie, it was the last straw. And Rolph agreed.

The two men hadn’t always worked well together. Mackenzie was a radical; Rolph was a moderate. In fact, a few years earlier, when Toronto officially became a city, the choice for the first Mayor came down to Mackenzie and Rolph. When the council picked Mackenzie, Rolph resigned his seat in protest and retired from municipal politics. For a couple of years, he stayed out of politics entirely — focusing on his medical practice instead — until Bond Head offered him the seat on the Executive Council.

But now Bond Head’s decisions were beginning to make Rolph more radical. He’d won a seat in the corrupt election — and with Mackenzie defeated, he was essentially the leader of the party — but he was outraged at the way it was run. In a letter to a fellow Reformer, Rolph denounced the “violence, bribery and corruption” of the election, the “malicious official misrepresentation, and ultra tory returning officers…”

“[T]here is not,” he wrote, “a baser or more unprincipled government in the world than the one we are now enduring here…”

And while Rolph was hard at work opposing the government in the legislature, Mackenzie was hard at work on a plan to overthrow the government entirely. He travelled across the province, giving speeches, building support, arguing in favour of armed revolution. He wrote a declaration of independence, published a new constitution and called on citizens to rise up against their colonial overlords. “Canadians,” he wrote, “Do you love freedom? … Do you hate oppression? … Then buckle on your armour, and put down the villains who oppress and enslave your country… Up then brave Canadians. Ready your rifles and make short work of it.”

Many Canadians answered Mackenzie’s call to arms. And not just in Upper Canada. Similar things had been happening in Lower Canada (Québec). In early November, the Patriote rebels launched their own rebellion. And for a while, it looked like they might just win. Scared, the government there asked Bond Head for help — and he responded by sending every single soldier in Upper Canada. Toronto was left almost completely undefended.

Mackenzie seized his opportunity. In early December, his army of volunteers assembled at Montgomery’s Tavern on Yonge Street just north of Eglinton. By then, he had already started to plan for what would happen if his revolution were successful. There would need to be a temporary government until elections could be held. And since he was looking to establish a republic  — something like the one in the United States — that government would have a temporary President. Someone, preferably, respected by both sides. Someone like John Rolph.

Rolph, it seems, agreed to the plan. If the rebels seized power, the doctor from Thornbury would become the very first Canadian President.

They kept Rolph’s involvement a secret. While Mackenzie prepared to march his army down Yonge Street, Rolph stayed in the city and fed the rebels information about the government’s plans. Bond Head was refusing to take the threat seriously, but Colonel James FitzGibbon — a hero of the War of 1812; the guy Laura Secord ran to warn — ignored his orders and prepared the city’s defenses anyway. In response, Rolph convinced the rebels to move the date of the revolution ahead by a few days.

But that just confused things. Mackenzie wasn’t there when the decision was made; he was away getting more recruits. When he got back, he was furious. In the end, it seems that Rolph and Mackenzie met in secret and hashed things out: the revolution would begin two days earlier than originally planned. But that meant there wasn’t enough time for everyone to get there. When Mackenzie’s army marched down Yonge Street, it wasn’t as big as they’d originally hoped.

By then, the bloodshed had already started. The night before the march, the rebels shot and killed a Tory who tried to ride through their checkpoint. They also captured a Tory judge who shot and killed one of the rebels and escaped to warn the Lieutenant Governor. While a panicky Bond Head rushed to get his family on a steamship out of town, Colonel FitzGibbon continued to take charge. By morning, the bells of Toronto were ringing. Hundreds of volunteers raced to defend City Hall and the Parliament Buildings.

That’s when Bond Head turned to John Rolph for help.

While Mackenzie’s army advanced down Yonge Street, Bond Head tried to stall. He decided to send emissaries north to meet with Mackenzie and suggest a truce. But it wasn’t easy finding someone to send. He needed men that he trusted, but who weren’t Tories — otherwise, the rebels might just shoot them. So he asked the same moderate Reformers he’d once appointed to his Executive Council: Baldwin and Rolph. He had no clue that Rolph was secretly working for the rebels.

The messengers found Mackenzie at Yonge and St. Clair, where his army had stopped to rest. And while Baldwin delivered Bond Head’s message, it seems that Rolph pulled Mackenzie aside. According to some reports, he told the rebel leader to hurry the hell up.

In the end, of course, it didn’t matter. It was dusk by the time Mackenzie’s men got down to Yonge and College, where they finally faced off against the government’s defenders. There was a confusing skirmish. As shots were fired, both sides broke ranks and fled. They say if the rebels had pushed on into the city, they might have been able to take Toronto that night. But now, they’d lost their chance. The next day, government reinforcements flooded in from Hamilton, Pickering, Niagara, Peel… Rolph could see the cause was lost. Mackenzie’s army was going to be defeated. So Rolph casually walked to the edge of town, mounted a horse and then rode like the wind for the American border.

He would spend the next few years in exile. Bond Head offered a £500 reward for Rolph’s capture. The Lieutenant Governor denounced him as the “most crafty, the most bloodthirsty, the most treacherous, the most cowardly, and . . . the most infamous of the traitors…”

But times were changing. Before long, the Whigs had replaced Bond Head. The Reformers had swept back into power in the legislature. Rolph was pardoned and allowed to return home to Toronto. He even got back into politics, getting re-elected to the assembly and becoming a leader of the radical faction of Reformers: the Clear Grits. Over the next couple of decades, his power and influence would gradually fade. But he would still live to see some of his dreams become a reality. In 1849, a Reform government brought Responsible Government to Canada along with many of the democratic reforms Rolph had fought so hard for. And as an old man in 1867, he watched Canada become its own nation. We might not have had our first President, but we did have our first Prime Minster.

A version of this post originally appeared on the The Toronto Dreams Project Historical Ephemera Blog as part of the Dreams Project’s tour tracing the history of Toronto in the UK. You can find more sources, photos, links and related stories there.

Image: John Rolph with William Lyon Mackenzie’s flag for the Republic of Canada and scenes from the Rebellion of 1837.