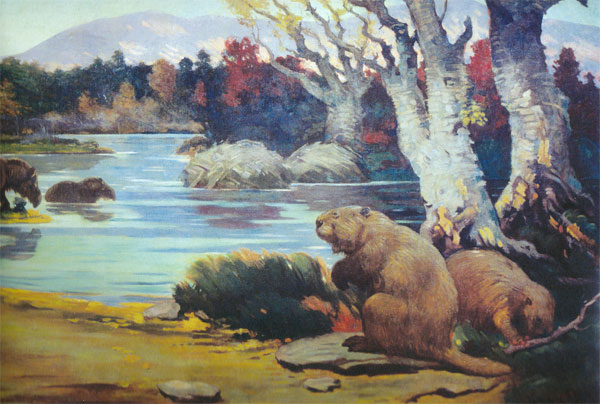 Meet the giant beaver. It’s one of the largest rodents to have ever walked the earth: as much as seven feet long and more than 200 pounds. So, like, the size of a black bear. Its teeth were six inches long, but scientists aren’t sure if they were used to chop down trees like beavers do today; giant beavers probably ate aquatic plants, and there’s no evidence they built giant dams either. Their tails were probably quite different from their modern cousins, too: longer and thinner. And they had shaggier hair.

They also used to live in Toronto — about 130,000 years before our modern city was founded.

The first scientist to discover them here was Toronto’s most famous and celebrated geologist: Arthur Philemon Coleman. In the late 1800s, he became the first geologist to realize the importance of the big cliff on the northern end of the Don Valley Brick Works. At the bottom of the cliff was a bedrock of slate from about 450 million years ago — littered with fossils from the days when this part of the world was a tropical sea filled with trilobites. But what really makes the cliff special is what Coleman found above that slate: a remarkably complete geological record of the last 135,000 years.

Layer by layer, the exposed earth shows the last two Ice Ages coming and going, leaving rocks and dirt and boulders behind as enormous glaciers covered this land in ice and then melted away as the climate changed again. It’s the only place in this part of the world where you can see all of that history laid out in front of you. And in between those two Ice Age layers, there are a bunch of other layers: from a time when the planet was warmer. One of them, near the bottom, is a layer of sand and clay from about 130,000 years ago. That’s where A.P. Coleman found the giant tooth of a giant beaver.

Back in our giant beaver days, Toronto was actually a couple of degrees warmer than it is now. Instead of Lake Ontario, there was an even bigger and deeper lake here; they call it Lake Coleman in honour of the moustachioed geologist. Everything that now sits in downtown T.O. was very much underwater back then. The sands and clays at the foot of the cliff in the Brick Works — which is all the way north of Bloor — would have been in the shallow waters near shore, at the mouth of the prehistoric ancestor to the Don River.

Coleman and his team were able to piece together a whole scene thanks to the other fossils they found along with the beaver tooth. The area where the river met the lake was a marshy wetland back then, surrounded by woods and grasslands. Prehistoric stag-moose, bigger even than moose are today, with huge sets of antlers, roamed through a wilderness that would have seemed both familiar and strange to us. There were plenty of trees and other plants that still grow in Toronto today: oaks and pines and maples, willows, cedars and elms. But there were also some species that you can only find further to the south these days — in the United States, where it’s warmer — as well as a few that are long-extinct. There were giant prehistoric bears here, too. Massive, ancient bison. Woodchucks and white-tailed deer. On occasion, a thunderstorm sparked a fire, flames tearing through forests and fields, enormous panicked beasts rushing for the safety of the water.

Scientists figure that giant beavers didn’t spend much of their time on land; even less, it seems, than beavers do today. They stuck to the swamp at the mouth of the river, swimming through the marsh, feeding on the aquatic reeds and long grasses that lined the shore. (And if they did behave like their modern relatives, maybe they were even cutting down trees and building beaver lodges big enough to house a family of rodents the size of a bear.) They’d been living like this, in the wetlands of North America, for two million years. And they had more than another hundred thousand years left to go.

But not in Toronto. As the next Ice Age began, Toronto got colder, eventually getting buried beneath a layer of ice two kilometers thick. The giant beavers would have been forced far to the south. And as the Ice Age ended, around 10,000 B.C. or so, the last members of the species died out. The giant beaver was extinct.

By then, a new species was living in North America: human beings. Back in the days when giant beavers had been swimming around the Don Valley, humans were still a young species, having only recently evolved on the savannas of Africa. But by the time the giant beavers went extinct, indigenous peoples had established cultures and communities all over the Americas — soon to become civilizations. The First Nations and their ancestors have been living in Toronto for thousands and thousands of years. But it was only a few hundred years ago that the first Europeans showed up. And when they did, many of them came looking for the smaller, modern relatives of those prehistoric beavers — so they could turn these new beavers into hats.

Finally, just a little more than 200 years ago, the British founded a new capital on this spot. To build it, they needed bricks. To make bricks, they needed clay. And one of the best sources for clay was discovered in the very same place where that prehistoric river once met that prehistoric lake. The Don Valley Brick Works was born, turning clay into red and yellow bricks of such a high quality that they won gold medals at the Chicago World’s Fair. A lot of Toronto’s old buildings are made of Brick Works bricks. Much of our city was quite literally built from the mud of the swamp where giant beavers once roamed.

Today, the Brick Works is no longer an industrial wasteland. Instead, we’ve tried to return it to its roots: a mixture of wetlands, forests and fields. Native species of plants and animals have been reintroduced and allowed to thrive — some of them are the very same species that would have been here in the days of the giant beaver. In fact, if you get lucky, you might even spot one of the newest residents: a modern, normal-sized beaver, swimming around the wetland where 130,000 years ago its giant beaver cousins did the very same thing.