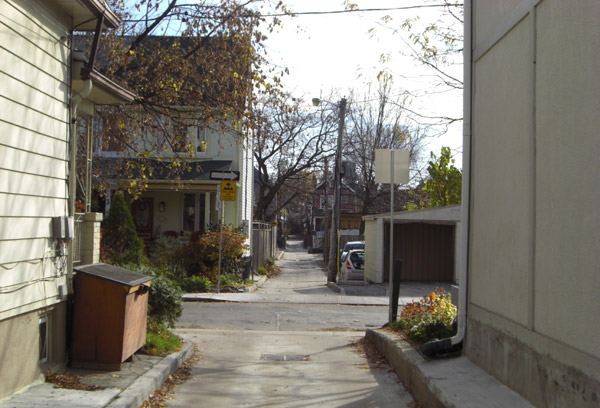 Last week, I was part of a panel discussion about the potential of Toronto’s laneways, organized by The Laneways Project.

I talked about the way laneways work as a kind of shared street — a space where walkers, cyclists and cars all share the same space and work around each other. We tend to think of shared streets as a foreign, European concept that we don’t really have in Toronto. There’s some excitement when it looks like we might get one. Sometimes people also express concern as to whether we North Americans, so used to strict separation of uses, could adapt easily to them.

But at the event I suggested that, in laneways, Toronto has had shared spaces for a long time, and through them, many of us are in fact quite used to sharing. The image above is of a narrow laneway near my home, and it’s used by people in cars, on bikes and on foot, including students walking to the nearby school. We negotiate the space instinctively. Cars aren’t that frequent, and they tend to move slowly. When a car comes through, people on foot or bike stand aside if there is space, and if there isn’t space, the car waits for them to get by. Laneways are also used across the city for children’s games such as street hockey — one of the goals of residential shared streets such as woonerfs in the Netherlands.

Laneways are not ideal as shared streets, certainly, and some enhancement might be welcome. Fellow panelists, landscape architect Victoria Taylor and landscaper Jonas Spring, talked about an intriguing idea to create “laneway punctures” that could add to this shared street feeling. Inspired by the plants that grow in any available crack in the concrete, they propose creating a groove in the drainage channel of a laneway in which to plant hardy low-lying plants. Such a groove wouldn’t interfere with travel but would add an element of variety and the unexpected to a laneway. Such variety is a core element of shared street design, serving to encourage drivers to pay greater attention and slow down as a result. (Street art can serve the same purpose).

While we often focus on street art and cool little houses when we talk about laneways, thinking of them as shared streets reminds us of their core purpose, which is transportation and circulation.

However, there are several issues that impact the use of laneways for walking and cycling:

Despite these issues, laneways can work as an attractive “off-road” route for pedestrians and cyclists within the city, a quiet and low-traffic escape from busy streets.