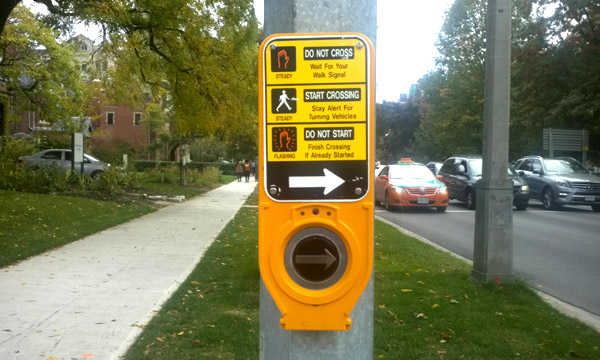 I’ve seen a few inquiries recently by people who noticed pedestrian signal push-buttons being installed at major intersections. They found it odd and wondered if they would now be required to press a button to get a pedestrian signal even at pedestrian-heavy locations.

There’s a lot of (justified) confusion around pedestrian signal buttons and how pedestrian signals work, so I thought I’d write up a definitive guide to them as a reference. (Some of this information is updated from an article I wrote in the Summer 2010 issue of Spacing, but it is not available online; see also the City of Toronto Traffic FAQ).

At intersections of two major streets, pedestrians do not need to press the button (unless they need the audible signal).

Pedestrian buttons at major intersections do not control the visual pedestrian signal (walking man/amber hand symbols). They are there to activate the audible signal for people who have visual impairments (the chirping sounds). The pedestrian lights at these major intersections always change with the traffic lights, which operate at fixed-time intervals in both directions.

At intersections of minor and major streets, pedestrians do need to press the button if they want to get a walking signal.

At these intersections, the pedestrian button activates the traffic and pedestrian signals in the minor street direction. (The signal is also activated by cars waiting at the intersection, though electromagnetic wires under the asphalt. If you look closely you can see the outline where they have been placed. Theoretically, bikes can trigger the signal too — in some places, there are three dots on the asphalt which signal the best place for a bike to trigger it).

These are called “semi-actuated” signals. It’s “semi” because the actuation is only necessary in one direction. (A fully-actuated signal would be one in which the other direction also didn’t change until it was triggered).

Can one tell the difference between the buttons you do and don’t have to press?

As far as I can tell, no. There is nothing about the buttons that indicates whether they are just for the audible signal, or for the actual traffic light. The new style of button (see image above) is installed for both situations. You kind of have to guess based on the size of the two streets. Usually it’s pretty obvious, but there are probably cases where it’s ambiguous.

[A week after I published this post, I realized there might be one way to tell. If there is only one button at each corner, with buttons only for crossing one of the two streets, then it is semi-actuated. Audible signals are needed in all directions, meaning there are two buttons at each corner. However, it’s possible that eventually semi-actuated intersections will also have audible buttons in the other direction, making things even more confusing].

Wouldn’t it be a good idea for the City to provide some kind of differentiation?

Yes, that would be a good idea. It would save wear and tear, avoid confusion, and make this long, absurdly detailed blog post less necessary.

A simple sign like “For audible signal” on the major intersection buttons might be all that’s needed (note: people with visual impairments already know how it works. This sign would be to reassure others they don’t need to press it).

Pedestrian signals have to show the white “walking man” symbol for at least 7 seconds. They can show it for much longer if the signal is long.

The amber pedestrian countdown signal time is based on an estimate of walking speed. It used to be based on a walking speed of 1.2 meters/second (so, it counted down enough time for people to cross at that speed).

In recent years, however, the city has been adjusting this speed to 1.0 meters/second at [all] intersections to give pedestrians more time to cross. This change is motivated by pedestrian safety, especially for seniors, whose average walking speed is slower. Seniors are the most vulnerable pedestrian age group — there are consistently a disproportionate number of seniors among the pedestrians killed by vehicles in Toronto each year (generally over 50%). As well, as the population ages seniors will likely become an increasingly large proportion of the population, so this change is in part an adaptation to changing demographics.

Why do we sometimes see pedestrian signals count down to zero, then become green again?

[I got further information after the post was published, and this section turned out to be even more complicated than I thought — the text in this section has been changed]

Traffic lights operate on specific time intervals. At most major/minor intersections, in the major direction the light won’t change at the end of an interval, nor will the pedestrian countdown start, unless there is a trigger from the minor intersection. If the minor street signal is triggered by a vehicle only (and not a pedestrian), once the next interval starts the pedestrian countdown signal will kick in at the usual point in the interval. However, just before the countdown ends, the system checks to see if the vehicle is still there and still needs the light (because, if the vehicle is turning right, it might already have had a chance to turn and no longer needs the light). If there is no longer a vehicle waiting on the minor street, the system reverts to green/walk signal in the major street direction at the end of the countdown, instead of changing.

Since there’s no way for the current system to check on pedestrians, the signal always changes if the pedestrian button has been pressed.

As far as I can tell, this system also means that pedestrians potentially have to wait, not just one interval, but one interval plus the whole countdown time, in order to get a signal after they push the button: if you push the button at a point in the interval after the countdown signal would have started in the major street direction, the system has to get to the end of that interval, then go through the next one with the countdown, before it changes. It explains why the wait can seem interminable. Rather often, the pedestrian will have become impatient and found a chance to cross against the light by the time that happens.

At some traffic signals, transit signal priority means that the light stays green for a few seconds after the pedestrian coundown ends. The presence of the transit vehicle keeps the traffic light green beyond the end of its usual cycle (so that the transit vehicle can get through without waiting), but the pedestrian signal has already turned to the solid “don’t walk” hand.

A more walking-positive variation in traffic signals is the “advanced pedestrian signal”, which means that the pedestrian signal turns to “walk” a few seconds before the traffic signal turns green. This allows pedestrians to get into the intersection safely and be more visible before cars start turning. They are most useful at one-way streets and at T-intersections. These can be found, for example, at Adelaide at University, and Bay and Davenport.

The two types of semi-actuated signals

There are in fact two types of semi-actuated (“push the button”) signals. One makes sense, but the other is aggravating for pedestrians.

The “walk” signal comes on even if it’s a car that triggered the signal and the pedestrian button wasn’t pushed.

If a vehicle triggers the signal, but no pedestrian pushed the button, the vehicle signal will turn green but the pedestrian signal will remain the solid amber hand “Don’t walk” signal.

The theory behind this is, if there are no pedestrians, the green vehicle signal can be shorter (because it doesn’t have to last long enough for pedestrians to cross).

This type is not only irritating for pedestrians who are waiting but forgot to push the button (or were unable to because their hands were full, etc), or else who arrived just as the light was changing and didn’t have time to push the button. It is also dangerous. What often happens in this situation is a) pedestrians wait a couple of seconds trying to figure out what is happening, then b) after realizing the actual traffic light is green, they start to cross — but there’s not enough time because it’s a shorter light, and also they lost a couple of seconds trying to figure out what’s happening, so c) they get caught in the intersection as the lights are changing, creating a hazardous situation.

There’s supposed to be a formula for how heavy pedestrian traffic is to decide which type of signal to use. But these are often based on just one day of measuring pedestrian traffic at a particular intersection, which is not often repeated.

While the SA2 signals might make sense in a few very-low-traffic industrial areas, there are actually a fair number in the older parts of the city, where there is pretty consistent pedestrian traffic. My feeling is that they don’t belong in any densely populated part of Toronto.

I’m going to list a few that I know of here, and I invite people to add others that they know in the comments. Once we have a list, I will forward it to City staff for review.

Remember, these are specifically traffic lights where the pedestrian signal does not change automatically with the vehicle signal.

Post-publication changes/additions are indicated by italics within square brackets.