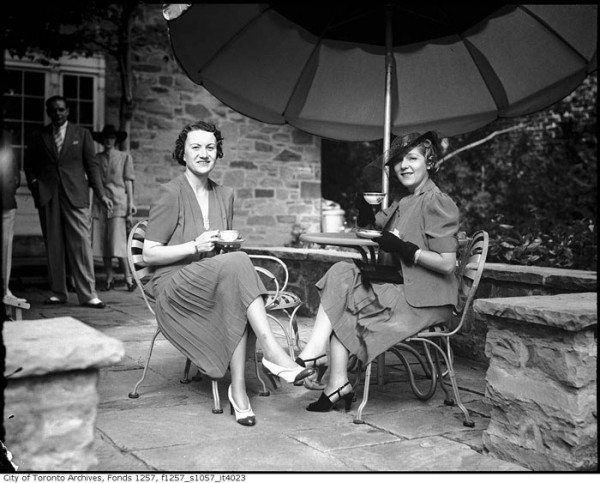 For all the time Torontonians will spend sipping lager and pinot on patios this summer, it would be easy to conclude that the people of this city have always embraced eating and drinking al fresco. Not so. It wasn’t until the 1960s and Yorkville’s counter-cultural era that prudish diners were finally coaxed outdoors en masse.

The St. Moritz On-The-Park—”New York’s only truly continental cafe—opened its own European-style outdoor seating area in the 1950s, followed by numerous others, prompting the writers of the Globe and Mail‘s “over the teacups” society column to wonder why no-one has tried a similar concept in Toronto. “With all Toronto’s new bohemian eating places, there’s nary a sidewalk cafe in the lot. Wonder why not?”

The Globe‘s assertion that there were no outdoor cafes in Toronto wasn’t entirely correct. Ice cream and milk shake stands offered patrons outdoor seating (even during the winter) as far back as the 1920s, and there are pictures of bundled up men hunching over warm cups of coffee during the frigid winter in the city archives. 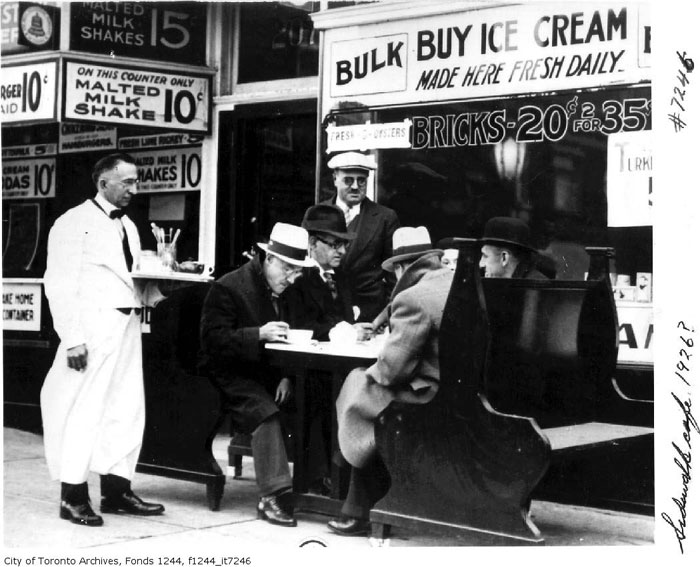 The distinction between a concession stand with a few outdoor seats and a cafe with a sprawling, parasoled patio doesn’t seem to have been made in Toronto until the 1960s. A 1963 Toronto Star story claimed the Sidewalk Cafe at 34 College St. had the first patio, though the real credit appears to lie with its short-lived predecessor at the same location, the French-themed Chateau Briand, which opened in July 1960.

A so-called “new style” restaurant, the Chateau Briand had “bizarre appeal,” according to the Globe and Mail.  A photo accompanying the opening announcement shows a small outdoor dining area skirted by a low wall and planters stuffed with flowers.

“It is hoped [the Chateau Briand] will overcome the history of failure experienced by predecessors on the same location,” the paper wrote. It didn’t. Within three years the Sidewalk Cafe had taken over its location and poached the claim of owning the first patio in Toronto.

Coverage of the grand opening of the Sidewalk Cafe in the Globe and Mail suggests the restaurant had one of the first pizza ovens and Gaggia espresso machines in the city, as well as the first outdoor dining area.

“I have had the calculations for a pizza oven in my head for many years but no-one in this country knows how to build, so I build,” said Venetian-born owner Dr. Pino Riservato. “He expects to make Gaggia and espresso household words in Canada,” wrote reporter Mary Jukes.

Riservato’s grand opening was attended by more than a 1,000 people, including Italian consul Piero Nuti and his wife. The accompanying photograph shows the trio smiling around a table set on the College St. sidewalk. The happiness would’t last. The popular business went the same way as the Chateau Briand and was forced to close after just six months due to financial problems involving its owner. 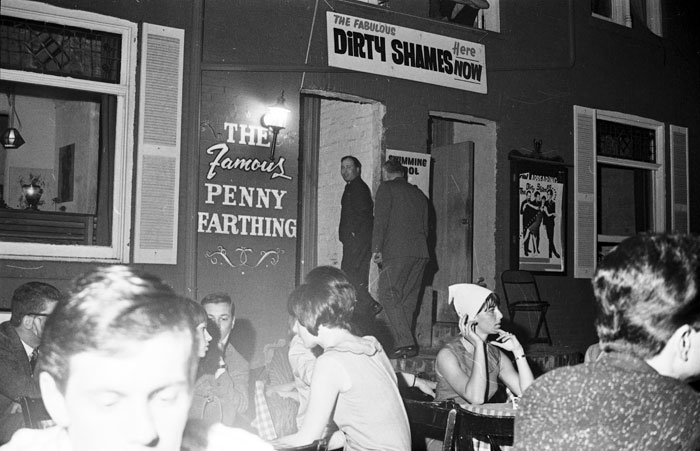 Fast forward to the summer of 1963 and Riservato’s outdoor coffee concept had been taken up in Yorkville, Toronto’s counter-cultural and hippie heartland. “Despite dust, traffic fumes and unpredictable weather, the Toronto outdoor cafe business is enjoying a remarkable boom,” wrote Ralph Thomas a wide-eyed Star reporter. “In the last three months alone, eight new places have opened, doubling the number [of patios] in operation last year.”

Thomas explained how Das Uppenbrau on Yorkville Ave. “tries terribly hard to be ‘a little cafe in Vienna,'” and the Cafe Francais on Scollard St. “is so French that unless unless you speak the tongue, chances are you won’t get what you want.” The Coffee Mill was packed with beatniks “who buy one coffee and stay all night.”

It was the Half Beat on Cumberland St. that was first to adopt the patio concept, he wrote. A small group of tables put outside the cafe proved more popular than those inside, and soon others followed suit.

There were a total of 16 sidewalk cafes in Toronto when the piece was written, some boasting more than 1,500 customers a day. The largest, at the Gaslight on Old York Lane, had room for 200. Das Uppenbrau was the smallest with just 20 seats. “Big or small, chic or rough, they all merchandise the city air, with all its nice waste particles. And Torontonians like it.”

Today, there are 665 patios in Toronto, according to the city’s licensing division. This year alone there were 88 successful applications for outdoor eating or drinking areas, more than five times the total number of patios in the city in 1963.

Toronto has finally learned to love its summer—”dust, traffic fumes, unpredictable weather” and all.