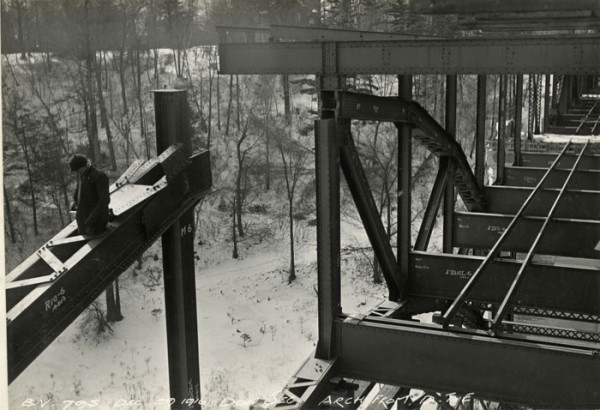 The train deck of the Prince Edward Viaduct under construction in 1916. Courtesy: Toronto Public Library.

50 years ago this week, a special gasoline-powered TTC subway car trundled east along an unfinished Bloor-Danforth line towards the maintenance yard at Greenwood Ave. The east-west subway was still a year from completion, so the vehicle had to periodically halt to let workers clear scaffolding and other obstacles off the track.

When it came time to cross the Don Valley, the car emerged into daylight on what was then a 40-year-old metal platform beneath the road deck of the Bloor St. viaduct. It rumbled over top of Bayview Ave., the brown Don River, and newly-completed Don Valley Parkway before disappearing into the approach to Broadview station.

“We have nothing to report but happiness—nothing wrong happened,” a TTC engineer cheerfully announced once the trip was over.

By successfully crossing the Don Valley via the bridge, a group of senior TTC subway engineers and two Toronto Star reporters had inaugurated the city’s oldest piece of subway infrastructure—a train platform built when the city was still dreaming of “tubes” under Bay St. 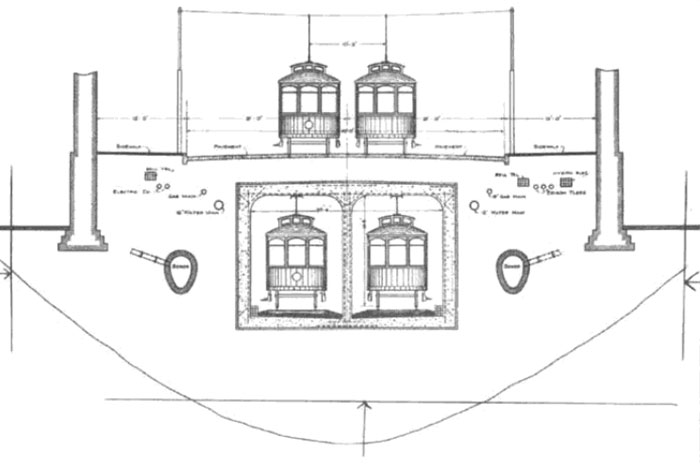 Four decades before completion of the Yonge line, Canada’s first subway, Toronto mayor Horatio Hocken proposed building a covered trench to carry streetcars from the waterfront to the city limit at St. Clair Ave.. Boston and New York had recently opened similar systems, and Hocken was keen to ensure Toronto kept up.

The tunnel would have followed Bay St. before jogging over to Yonge St. at Davenport Rd. Lines under Queen and Bloor streets were also imagined as part of the network.

“Toronto is notorious for postponing the necessary improvements until the cost has doubled or trebled,” Hocken warned. “A rapid transit system must be built eventually and the sooner the better and the cheaper.”

Of course, nothing came of Hocken’s initial proposal. Voters rejected the cost, but the concept lived on. 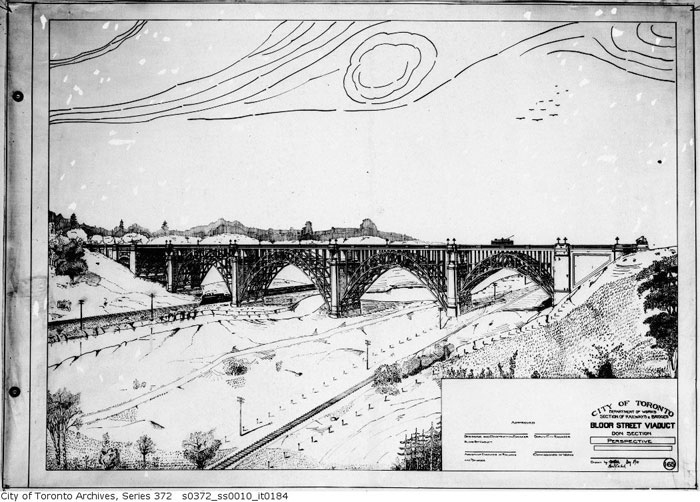 Plan of the Don section of the Bloor St. viaduct. Courtesy: City of Toronto Archives.

A report by New York engineering firm Jacobs and Davies delivered a few years later said a streetcar subway system could be built under downtown Toronto for about $24 million. Part of their proposal would have required trains to cross the Don Valley between Bloor St. and Danforth Ave.. For that to happen, the new viaduct the city was planning would have to accommodate trains as well as automobiles and streetcars.

The train deck added $90,000 to the cost of the bridge (about $2 million in 2015,) but the city thought it would prove to be a prudent investment by the time subway arrived.

Not many realize it, but the Bloor viaduct system actually begins just east of the intersection of Bloor and Sherbourne streets. A heavily landscaped south wall of the Rosedale Ravine carries Bloor St. southeast to the top of Parliament St. From there, two separate steel bridge spans, each with a deck for trains, carry the road to Danforth Ave.. 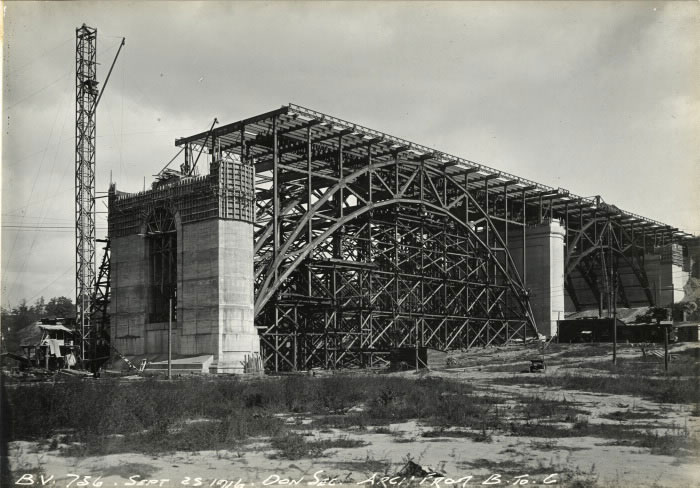 Arches B and C of the viaduct under construction in 1916. Courtesy: Toronto Public Library.

The viaduct project was completed in 1919, but by that time voters had rejected the cost of the first phase of the Jacobs and Davies subway like Hocken’s plan before it. The Globe newspaper was a particularly vocal opponent of the subway costs, calling the idea a possibly “grievous disappointment to the citizens.”

The train deck was still waiting for use in the early 1960s. By then, however, the city had finally secured funding for the Bloor-Danforth line.

Using the lower level of the viaduct lopped $10 million from the cost of the east-west subway, just as the city had hoped decades earlier. Unfortunately, engineers found the curve between Sherbourne and Castle Frank stations would be too tight to use the Rosedale Ravine section of deck, and a separate concrete structure had to be built just to the north.

Between Castle Frank and Broadview stations, trains are still carried by the original superstructure that was riveted together before 1918.

Thank foresighted planning (and a bit of luck) for those spectacular views of Don Valley from your subway seat. 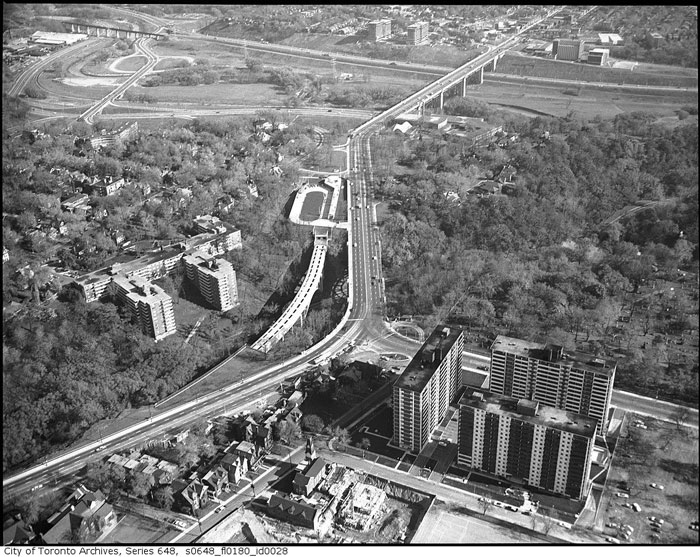 The Bloor St. viaduct system shortly after the opening of the Bloor-Danforth line in 1965. Courtesy: City of Toronto Archives.