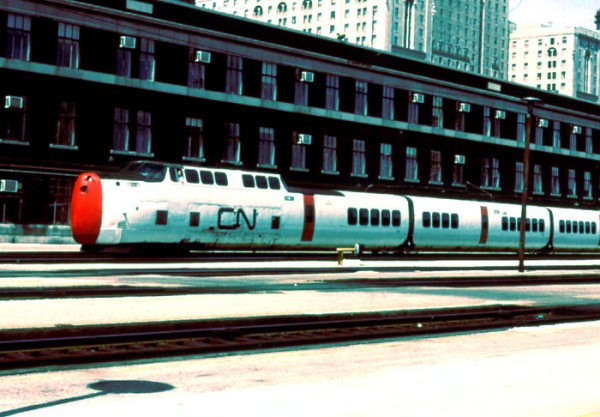 On December 10, 1968, a sleek new locomotive glided out from the sooty train shed at Toronto’s Union Station. Streamlined and silver with a bright red nosecone, the $2-million CN Turbo train looked like a bullet on wheels. With a top speed of 193 km/h, it promised to slash rail travel times between Toronto and Montreal and deliver train travel into the jet age.

Unfortunately, it didn’t quite work out.

Designed by a subsidiary of United Aircraft in the U.S. and built partly in Montreal, the fleet of five Turbo trains were Canada’s first real foray into high-speed, luxury rail travel. Taking the Turbo would be just like flying.

“Passengers will find some similarities with aircraft accommodation even if there are no seat belts and no smoking signs,” the Globe and Mail reported in 1967. “There will be individual wide reclining seats, carpeting and draperies, soft indirect lighting, and individually controlled reading lights at each seat.”

Folding tables in the seat backs, overhead luggage bins, and a meal service would further add to the aviation aesthetic.

Like the Boeing 747, which was also in development during the mid-1960s, the locomotive cars at either end of the Turbo had domed roofs. A glass partition allowed passengers to watch the train engineers at work and look over their shoulders down the track ahead.

CN said the Turbo represented the greatest advance in railway technology in the last 100 years.

Though CN hoped to have the train on the tracks in time for Expo 67, a shortage of parts caused by the Vietnam war and a strike at the United Aircraft of Canada plant in Montreal delayed the launch by almost a year.

Still, the ridership projections more than justified the new service. About 6,000 people traveled daily between Toronto and Montreal by car, train, plane, or bus in 1967, and the railway expected those numbers to double over the next decade.

The first CN Turbo train ran on a test track in October, 1967. In December, a U.S.-owned Turbo hit 274 km/h during a test in central New Jersey. The Associated Press reported the ride was so smooth Rhode Island Democratic senator Claiborne Pell, an advocate of high-speed rail, was able to read the fine print of the Congressional Record.

The Turbo made its Canadian service debut in December, 1968. Two trains, one in Montreal and another in Toronto, departed at the same time packed with reporters. “It’s a world of soft lights, soft music, soft carpeting, and pretty hostesses,” the Globe and Mail reported. The noise from the engines was minimal and there was Rock Cornish Hen on the menu.

The 539-kilometre run to Montreal would take a exactly a 3 hours and 59 minutes—a full hour better than the next fastest CN express—the press was told. The trains could get there quicker, but the high speeds achieved in testing were outlawed due to the roughly 300 level crossings on the route. All Turbos would be capped at 153 km/h—100 km/h slower than the top speed.

The trip progressed normally until Kingston. At a level crossing on Division St., the the Turbo sliced through a meat transport truck, blasting debris high into the air. The crossing was not equipped with barriers and the driver had failed to notice the wagging warning poles.

Shaken but uninjured, the truck driver sipped coffee in a police cruiser while the reporters and train engineers assessed the damage. The big red aluminium and fibreglass nose of the train, which was designed to deflect obstacles, was dented but largely intact. “Well, that proves the throw-aside collision system works,” said a CN employee.

Only an employee manning the crossing required medical attention after he was struck by flying debris. Most reporters watched the accident unfold via a closed-circuit camera mounted to the front of the train. One lucky CP wire photographer managed to snap a picture from the dome of the engine car at the exact moment of impact.

The damaged Turbo was emptied and the reporters loaded on the Toronto-bound train when it arrived on the scene.

“The bar hadn’t even opened when the accident happened,” a Globe and Mail writer noted glumly.

Despite the embarrassing setback, the CN Turbo service commenced as expected. The train proved far from perfect, however. The brakes seized in winter and the exhaust from the engines in the forward locomotive spat soot over the windows. A Turbo caught fire in Toronto in 1970 and frequent technical glitches triggered several prolonged hiatuses, the longest of which took the trains out of service for several years.

When service resumed in 1973, the Turbo trains were longer—nine cars instead of seven—and much more reliable. But still the dream of uninterrupted high-speed service between eastern Canada’s biggest cities proved elusive. Turbos were frequently forced to yield to freight trains, erasing the gains achieved by the high-speed locomotives.

Amid declining passenger numbers and rising fuel costs, CN spun off its rail passenger service in 1978, creating Via Rail. The Turbos were painted a bright yellow and continued to make the Toronto-Montreal run until 1982, when the trains were replaced by the angular, diesel-powered LRCs.

Only two of the four pioneering Turbo train sets made it to retirement. One caught fire near Morrisburg, Ont. in May, 1979, and was written off, and another was used taken out of service early and used as a source of spare parts.

Now, almost 50 years after the debut of the Turbo train, it actually takes longer to get between Toronto and Montreal. Via Rail allows 4:45 for a one way trip. 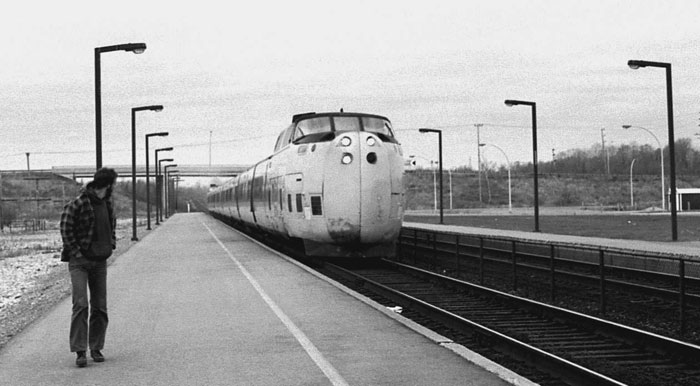 A Turbo train in Via Rail yellow at Kingston. Robbie Sproule/Creative Commons.