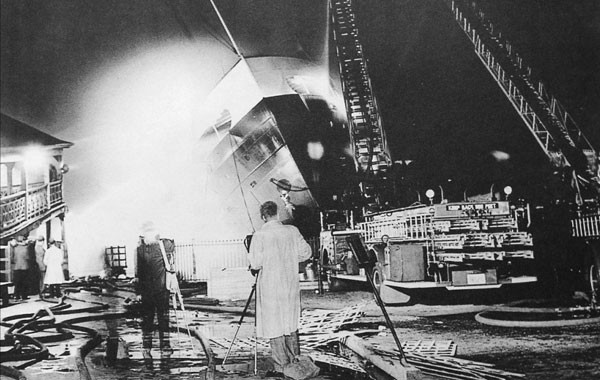 It was late. The Noronic was quiet. The ship was docked at the foot of Yonge Street, gently rocking in the dark waves. Almost everyone on board was already fast asleep. It was two-thirty in the morning; most of those who had enjoyed a night out in the city had come back to their rooms and gone to bed. Hundreds of passengers were tucked beneath their sheets.

Don Church was still up, though, heading back to his room from the lounge. He worked as an appraiser for a fire insurance company, so he knew what it meant when he found a strange haze in one of the corridors. He followed it back to its source: smoke billowed out from under the closed door of a linen closet. The most deadly fire in Toronto’s history was just getting started.

The Noronic had first set sail all the way back in 1913: in the glory days of Great Lakes cruise ships. In the late-1800s and early-1900s, the Great Lakes were filled with luxury liners. The ships carried hundreds of passengers from ports on both sides of the border, steaming across the lakes in style. It was a major industry for nearly a century. As a member of the Toronto Marine Historical Society put it: “At one time there were more people asleep on boats on the Great Lakes than on any ocean in the world.”

The SS Noronic was one of the biggest and most decadent of them all. They called her “The Queen of the Lakes.” She had a ballroom, a dining hall, a barber shop and a beauty salon, music rooms and writing rooms, a library, a playroom for children, even her own newspaper printed on board for the passengers.

But as fancy as it all was, taking a cruise was also very risky. The Noronic was christened just a year after the unsinkable Titanic sank. And even on the Great Lakes, where there weren’t any icebergs lurking in the dark, there was still plenty of danger.

In fact, the Noronic‘s own maiden voyage had almost been a disaster. She was scheduled to set sail for the first time in November of 1913, just as the biggest storm in the history of the Great Lakes rolled into the region. For three straight days, it lashed the lakes with hurricane-force winds, waves fifteen meters high, and torrents of rain and snow. The Noronic was lucky: she stayed in port where it was safe. But more than two hundred and fifty people would die in the storm. So many ships were destroyed that there’s an entire Wikipedia page dedicated to listing them.

Storms were far from the only danger. Ships capsized or collided with each other. They sank. Many — like one of the Noronic‘s own sister ships, the Hamonic — burst into flame. In the early days of the industry, there were essentially no meaningfully-enforced safety regulations at all. And even when the first new laws were introduced, there were loopholes for existing ships. The Noronic was shockingly unprepared for an emergency. But no one seemed to think that was a big deal: for 36 years, she sailed without incident.

Right up until 1949. That September, the Noronic left Detroit for a week-long trip to the Thousand Islands. The cruise brought her to Toronto on a cool Friday night, docked at Pier 9 (right near where the ferry terminal is today). Her passengers and crew streamed ashore to enjoy the city. And when they came back at the end of the night, all was quiet and calm. For a while.

By the time Don Church discovered the source of the smoke, it was already too late. And when he finally found a bellboy to help him, the bellboy didn’t pull the fire alarm; instead, he got the keys to open the closet door. A hellish backdraft burst into the corridor. The flames spread quickly. When Church and the bellboy tried to use a fire hose, the hose didn’t work. Neither did any of the others. Even worse, the ship’s hallways were lined with wood paneling: for decades now, the wood had been carefully polished with lemon oil. It was the perfect fuel for the flames. Meanwhile, stairwells acted like chimneys, funneling oxygen to the blaze.

Eight minutes later, the ship’s whistle jammed while issuing a distress signal and let loose with one endless, piercing shriek. By then, half the ship was already on fire. In a few more minutes, the rest of the Noronic was in flames, too. Survivors later said the whole thing went up like the head of a match.

On board, there was chaos and panic. The safety equipment didn’t work. There weren’t enough emergency exits. Only a few crew members were on duty and they had no training in case of an emergency like this one. Most of them fled the ship immediately, leaving the sleeping passengers behind. People were burned alive in their beds. They were suffocated in their rooms. They rushed along the decks and hallways in flames. A few were trampled to death. Some smashed through windows in their bid to escape, leaving blood pouring down their faces. The most desperate started to jump over the sides of the ship, the lucky ones hitting the water where rescuers — police, firemen and passers-by — were pulling people from the lake. One person drowned. Another hit the pier and died from the impact. Other jumpers didn’t make it clear of the ship; they smashed into the decks below, making them slippery with their blood. When the first ladder was finally hoisted up against the burning ship, passengers pushed forward in such a rush that the ladder snapped, tossing people into the water. They say the screams of the victims were even louder than the whistles and sirens. It was one of the most horrifying scenes Toronto has ever witnessed.

At about five in the morning, just as the first light began to appear on the horizon, the blaze finally died out. Two hours after that, the Noronic had cooled off enough for people to begin the grizzly search though the wreckage. Bodies were everywhere: skeletons found embracing in the hallways, others still in bed, some turned entirely to ash by a heat so intense it could incinerate bone.

At first, the dead were pulled from the wreckage and piled up on the pier, but there were so many that eventually the Horticultural Building at the CNE was turned into a makeshift morgue. (Today, that same building is home to the Muzik nightclub.) For the next few weeks, the authorities struggled to identify the bodies. It was next to impossible. No one even knew how many people had been on board the ship. Some of them were unregistered: guests from Toronto visiting friends. Some had registered under fake names: taking a romantic cruise with someone who wasn’t their spouse. Most of the passengers were American, so their families would have to make the grim journey north to see if they could identify any of the charred remains. Even then, many of the bodies were burnt so badly they were unrecognizable. Entirely new techniques of x-ray identification had to be developed. It was one of the very first times that dental records were ever used forensically. Eventually, the death toll was pegged at 119 lives. To this day, no one is entirely sure that number is quite right. But if it’s anywhere close, it’s the most people ever killed by a single disaster in the history of Toronto.

In the wake of the fire, Canada Steamship Lines paid more than $2 million to the victims and their families. And it didn’t take long for safety laws to be overhauled. For the first time ever, all ships sailing on the Great Lakes would have to meet real, enforced safety regulations. But it wouldn’t be cheap. It cost a lot to sail a big ship that wasn’t a death trap; it was expensive to keep a luxury liner afloat if it wasn’t allowed to burst into flames every once in a while. In the wake of the tragedy in Toronto, the industry collapsed. The golden age of cruising on the Great Lakes in style had come to a bloody end.