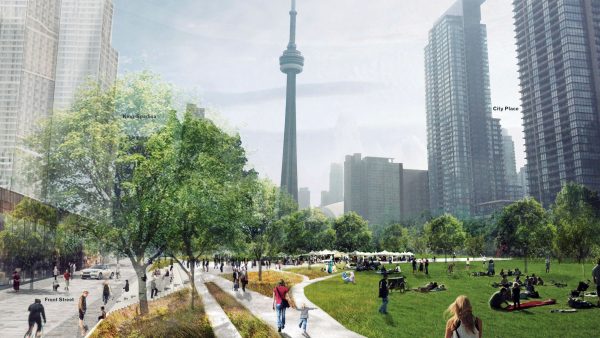 In the last few weeks, City officials made a preliminary announcement about a new “Railway Deck Park” for downtown Toronto. This much-needed initiative relative to a large public space in the downtown has garnered a lot of press; if you put your ear to the ground, you can hear the design, planning, and engineering consultants all lining up to take a crack at this potentially transformative project.

Much has been made about Rail Deck Park having the potential to be Toronto’s “Central Park.” But let’s be clear: the space being proposed is 21 acres while Central Park stretches over 778 acres.

Despite the size constraints, this is an amazing initiative but also one that will present considerable design challenges. After all, it will be a deck, a bridge, and it by its very nature, a green roof.

If you look at the Spadina Ave. bridge now, crossing this area from north to south, you will see in profile that there is a large elevation change on both its edges, and that topographical reality have to be navigated to ensure the deck creates both a universally accessible space and a smooth transition north towards the city and south towards the waterfront.

As well, it is difficult to grow things on a concrete slab. The ecological challenges are great, but not technologically insurmountable. In the end, we want a strong, ecologically functioning and resilient park. The deck, in effect, poses the challenge of creating an ecology on a very thick slab that will bring with it all the difficulties of creating a functioning ecosystem that needs both an up and down functionality, as well as side-to-side integration. The soil medium will be one of the keys to a successful implementation as it will become the working surface to allow nutrients, gas exchange, water retention; all the essential elements for long term growth.

Beyond the technical difficulties of building a green roof, the design needs to address a crucial social question: what is the park’s intended program? Public open spaces are incredibly contested terrains, especially in areas with a deficit in park land. Sport fields? Cultural amenities? Public art? Playgrounds? Water features? Etc., etc. The mind reels at so much opportunity and deciding what is to go where will be an arduous task — one that will require broad consultation and extensive public involvement in a democratic process that meets the needs of existing and future Toronto citizens.

The combination of the technical and programming complexities underscore what, to me, will be the most critical aspect of delivering a successful project, which is leadership, and a project management team that can deal with questions about building codes, bylaws, environmental assessments, zoning, air rights, public consultation, and sustainability objectives.

Most designers, planners and developers will affirm that when it comes to innovation and creativity, the City’s approvals process is broken. Yes, we have thousands of dedicated and hard-working municipal employees working in departments that are woefully understaffed and under budgeted, and hardly equipped to deliver a project of this scale. So who will make up the team to lead this project? Will the task be assigned to municipal officials, or should the City look outside to the broader design world?

I am a great proponent of International design competitions, and the Rail Deck is one such project where this approach is justified. Municipal governments are not fond of competitions: they are risky and they build up public expectations. The continuous worry is the juries will select proposals that are neither implementable nor affordable.

To address those concerns, I suggest, at a minimum, an “ideas competition” with a good prize to attract the best and brightest around the world to look at this design opportunity and give us a suite of creative solutions. The City would not be obliged afterwards to commit itself to any one particular entrant, but the public and the City would have the opportunity to consider what will be probably the most contemporary and innovative ideas.

I have been the Competition advisor/technical for federal projects (Parc Downsview Park) and provincial competitions (Seaton Lands), and have had my heart broken many times. We Canadians/Torontonians always purport excellence, sustainability, and publicness, but in the end these projects seem collapse to the same old mundane and safe approaches — so much potential lost to a conservative mindset.

The legacy of this park goes way beyond our individual and bureaucratic hand wringing. The downfall of many previous competitions and major open space designs has occurred at the point where projects are expected to be “self-funded.” This is usually the death knell for any creative or innovative design.

There is a joke that people have used to describe Canadian conservative-ness: ”Why did the Canadian cross the street? To get to the middle.” We need to get the Rail Deck Park right, and we will just get one good shot at it. My hope is that we don’t fall back on “the same old, same old” compromised and traditional solutions.

Professor Robert Wright is a Landscape Architect, Urban Designer and the director of the Centre For Landscape Research (CLR) at the John H. Daniels Faculty of Architecture and Landscape Design at the University of Toronto. Follow him on Twitter at @wright1000