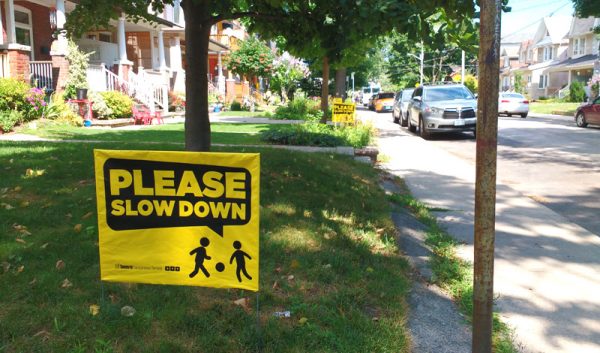 “Slow Down, Kids at Play” lawn signs proliferated in Toronto in the last couple of years as part of a private campaign in the wake of the death of a child hit by a car in Leaside.

This spring, the City of Toronto jumped on the bandwagon by releasing its own “Slow Down” lawn signs, which it branded as its “Spring Safety Campaign.” The initiative was greeted with a certain amount of scorn, given that it is obviously an attempt to look like the City is doing something without spending a lot of money. Indeed, it contrasts with past pedestrian safety initiatives from 2004-05 which involved sustained, professionally created advertising poster campaigns on bus shelters across the city on the theme “Please Drive Carefully – We’re all Pedestrians.”

There was also some scorn about the effectiveness of such lawn signs — a feeling that they may make people feel like they’re doing something, but they don’t actually make a difference in reducing speeds.

However, digging into the literature, there is some evidence that shows that these kinds of signs can reduce speeds somewhat. A study of a similar lawn sign campaign (“Keep Kids Alive”) in Oceanside, California showed that the campaign reduced speeds by 16%.

That may not sound like much, but it could be the difference between going 45 km/hr and under 40 km/hr, or 40 km/hr and 35 km/hr, on a residential street — and we know that even a small reduction in speed makes a big difference in fatalities and serious injuries in this speed range.  One study (PDF, p. 2) concluded that, on residential streets, a 1 mile-per-hour (1.6 km/hr) reduction in average speed would result in 6% fewer collisions.

Many questions remain unanswered — for example, how many signs are needed on a street before they have an impact? Is the effect permanent, or just temporary? More studies would certainly be useful.

But if the signs do work, why would they work? I can think of two possible hypotheses.

First, it makes the environment more complex for drivers by adding another visual element, one intended to stand out. The more complexity a driver has to deal with, the more they will have to process as they drive, and they will tend to instinctively drive more slowly in order to be able to assess it all. That’s why painting the street, adding street trees, shared streets, and naked streets all work, in their different ways, to slow drivers — they push drivers to be aware of their environment rather than just proceed instinctively.

This effect may wear off for habitual drivers on a street, but those drivers may be affected instead by a second possible reason these signs work: that people are influenced by knowing what their peers do or expect. For example, telling people that most of their neighbours voted can make it more likely they will vote themselves. Similarly, discovering that most of your neighbours (or the people on the street that you are driving through) expect you to drive slowly may subtly influence you to behave that way (this is sometimes described as one of the “nudge” techniques for influencing public behaviour).

Finally, another use of lawn signs is reminding city councillors that their constituents think that reducing speeds and increasing safety is important. This might help persuade them to reduce speed limits (as Toronto East York Community Council did on all its local streets) and invest in the real physical changes needed to improve safety (for which Toronto’s recently passed Road Safety Plan is a very limited beginning) — but only if this sentiment is translated beyond everyone’s own local street.

For all that, they remain a temporary, stop-gap measure. And they are focused on residential streets, while most accidents happen on faster main streets (where many people also live). The permanent way to reduce speeds is to reduce speed limits and invest in real changes in infrastructure (bump-outs, raised intersections, narrowed streets, street trees, etc), not only on residential roads but also on main streets across the city.